Is Anybody Surprised that Krugman Was Wrong about U.K. Fiscal Policy?

Your my reason for reason
The step in my groove
Cause you're so smooth... 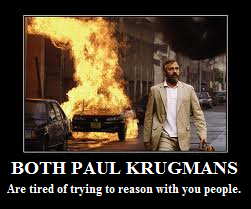 "So, shut up already, you Austrian wingnuts!" he said.

Just like in the United States, politicians in the United Kingdom use the deceptive practice of “baseline budgeting” as part of fiscal policy.

This means the politicians can increase spending, but simultaneously claim they are cutting spending because the budget could have expanded at an even faster pace.

Sort of like saying your diet is successful because you’re only gaining two pounds a week rather than five pounds.

Anyhow, some people get deluded by this chicanery. Paul Krugman, for instance, complained in 2011 that:

“the government of Prime Minister David Cameron chose instead to move to immediate, unforced austerity, in the belief that private spending would more than make up for the government’s pullback.”

Now we have some new numbers that confirm that the UK economy is suffering because of a heavy burden of government spending.

Here’s some of what Allister Heath, the Editor of City A.M., wrote for the UK-based Telegraph:

"The public finances are deteriorating again, making a mockery of the Coalition’s core purpose. Osborne’s fatal problem is that he is proving unable to deliver any meaningful reduction in the size of the state. The extent of his failure will come as a shock to many. Remarkably, public spending actually went up last year as a share of our national income… public spending hit 49pc of UK GDP last year, a shocking increase on the 48.6pc of GDP spent by the state in 2011. Even with a stagnant economy, this implies that Osborne has lost control of public spending."

Gee, doesn’t sound like much budget cutting to me.

Heck, the burden of government spending is worse than it is in Germany (45 percent of GDP). Or even Spain (44 percent) or Portugal (47.4 percent).

Perhaps the most shocking number is the one showing that the UK has radically veered in the wrong direction this century.

Allister hits the nail on the head:

"…after all the rows about “slashing spending to the bone”, and following almost three years of coalition government, the state is still spending around half of national income. …it beggars belief that a government that remains so large, so bloated cannot provide much better quality services, and that we have a public debate in this country that exaggerates beyond all recognition the extent of the state’s downsizing."

But there has been some “austerity,” but only for taxpayers...

"…real austerity is only biting on the tax side: total UK government revenues increased from 40.3pc of GDP in 2011 to 42.4pc in 2012, the OECD estimates. It’s getting increasingly hard for the Chancellor to extract revenues, with taxes on income and wealth falling to £194.3bn over 2012 as a whole, 2.7pc lower than in 2011, when they stood at £199.7bn, according to separate figures from the Centre for Economics and Business Research."


That last sentence, by the way, shows the Laffer Curve in action.  The supposedly Conservative government of Cameron and Osborne has raised the tax burden, yet revenues aren’t materializing.

Allister also echoes the argument of Veronique de Rugy about choosing the right kind of austerity and reining in the public sector:

"Not all kinds of austerity were created equal: cutting current expenditure, such as benefits, is good for growth; but hiking taxes is bad for it… There is also lots of evidence that elevated levels of public spending and large government debts are bad for GDP; no wonder, therefore, that growth is failing to materialise."

So what’s the bottom line? Well, as Allister stated, the real problem is that government is too big and spending too much.

And until Cameron and Osborne are willing to tackle that problem, don’t expect much positive from the United Kingdom.


In the UK, "Austerity" Means Spending More Than The Socialists In Labour Did...And, Those Bastards Bankrupted The Country
Europe, How Can You Have Any Pudding If You Don't Eat Yer Meat?

This Is The Dawning Of The Age Of "Austerity"?
The Debate over Austerity Continues
Obama To France: Do As I Say Not As I Do, Mon Cher
Here's A Secret: Austerity Does Work & Here's The Biggest Example Of It...Ever
Voting For Yesterday In France
Bambino, My Cash Money
Europe's Demographic Deficit Grows Wider By The Day
We've About Run Out of Other People's Money
Big Government Robs The Middle Class Because That's Where The Money Is!
England:  It Was Fun While It Lasted
Europe: Those That Refuse To Learn History...
Watching The World Wake-Up From Its Socialist Stupor

Man it's a hot one
Like seven inches from the midday sun
I hear you whisper and the words melt everyone
But you stay so cool
My munequita, my Spanish Harlem Mona Lisa
Your my reason for reason
The step in my groove
And if you say this life ain't good enough
I would give my world to lift you up I could change my life to better suit your mood
Cause you're so smooth
And just like the ocean under the moon
Well that's the same emotion that I get from you
You got the kind of lovin that can be so smooth
Gimme your heart, make it real
Or else forget about it
I'll tell you one thing
If you would leave it would be a crying shame
In every breath and every word
I hear your name calling me out
Out from the barrio, you hear my rhythm from your radio
You feel the turning of the world so soft and slow
Turning you round and round