If only those vets were criminaliens!

Part of me wants this to happen.  Let Obama rip off the mask and show the country that this is what he is in a nutshell.

In Obama's Amerika, veterans actually have to fight to see their own memorials, which aren't staffed when the government is open. 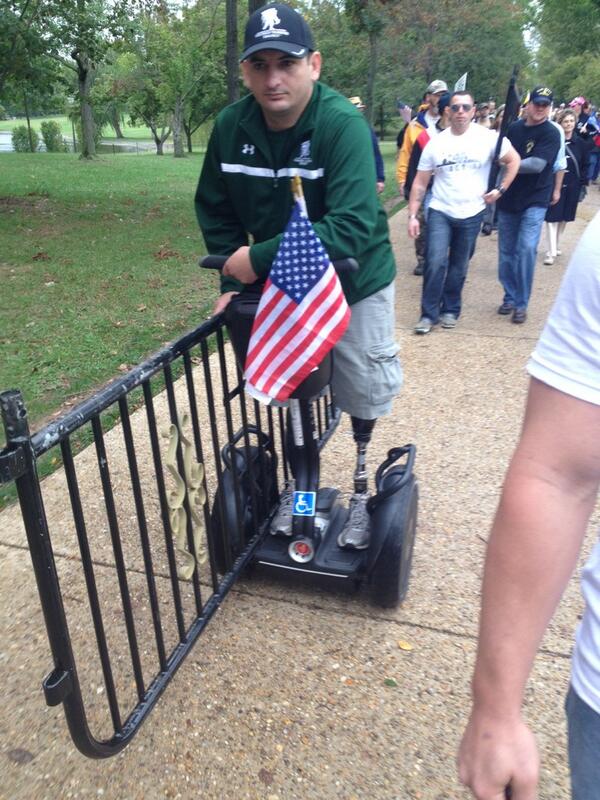 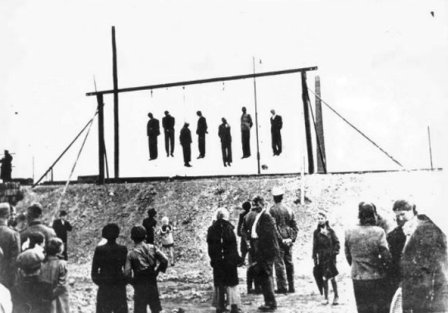 It DIDN'T work At Nuremberg. Some pics from Grae Stafford: 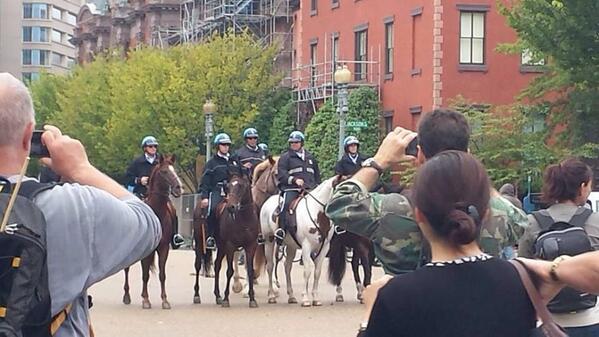 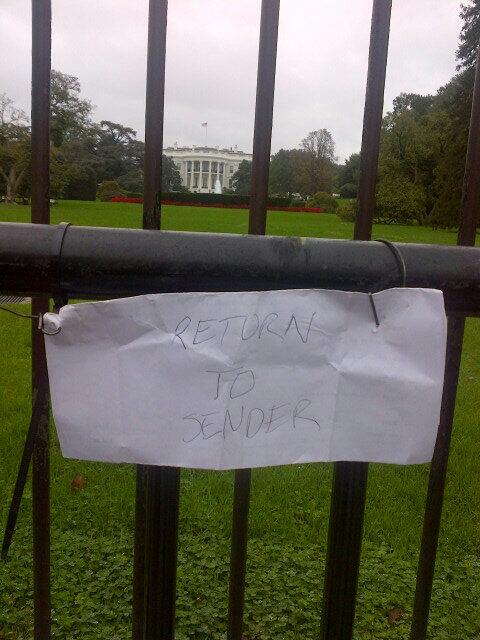 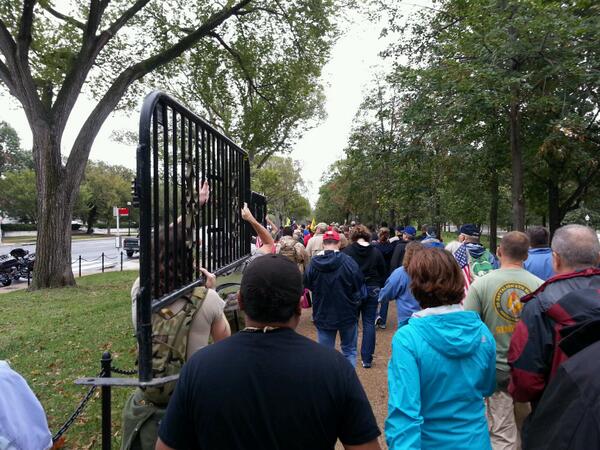 Returning the Barrycades to the White House 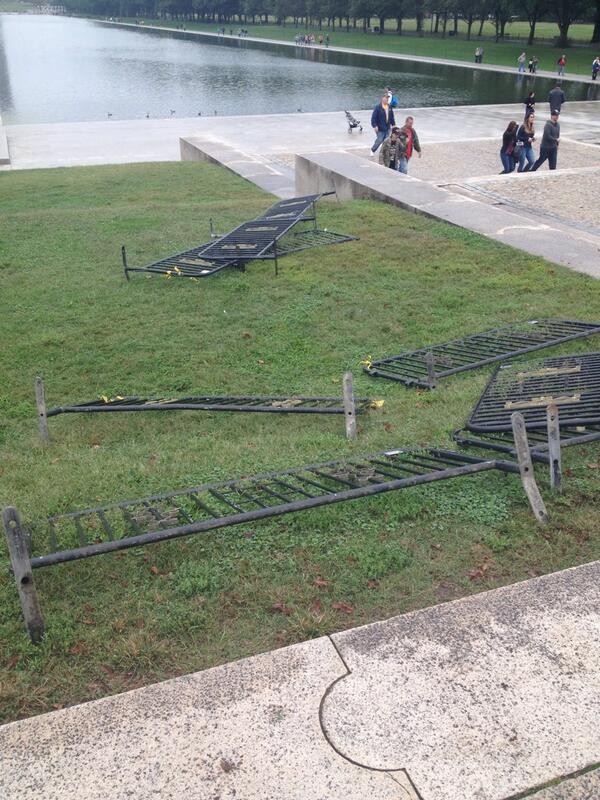 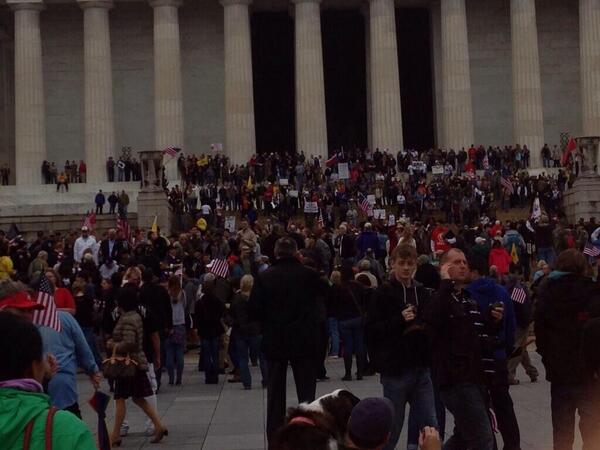 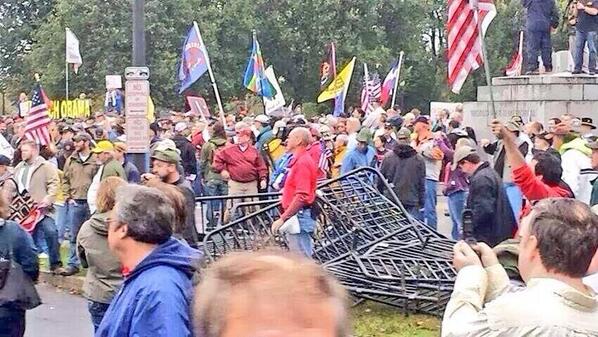 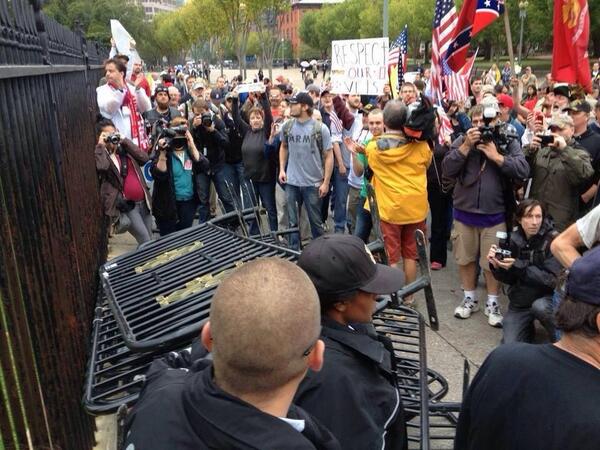 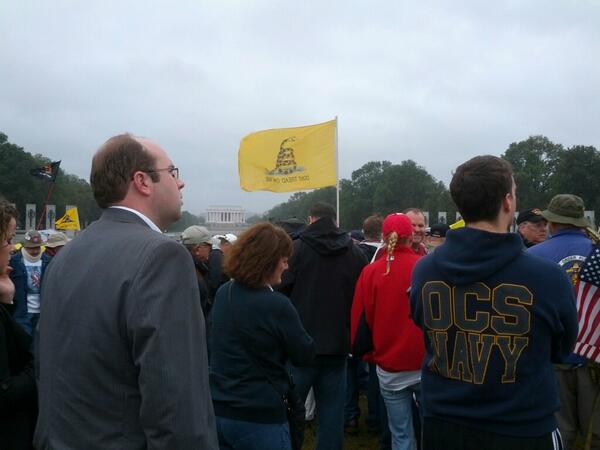 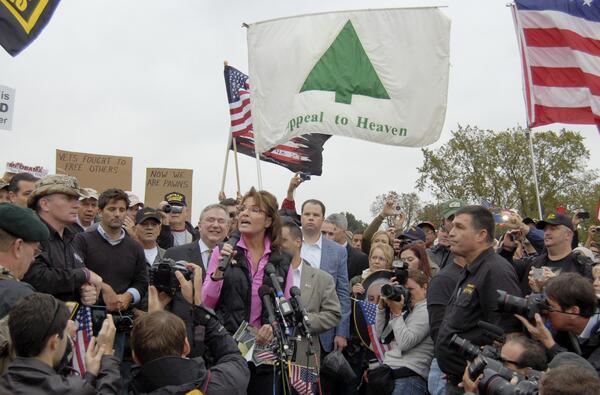 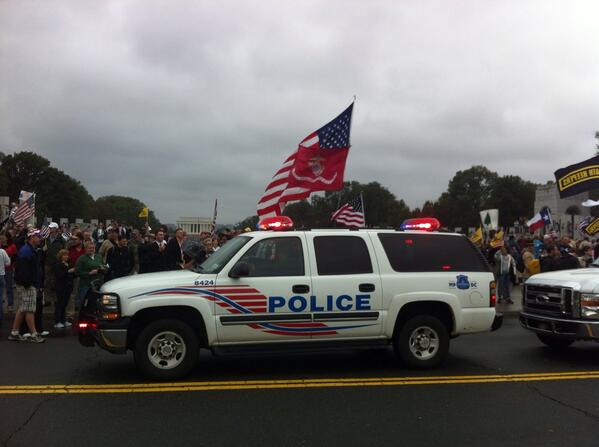 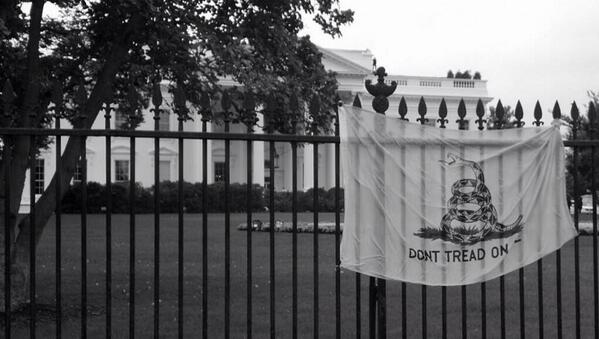 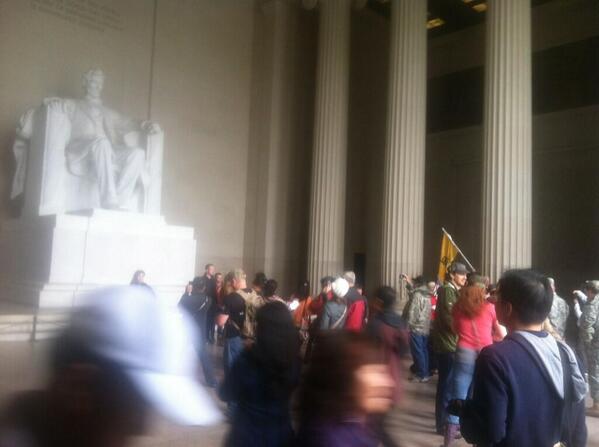 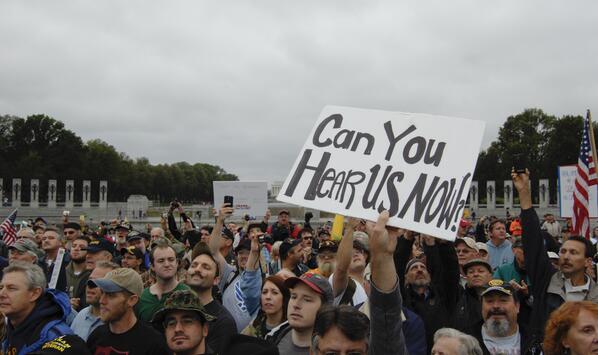 And, here's Obama's Gestapo putting hands on vets while holding billy clubs.  Watch the old vet push one of the storm troopers back after she makes contact: 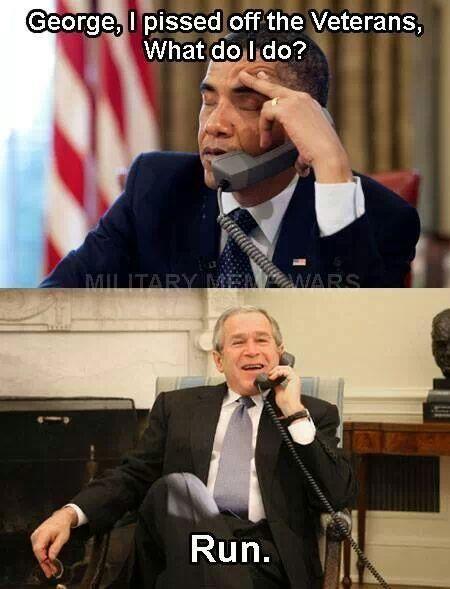 And, boy, did he!  He left the White House aboard Marine One this afternoon.


A tutorial for Barack Obama:


How To Thank A Solider By George W Bush According to Lynch, he and "several women" were assaulted by police during the protest.

"I had words with one cop who hit me," he wrote on his Facebook page.

Lynch said the incident happened after protesters brought barricades to the White House.

"When they got to the White House they stacked the barricades. It was wild. The police came in.

They demanded we move away from the fence. But nobody was doing anything wrong? It was peaceful. However they used force. I was literally right there the entire time," he wrote, explaining that he was protecting a boy who was being trampled by the crowd.

He emphasized the veterans and the other protesters were not violent.

"They were honest, true, respectful to those around them and NEVER ONCE did anyone lift a hand," he added.

Lynch also said he witnessed officers "whack" an older women with night clubs in a scene he described as "out of control."

Later, he said he "misreported."

"My last post said I witnessed a woman get whacked with a night stick. What I should of said was 'several women,'" he posted.

An hour later, he posted another picture and said it was another woman struck by officers.

According to Lynch, the woman was a peaceful protester.

Lynch said in his post that he would appear on Megyn Kelly's Fox News program Monday at 9 p.m. Eastern time.

"On a positive note, as I told thousands of people today when I opened the ceremonies... America is back. No more sleepwalking," he added.

This is the only video I can share right now. It's towards the end of the White House events. Let me explain how this all happened...The VET march was a huge success. Thousands of people attended. I opened the ceremony with a short speech. Then other spoke including Palin and Cruz. The vets took down the barricades and tossed them in a pile near the street. Then the truckers came in. It was simply insane it was so cool. Then the cops tried to block the truckers. That's when things started to get loud. Every VET was cool, calm and collected despite the BS being put forward by the police. Then a taxi driver got pissed because of the traffic and got out of his car and started fighting with the VETS. I captured all of this. The VETS showed unbelievable restraint.

Then the rally ended. Everyone went over to the Vietnam Wall. But I chose to go home to catch the ladder part of my daughter's birthday party. As I was walking to Amtrak, I saw two buses stuck at the corner led by BIKER escorts. I asked the BIKERS, "What's wrong?" He answered, "They won't let them out." The bus was literally 500 feet from the Memorial and yet to cops would not let the 90 year old men out. They had to be wheeled down the block. It was pathetic and I seriously lost myself. I walked off and cried because I was so angry. God must have made me walk away, because when I went to the side to catch myself I looked up and saw something unreal.The VETS who were at the Vietnam Wall had grabbed the barricades and started carrying them to the White House. By this time the media had left. So I am there by myself watching a thousand people march to the WH. Many of them younger men carrying barricades.

When they got to the White House they stacked the barricades. It was wild. The police came in. They demanded we move away from the fence. But nobody was doing anything wrong? It was peaceful. However they used force. I was literally right there the entire time. Not 10 feet back, not 20 feet to the side.... RIGHT IN THERE. I had words with one cop who hit me. If FOX doesn't use the video, I will. It has profanity but I was protecting a little boy who was being trampled. LET ME SAY THIS LOUD AND CLEAR... The VETS and the protestors were not violent. They were honest, true, respectful to those around them and NEVER ONCE did anyone lift a hand. I swear on my life.

Here is the little video I capture on my cell. My camera went dead by this point. It's nothing outrageous, but it's enough to share and to sense what was going on. And let me say, again, I will be on Megyn Kelly tomorrow at 9pET. I hope they make this into a multi-night special because there is so much to cover.

Typos... I am on a cell phone. Please give me some slack. And also, I am in no mood for BS. If you write something asinine, you're banned. Sorry to pull the boss routine, but if I read one more BS comment....

under the pic of odumbo ask GWB what he should do, put a pic of marine1 taking off from the spitehouse..

I have to save these pictures. I cannot tell you the emotions they create in me. Pride and awe for those who stepped up. Sickness for the heavy hand shown to citizens in a free nation with a right to assemble that is now reserved only for the chosen. My father served in WWII. He was in Europe from the battle of the Ardennes to Berlin. He is gone now, but someone is still fighting to keep us free. We are not slaves of the State. Shame on the arrogant tyrants who would force free men to kneel before them. We shall not kiss the heels of the Tsar. God bless all who came together. Thank you for these pictures. MW Southgate, MI

My father was OSS during WWII. His job was to stymie the enemy throughout Europe, gather intel and destroy a Nazi tyrant. If he were alive today, he'd easily recognize the same tyrant, this time sitting in the Spite House. My husband is a Vietnam Vet, when he returned, he was spit on by the same people that populate this administration. This cretin is a disgrace and all who follow him are enemies of freedom.
God bless our Vets, God bless those who supported them today and God bless the United States of America.
Sidenote: If anyone thought that local LEOs/Paramilitary police wouldn't turn on citizens in the name of Obama, this is a wake up call. It's gotten farther out of control than we think.

I am the one with the hat on with the black guy in my face. I wasn't moving and I told him at first he needed a tic tac as his breath smelled so bad. When he said what was I going to do about it, I told him to go ahead and touch me and if he did, I was going to hurt him. The guy on the left with the grey hair then moved him out of the way for his safety. I believe he should have left him alone to take what was coming.

DID YOU KNOW THAT THAT THE CRIMINALS/PUBLIC SERVANTS THEY DONT WANT YOU TO KNOW THAT THEY WANT TO DO AWAY WITH THE GRAND JURY ?
ALL THE PRISON'S ARE BEING FILLED BY THE JUDICIAL/JUSTICE SYSTEM WHEN THEY WERE SUPPOSE TO PROTECT US ! COMPARE THE 11 AMENDMENT WITH ARTICLE 3 SEC.2
SEE IF YOU CAN FIND THE CONFLICT BETWEEN THE TWO OF THEM . WAKE UP !!!

Really, really hard to pick any favs!
This is probably the only site where that "one" Confederate Flag is not seen! Thank you!
Between the little girl holding the small flag or the police helping tear down the barricades? The 'little girl with a flag' is my choice for best picture of "terrorist" :) in action!