Picture of the Day: President SCoaMF 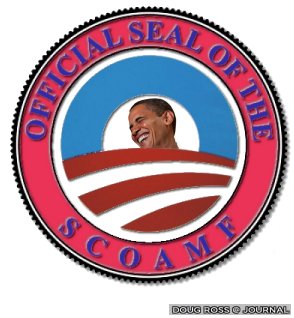 Stuttering Clusterfuck of a Miserable Failure.

SCoaMF:  An empty suit propped up by the media reading old tired Marxist tripe from a teleprompter.

A vapid celebrity or politician incapable of originating or uttering a coherent thought without a teleprompter or cue cards.

Someone demonstrably stupid and yet convinced of their own infallibility, even though unable to think or emote.

A politician or celebrity who has no resume, no plan, no clue, and cannot speak without someone telling them what to say.
Did you hear that Obama has decided food stamps create jobs?


1973:  Fauxcahontas listed 'white' on her application to Rutgers Law School and when asked  'Are you interested in applying for admission under the Program for Minority Group Students?' Warren answered 'no.'

1981-1986:   A University of Texas personnel document shows that Warren listed herself as 'white' when she taught at the law school there.  Warren’s employment document at the University of Texas allowed her to check multiple boxes specifying 'the racial category or categories with which you most closely identify.' The options included 'American Indian or Alaskan Native,' but she chose only white.

Why is the Left celebrating this white fraud, who took the place of a well-deserving, real-life Native American?

How is what she did 'fair' to actual Native Americans and other minorities?

“In a 2010 paper, for instance, the New York University political scientist Patrick J. Egan compared polling in advance of state same-sex marriage referendums to the actual results, and found that the share of voters in pre-election surveys saying that they will vote to ban same-sex marriage is typically seven percentage points lower than the actual vote on election day.

That seven-point gap between appearances and reality may help explain why same-sex marriage supporters lost referendums they expected to win in liberal states like Maine and California. And it explains why a savvy White House might take polls suggesting that the issue is a political winner with a very large helping of salt.”


“Put simply, the issue of gay marriage remains highly contentious in a number of swing states: a majority of voters in North Carolina, Ohio, Virginia, and Florida continue to be against same sex marriage.

And according to a recent Pew poll, one in three Southern swing voters are strongly opposed to gay marriage.

All of this in light of the fact that ballot measures to legalize gay marriage have been rejected by voters nearly every time over the course of fifteen years by voters in more than 30 states — often by large margins.

Among the 30 states that have constitutional amendments banning same-sex marriages are key battleground swing-states like Florida, Ohio, Virginia, Colorado, Pennsylvania, Michigan, and North Carolina. These states have a combined 114 electoral votes up for grabs.

In light of these numbers, while yesterday’s move may be a political winner for President Obama among his progressive base, it may very well cost him the support of swing voters whose vote will be central to his success in winning reelection.”

Yes, it is true that polls show that a majority of Americans support SSM, but I would take them with a few grains of salt for a couple of reasons.  First, there is very obviously a Bradley Effect going on because the polling data never reflects the actual vote tallies.  No one was surprised that the constitutional amendment passed in North Carolina.  Nearly everyone was shocked by the margin of the victory for the opponents.

This Is The Dawning Of The Age Of "Austerity"?

I think that, somewhere over the Atlantic, the definition of "austerity" was lost in translation for "austerity" in Europe does not mean what Americans think it means.

A €2.2 billion stimulus package 2009, 1.25% of GDP, resulted in economic growth that stayed negative and 3 million more unemployed Portuguese workers.  The country's finance minister told the New York Times, “it didn’t turn things around, and may have made things worse.”

The automatic indexation of tax brackets for inheritance, wealth, and income taxes ended.

Corporate taxes were raised 5% on businesses with revenues of more than €250 million.

Excise taxes on tobacco and alcohol were hiked.

There were some reforms to entitlements and welfare programmes, but they haven't yet taken effect.  For example, France raised its retirement age from 60 to 62.....but that reform will not take effect until 2017.  Also, the cap on government spending on healthcare doesn't take effect until next year.

It is kind of hard to blame cuts that haven't taken effect for France's slowing growth while ignoring tax increases that have. One of the first "austerity" measures taken by the Cameron-led coalition was the imposition of a 50% income tax on the "evil rich."  This hike resulted in a £509 million decrease in tax revenues to the Treasury.

The Coalition did trim some government payrolls and cut back on a few government programmes, but government spending still consumes a whopping 49% of GDP.

Most importantly, actual government spending increased by £59.2 billion from 2009 to 2011.

Increased taxes nearly twice as much as it cut spending.

5% surtax on the wealthy.

As Michael Tanner of CATO has said, "It should come as no surprise that all those new taxes, combined with a lack of spending restraint, has threatened to throw Europe back into a double-dip recession. Is it any wonder that French, Greek, and British voters were anxious to “throw the bums out”?  Wait, this sounds familiar. Tax hikes on the rich accompanied by vague promises of future spending restraint, while refusing to restructure entitlement programs. That sounds a lot like . . . Barack Obama.  Maybe the U.S. can learn something from Europe after all."

Too bad that Obama is too stubborn and ignorant to heed the lessons of "austerity" in Europe.


Below is the OECD data, as is clearly apparent, no country is spending below its 2004 level. 
Watching The World Wake-Up From Its Socialist Stupor

This Is The Dawning Of The Age Of "Austerity"?

The Debate over Austerity Continues

Obama To France: Do As I Say Not As I Do, Mon Cher

Here's A Secret: Austerity Does Work & Here's The Biggest Example Of It...Ever

In the UK, "Austerity" Means Spending More Than The Socialists In Labour Did...And, Those Bastards Bankrupted The Country

Europe, How Can You Have Any Pudding If You Don't Eat Yer Meat?

Uber Alles After All

We've About Run Out of Other People's Money

Give Me Liberty Or Give Me Death...You Can Keep The "Equality"

The Taxman Cometh Differently On Either Side Of The Pond....Although Probably Not For Long Divide

England:  It Was Fun While It Lasted

Europe: Those That Refuse To Learn History...