Did Obama Throw A Beer Summit?

The Answer Is Obvious

Nazism Was Not Based In Christianity

Why Anti-Semitism Is Moving Toward The Mainstream

Memo to Jews: After They Come for the Catholic Church, They Will Come For Us

Judge Richard Goldstone’s Mea Culpa, in the Pages of the New York Times!

Ron Paul: All Aboard! Ha Ha Ha Ha Ha Ha Haaaa! Mental Wounds Still Screaming! Driving Me Insane I'm Going Off The Rails On My Crazy Train! (And I Want To Take You Along For The Ride)

Update on Norway: The Poison of Multiculturalism

The Last Jews Of Baghdad: Just SEVEN Remain (And They Fear For Their Lives After Being Named By WikiLeaks)

If you want to see Glenn Beck frustrated, one of the easiest ways is probably to spew anti-Semitic hate while calling into his radio show. That’s what one caller did on Tuesday. The caller, named Scott, tried to convince Beck that the Jews are the problem in America. And that didn’t sit well with Beck.

Glenn had a pretty nasty caller on radio this morning – one who called former KKK member David Duke a hero as part of an anti-Israel and anti-Semitic rant. Yeah, that didn’t go over so well with Glenn who was already having a bad day.

The call was clearly off to bad start when the caller, Scott, defended David Duke, Occupy Wall Street, and anti-Semitism in the first minute:

GLENN: Okay. I want to go to Scott in New York who is a ‑‑ who says David Duke is his hero. Well, hello, Scott. Welcome to the program.


CALLER: Good morning, Mr. Beck. How are you?


CALLER: I ‑‑ David Duke is my hero, and I’ll tell you why. Because I’d like all your listeners to know that I support the courageous protestors of Occupy Wall Street.


CALLER: And I’ll tell you why. Because they are fighting against international Jewish capitalism.

Scott went on to say that “Jews are the scourge of the world” and that they should be “neutralized.” When Beck pressed Scott on that point, Scott said he said all Jews should be banished to Madagascar.

Co-host Pat was so taken aback by the call, he said that if he didn‘t know better he would have thought it was a prank call by Beck’s producer, Stu.  So why let Scott continue his hate?

Later in the program, Beck delivered an emotional defence of the Jews:

“There is only one space. There is only one country. It has been our charge and our duty. I testify to you now that the only reason this country exists is to be a safe haven for those who are not wanted any place else, whether that be a Jew or you. This is the place and the only place on Earth where man can be safe. The minute, the minute we don’t defend that with everything in us, we are done. The Lord will have no place for us. This is not about our money. This isn’t about our lives. This isn’t about our sacred honor. This is about our sacred duty. What part of the symbol of the Statue of Liberty do we not understand? It is to represent the covenant, the covenant that we have, the opportunity that God and this land will provide. Not for you. Not for me. But for those who have been rejected everywhere on Earth. Watch them. See what they can do. Welcome them.”

You can watch the highlights below: 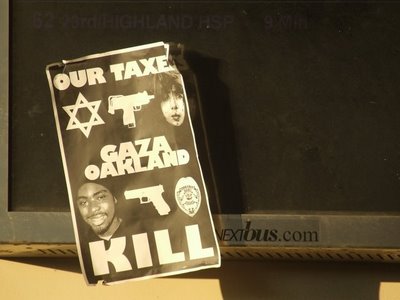 From the Oakland Riots.  There is no need to speak.