Don’t turn around, uh-oh
He’s in town, uh-oh
He’s got the power
And you’re so weak
And your frustration
Will not let you speak.

The Eurocracy's contempt for the nation-states it governs is growing ever more flagrant.

It isn’t often that you are aware of the world order changing before your eyes. Last week, the European Union effectively undermined the democratically elected government of one member state and put another one on notice. The snuffing out of that little gasp of desperate rebellion in Greece, and the political chaos that followed, caused a moment’s embarrassment when the EU leadership had to face down questions about its commitment to democracy. But that blew over quickly enough: there could be no question of disregarding the will of the people, Angela Merkel insisted. The electorate of a country had every right to express its opinion in a referendum if its government saw fit to hold one.

She was seconded in this acceptance of sacred democratic principle by Nicolas Sarkozy, although he was rather less successful in concealing his disgust at the insolence of one wretched little country’s defiance of the great European oligarchy. But the tact and facile diplomacy ran out fast. Pretty soon, the European Union was setting the terms for this impertinent plebiscite: it could not – repeat not – simply be on the bail-out deal. The question would have to be whether Greece was to remain in the euro at all. This pronouncement was then almost immediately ramped up (with questionable legality) to mean that departure from the euro would necessitate leaving the EU itself. And it was this nuclear threat that almost certainly saved George Papandreou.

So the Eurocracy that had been saying only days earlier that Greece could never, ever leave the euro, whatever its people or government said they wanted, was now threatening to expel Greece not just from the single currency, but from the European Union. And Italy got the message soon enough: the EU is out of patience with the bad boys. No more messing around. So having once been adamant that no external agency would be allowed to oversee its country’s accounts, the Italian government announced that it was ready to open its books to the EU and the IMF. Its fiscal policy will no longer be a matter for purely national decision-making, and will therefore be beyond the reach of its electorate. 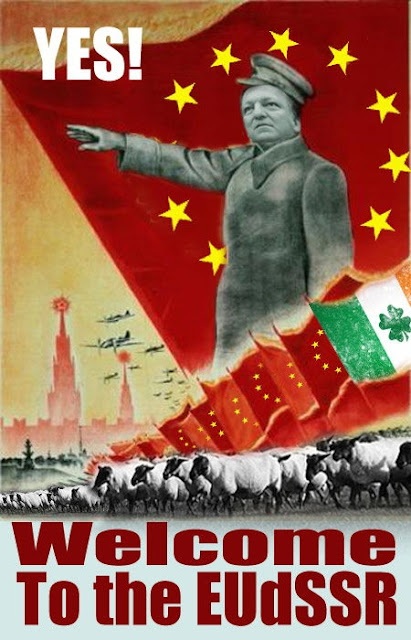 So which is it? Is membership of the euro (or the EU) like being a Soviet satellite: a prisoner nation held in bondage to a superior power? Or is it more akin to being the client state of an imperial benefactor, which can call the shots on internal policy and replace elected governments with puppet regimes when it sees fit?

In the midst of all the earnest blather about respecting the democratic will of countries, there were some revealing slips. (Or were they slips? The proclamations were getting cruder and more unguarded by the minute.) At one point, Mr Sarkozy said: “In no way would I want to give the impression that I’m interfering in [the Greeks’] domestic politics, [but] Europe is our homeland…” Is it? Has Europe – the EU – become the nation state to which all citizens of its member countries are expected to give their allegiance?

Maybe so, and perhaps this is something that a good many of those citizens who regard themselves as enlightened would accept: the Italians who fear the clowns and neo-fascists among their politicians, the French who fear American hegemony, and the Germans who fear the impulses of their countrymen. But if this is the future – if the Eurocracy is determined to dictate the political make-up of all the governments within its membership, declaring out of order or defining out of existence any opposition to what Jose Manuel Barroso calls “consensus and collective spirit” – then how is Mrs Merkel’s precious “will of the people” to assert itself?


If this is now one “homeland”, as Mr Sarkozy would have it, who are its enfranchised electors? Where does the power lie to overthrow or replace its rulers? What are the mechanisms for recalling the governing elite? Apparently, they will have to be foregone in the present emergency. (But where is the promise that they will ever return?) The future of the euro – that grand ideological folly which was supposed to remove any possibility of national self-aggrandisement – must take precedence now. All those quaint assumptions about the legitimacy of government coming from the consent of the governed must be cashed in for the “economic stability” that the rules of euro membership will provide.

What those rules actually provide, of course, is a guidebook for all European peoples in how to behave like Germans – even if their temperaments and historical experience are quite unsuited to this. It begins to look as if those countries least able to do plausible impersonations of German orderliness and productivity will be knuckling under none the less, for fear of being cast out of the European club – or, less sentimentally, being cut off from the feeding tube of support which is all that can sustain them in their present fix.

The governments that might be displaced are unlikely to be missed – incompetent and corrupt as they may have been. But what will go with them is more important: the possibility of electing or rejecting whatever political leadership you, or a majority of your countrymen, choose.

The Greeks have been given a brutal lesson and the Italians a firm warning. Welcome to post-democratic Europe. What an irony that the rise of freedom in the Middle East – the Arab Spring – should coincide with the acceptance of its decline in the West. (The European Autumn?) Is this going to be the big story of the 21st century? Not just the West’s loss of economic dominance to the East, but the wilful dismantling of its political inheritance?

Thus far it has been politicians bending the knee. Whatever their governing classes decide, will Europe’s populations be prepared to sacrifice electoral self-determination? In peacetime, the voluntary renunciation of democratic rights is, so far as I know, unprecedented. But modern standards of prosperity have become so addictive – and Europeans so dependent on “social protection” (another favourite Barroso phrase) – that even the temporary loss of them may be too great a price to pay for an abstraction like political liberty.

Benjamin Franklin once said: “People willing to trade their freedom for temporary security deserve neither and will lose both.” In the present case, you have to insert the word “economic” in front of security, but the lesson still holds. If you lose the right to choose who governs you – or allow some greater authority to determine the limits of their power – what recourse do you have when the promises are broken and “security” becomes a prison?
Sophie:  I raise an interesting point here.  The death penalty is against the law in all EU Member States and the moratorium preceded the EU; however, the Apparatchiks knowing that the next few years in Europe will be some of the worst of times...with a depression, shortages of foodstuffs and medications, etc.  In Greece, there has been and explosion in new cases of patients with AIDS, malaria, Hepatitis.  The numbers are shocking.  A 1250% increase in HIV-infections in 1 year.  Sadly, because of the austerity measures that have to be kept if the country -- for some reason that I can't understand -- wants to stay in the euro.

Getting back to the death penalty:  Interestingly, in the Soviet-like EU with its 27 unelected, unaccountable apparatchiks, the death penalty was reintroduced in a footnote to the Treaty of Lisboa, upon neither the whole nor part of which the overwhelming majority of Europeans were allowed to vote.  In its “explanations” and “negative definitions” accompanying the fundamental rights, the Charter of Fundamental Rights of the European Union allows a reintroduction of the death penalty in case of war or imminent war, but also the killing of humans to suppress insurgency or riot.

I am not a proponent of the death penalty, as it is cost ineffective and most death row inmates die of natural causes after millions have been spent on their cases; however, if there is going to be a death penalty, this is a case for it.

Strangely, the European Soviet can kill you if you riot against or attempt to overthrow it regardless of how justified either are, but kill nearly 77 people like Anders Breivirs Behring?  "Oh,no.  We're Europe.  We are so civilised.  We can't kill mass murderers.  We have evolved...unlike those Neanderthal Americans.  Would you care for some Pouilly-Fuissé et Brie de Meaux?"

Über Alles After All

Two, three, four,
one two three
Nothing about it,
if I tell you the story.
Anyhow,
I am used﻿ to
that it won't run at the TV.
Well she was young,
her heart true and white
And every night got to pay off
She says:" Sugar sweet,
ya got me rappin' to the heat:"
I understand! She﻿ 's hot.
She says: "Baby you know,
I miss my funky friends."
She means Jack and Joe and Jill
I think about what she wants right now
I think﻿ her nose talks about it
While I am smoking,
I mean the special places are well known to her
I mean, she goes by train, too
They sing there:

Don't turn around, oh,oh,oh- watch it
The Chief of Police is going around! Oh, oh,oh
He will watch you
and you know why,
because your pleasure of life is going to kill you.

Everything﻿ all right, Sir?

Hey man, wanna buy some stuff, man?
Did you ever rap that thing Jack?
So rap it to the beat.
We meet Jill and Joe and his brother, Hip.
And, the rest of that cool gang.
They rap it back and forth.
Between that, they scratch the walls.
This is a clear case,
My dear Sir,
even if you don't share that opinion:
Every kid knows nowadays
that snow on which we ride downwards.
Don't turn around, oh, oh, oh, watch it!
The Chief of Police is going around.
If he talks to you and you know why
tell him, your life is killing you.