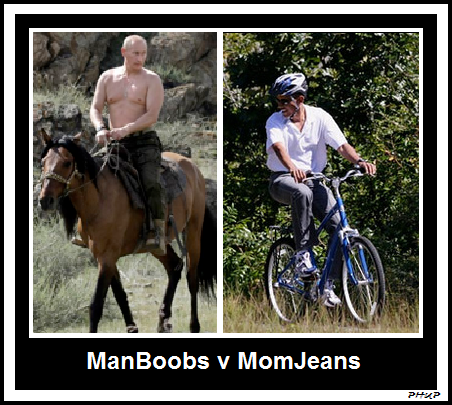 Every American ally is cringing with embarrassment at the amateurishness of the last month.

For generations, eminent New York Times wordsmiths have swooned over foreign strongmen, from Walter Duranty’s Pulitzer-winning paeans to the Stalinist utopia to Thomas L. Friedman’s more recent effusions to the “enlightened” Chinese Politburo. So it was inevitable that the cash-strapped Times would eventually figure it might as well eliminate the middle man and hire the enlightened strongman direct. Hence Vladimir Putin’s impressive debut on the op-ed page this week.

It pains me to have to say that the versatile Vlad makes a much better columnist than I’d be a KGB torturer. His “plea for caution” was an exquisitely masterful parody of liberal bromides far better than most of the Times’ in-house writers can produce these days. He talked up the U.N. and international law, was alarmed by U.S. military intervention, and worried that America was no longer seen as “a model of democracy” but instead as erratic cowboys “cobbling coalitions together under the slogan ‘you’re either with us or against us.’” He warned against chest-thumping about “American exceptionalism,” pointing out that, just like America’s grade-school classrooms, in the international community everyone is exceptional in his own way.

All this the average Times reader would find entirely unexceptional. Indeed, it’s the sort of thing a young Senator Obama would have been writing himself a mere five years ago. Putin even appropriated the 2008 Obama’s core platitude: “We must work together to keep this hope alive.” In the biographical tag at the end, the Times editors informed us: “Vladimir V. Putin is the president of Russia.” But by this stage, one would not have been surprised to see: “Vladimir V. Putin is the author of the new memoir The Audacity of Vlad, which he will be launching at a campaign breakfast in Ames, Iowa, this weekend.”

As Iowahawk ingeniously summed it up, Putin is “now just basically doing donuts in Obama’s front yard.” It’s not just that he can stitch him up at the G-8, G-20, Gee-don’t-tell-me-you’re-coming-back-for-more, and turn the leader of the free world into the planet’s designated decline-and-fall-guy, but he can slough off crappy third-rate telepromptered mush better than you community-organizer schmucks, too. Let’s take it as read that Putin didn’t write this himself any more than Obama wrote that bilge he was drowning in on Tuesday night, when he took to the airwaves to argue in favor of the fierce urgency of doing something about gassed Syrian moppets but not just yet. Both guys are using writers, but Putin’s are way better than Obama’s — and English isn’t even their first language. With this op-ed Tsar Vlad is telling Obama: The world knows you haven’t a clue how to play the Great Game or even what it is, but the only parochial solipsistic dweeby game you do know how to play I can kick your butt all over town on, too.

This is what happens when you elect someone because he looks cool standing next to Jay-Z. Putin is cool mainly in the sense that Yakutsk in February is. In American pop-culture terms, he is a faintly ridiculous figure, with his penchant for homoerotic shirtlessness, his nipples entering the room like an advance security team; the celebrities he attracts are like some rerun channel way up the end of the dial: Goldie Hawn was in the crowd when Putin, for no apparent reason, sang “I found my thrill on Blueberry Hill,” which Goldie seemed to enjoy. In reality, Putin finds his thrill by grabbing Obama’s blueberries and squeezing hard. Cold beats cool.

Charles Crawford, Britain’s former ambassador in Serbia and Poland, called last Monday “the worst day for U.S. and wider Western diplomacy since records began.” Obama set it in motion at a press conference last year by drawing his famous “red line.” Unlike, say, the undignified scrums around the Canadian and Australian prime ministers, Obama doesn’t interact enough with the press for it to become normal or real. So at this rare press conference he was, as usual, playing a leader who’s giving a press conference. The “red line” line sounds like the sort of thing a guy playing a president in a movie would say — maybe Harrison Ford in Air Force One or Michael Douglas in The American President. It never occurred to him that out there in the world beyond the Republic of Cool he’d set an actual red line and some dime-store dictator would cross it with impunity. So, for most of the last month, the bipartisan foreign-policy establishment has assured us that, regardless of whether it will accomplish anything, we now have to fire missiles at a sovereign nation because “America’s credibility is at stake.”

This is diplomacy for post-moderns: The more you tell the world that you have to bomb Syria to preserve your credibility, the less credible any bombing raid on Syria is going to be — especially when your leaders are reduced to negotiating the precise degree of military ineffectiveness necessary to maintain that credibility. In London this week, John Kerry, America’s secretary of state, capped his own impressive four-decade accumulation of magnificently tin-eared sound bites by assuring his audience that the military devastation the superpower would wreak on Assad would be “unbelievably small.” Actually, the problem is that it will be all too believably small. The late Milton Berle, when challenged on his rumored spectacular endowment, was wont to respond that he would only take out just enough to win. In London, Kerry took out just enough to lose.

In the Obama era, to modify Teddy Roosevelt, America chatters unceasingly and carries an unbelievably small stick. In this, the wily Putin saw an opening, and offered a “plan” so absurd that even Obama’s court eunuchs in the media had difficulty swallowing it. A month ago, Assad was a reviled war criminal and Putin his arms dealer. Now, Putin is the honest broker and Obama’s partner for peace, and the war criminal is at the negotiating table with his chances of survival better than they’ve looked in a year. On the same day the U.S. announced it would supply the Syrian rebels with light arms and advanced medical kits, Russia announced it would give Assad’s buddies in Iran the S-300 ground-to-air weapons system and another nuclear reactor. 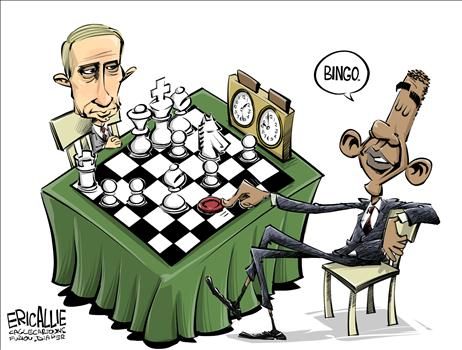 Putin has pulled off something incredible: He’s gotten Washington to anoint him as the international community’s official peacemaker, even as he assists Iran in going nuclear and keeping their blood-soaked Syrian client in his presidential palace. Already, under the “peace process,” Putin and Assad are running rings around the dull-witted Kerry, whose Botoxicated visage embodies all too well the expensively embalmed state of the superpower.

As for Putin’s American-exceptionalism crack, he was attacking less the concept than Obama’s opportunist invocation of it as justification for military action in Syria. Nevertheless, Democrats and Republicans alike took the bait. Eager to mend bridges with the base after his amnesty bill, Mario Rubio insisted at National Review Online that America was still, like, totally exceptional.

Sorry, this doesn’t pass muster even as leaden, staffer-written codswallop. It’s not the time — not when you’re a global joke, not when every American ally is cringing with embarrassment at the amateurishness of the last month. Nobody, friend or foe, wants to hear about American exceptionalism when the issue is American ineffectualism. On CBS, Bashar Assad called the U.S. government “a social-media administration.” He’s got a better writer than Obama, too. America is in danger of being the first great power to be laughed off the world stage. When the president’s an irrelevant narcissist and his secretary of state’s a vainglorious buffoon, Marco Rubio shouldn’t be telling the world don’t worry, the other party’s a joke, too.