Crop Circles, Syria And John Kerry: Why We Don't Believe Our Rulers Any More 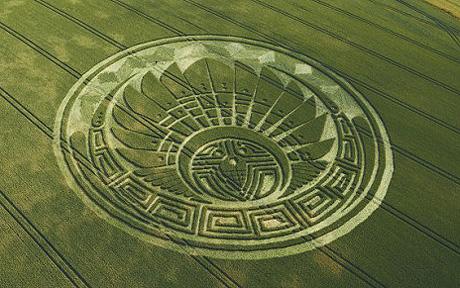 Do you remember crop circles? You know, those pretty but inexplicable patterns that started appearing, every summer, in Hampshire wheatfields, about 20 years ago? I was reminded of them yesterday when John Kerry gave his speech: on Syria and chemical weapons.

Let me explain. I used to believe in crop circles. By the word “believe” I don’t mean that I thought they were made by visiting aliens with Jesus-copters, I mean that I believed crop circles were a genuine scientific mystery, perhaps caused by “plasma vortices” (one of the main theories floating around at the time).

The reason I believed this is because I trusted the word of the greatest “authority” on crop circles, Colin Andrews, co-author of the crop circle bible, Circular Evidence.

When it came to crop circles, Andrews was – around the time of the book’s publication, in 1989 – expert and irreproachable. He had never been fooled by the media. Many journalists tried to make their own crop circle. Yet, every time, Andrews was able to differentiate between the fake and the “real”.

But then we learned that all the “real” crop circles had been made by a couple of pranksters: Doug and Dave – using a stick, some string, and several crates of ale. Colin Andrews was blatantly hoodwinked, in the presence of journalists, by one of Doug and Dave’s bespoke circles. Colin Andrews became a laughable figure.

This is why I find it hard to buy into a single word that John Kerry expressed yesterday. Because John Kerry is like Colin Andrews. He has been publicly hoodwinked before.

Consider this passage in his statement on Syria. “The meaning of this attack goes beyond the conflict in Syria itself, and that conflict has already brought so much terrible suffering. This is about the large-scale, indiscriminate use of weapons that the civilised world long ago decided must never be used at all."

All very fine. Except that, in October 2002, John Kerry pontificated thus: "I will be voting to give the President of the United States the authority to use force, if necessary, to disarm Saddam Hussein because I believe that a deadly arsenal of weapons of mass destruction in his hands is a real and grave threat…"

You see the problem. With their recent history of tragic error, why should we believe Kerry, and western intelligence agencies, this time around? Are these the same intel guys who “found” Iraqi WMD, or have they recruited a new bunch with better binoculars?

Some might argue that we have video evidence of the chemical attack. And we do, and it is hideous. No one can watch it without wishing revenge on the perpetrators. But maybe the attack was made, not by Assad, but by his equally nasty enemies: who really knows for sure? And when someone claims they are certain, how do we know they aren’t “exaggerating”?

This is what the last decade, of political lies, military errors and dubious drone strikes, has done to voters. Before Blair, Bush and the dodgy dossiers, there was a reflexive respect, a feeling that our politicians would not misguide us on something so grave. But now all that has gone.

Today, we don’t trust them. We don’t respect them. And we certainly don’t want to risk a single western life in complex foreign wars, just because some ephemeral politician, bored of deficit busting and keen to moisturise his moral vanity, feels we should.

Coincidentally, as I was writing this, I learnt that crop circles were back in the news. Why? Because they are entirely dying out. It seems that even the most faithful believer has concluded: every single one is a fake.

With all due respect, Mr Thomas, when it comes to John Kerry's ignorance, naïveté, and  being 'hoodwinked,'  we don't have to go back to the debate before the Iraq War.  No, sir.  We need only travel back in time a mere 2 years... ‘Assad is a man of his word who has been very generous with me. Syria will move; Syria will change as it embraces a legitimate relationship with the United States. Syria can play a critical role in bringing peace and stability if it makes the strategic decision to do so.’

‘Israel is an enemy country. I say this loud and clear. It occupies Syrian lands. The FSA will not change its position regarding that country before it withdraws from the Syrian lands, and recognizes the legitimate rights of the Arab Palestinian people.’

Those would be the same ‘moderate’ Syrian rebels that idiots like Kerry want us to aid, assist, and arm.

Democrats: Victims of Their Own Success

America Has No National Interests In Syria & There's No Guarantee That Our Intervention Will Make Things Any Better...For Anyone.