1.  Obama and Syria: Stumbling Toward Damascus by JOE KLEIN(!!!). It’s time for one more PIVOT!

Yeah, Time went there. It used the word ‘pivot.’

At this point, Putin is, basically, doing donuts in Obama’s front yard.


And, the White House and Senator Insane McVain probably agree.

What could POSSIBLY go wrong?  I mean, OTHER, than stuff like this?

This from THE LEADER of the so-called 'MODERATE REBELS':


‘ISRAEL IS AN ENEMY COUNTRY.  I SAY THIS LOUD AND CLEAR. It occupies Syrian lands. The FSA will not change its position regarding that country before it withdraws from the Syrian lands, and recognizes the legitimate rights of the Arab Palestinian people.’


* Abu Osama al Tunisi, the Commander of the Syrian Free Army, pledged allegiance to and said that SFA members were joining al Qaeda; and,

* Colonel Abdul Jabbar al-Okaidi, the head of the United States-backed opposition’s Syrian Free Army, appeared in a video alongside Abu Jandal, a leader of the Al-Qaeda-affiliated Islamic State in Iraq and Syria; and,

* 4 out of 5 Syrian Free Army commanders have demanded that they be able to work with al Qaeda; and,

* Syrian rebels have admitted (and the UN has agreed) that they have used chemical weapons; and,

* The rebels are into cannibalism and beheadings; and,

* The ‘moderate’ rebels have attacked the predominantly Christian village of Ma’aloula, which is home to some of the most ancient Orthodox Christian relics, a major pilgrimage destination, and is on the UNESCO list of tentative world heritage sites – all of which has caused the community of Trappistine nuns to condemn Obama for his silence on the atrocities being committed upon Christians ‘despite all justice, all common sense, all mercy, all humility, all wisdom;’ and,

* They have been committing documented atrocities all over Syria.

Those would be the same ‘moderate’ Syrian rebels that idiots like Obama, Kerry, and McCain are aiding, assisting, and arming.

And, where did they get that idea that these rebels are ‘moderates’? From this woman:

6.  Elizabeth O’Bagy, the advisor to Kerry, and McCain on the Syrian rebels, HAS BEEN FIRED from the Institute For The Study of War FOR LYING!!!

‘But, we can tell the difference between the good guys and the bad guys those with legitimate credentials and those that are lying their asses off.’

Kerry and McVain told us to read her WSJ op-ed to assauge any concerns we had about the ‘moderate’ Syrian rebels and listen to what she has to say because:

‘She probably knows more about the Syrian rebels than anyone and she will tell you that there are far more ‘moderates’ than those associated with al-Nusra and al-Qaeda even though she is a paid consultant for a Syrian rebel advocacy group.’

Her major reports on the Syrian opposition include: ‘The Free Syrian Army, Jihad in Syria, and Syria’s Political Opposition.’


‘O’Bagy’s Aug. 30 op-ed piece for the Journal, “On the Front Lines of Syria’s Civil War,” was cited by both Kerry and McCain last week. McCain read from the piece last Tuesday to Kerry, calling it “an important op-ed by Dr. Elizabeth O’Bagy.” The next day, Kerry also brought up the piece before a House Foreign Affairs Committee hearing and described it as a “very interesting article” and recommended that members read it.’


Obama, Kerry, and McVain have been low-balling the percentage of Islamists among the rebels and telling us that we have nothing which about to worry, but we are supposed to overlook that, arm them, help them, dismiss any concerns that we might have as to what becomes of Syria after Assad, and NOT ask:

‘Why are we being asked to aid our enemy?’

• The men were released on Sunday and have been speaking out about their horrific experience.

• Both men claim they overheard an English-language Skype conversation suggesting Syrian rebels are behind chemical attack.

8. The Laurel and Hardy Presidency: After the Syrian slapstick, it’s time to sober up U.S. foreign policy.

'After writing in the London Telegraph that Monday was "the worst day for U.S. and wider Western diplomacy since records began," former British ambassador Charles Crawford asked simply: "How has this happened?"

On the answer, opinions might differ. Or maybe not. A consensus assessment of the past week's events could easily form around Oliver Hardy's famous lament to the compulsive bumbler Stan Laurel: "Here's another nice mess you've gotten us into!" But, but, but, they're MODERATES!

9. Nun: Syrian Rebels Cut a Little Girl In Half With a Frame Saw While She Was Still Alive (h/t John Hawkins)

'In the village of Estreba they massacred all the residents and burnt down their houses. In the village of al-Khratta almost all the 37 locals were killed. Only ten people were able to escape.

A total of twelve Alawite villages were subjected to this horrendous attack. That was a true slaughterhouse. People were mutilated and beheaded. There is even a video that shows a girl being dismembered alive – alive! – by a frame saw. The final death toll exceeded 400, with 150 to 200 people taken hostage. Later some of the hostages were killed, their deaths filmed.'

It's our fault!  We must bomb Syria and kill innocent men, women, and children so that the 'moderate' Syrian rebels can still hate on Israel! /

11.  Syrian Rebels Killing Each Other

12.  What did the American Middle Class ever do to him?

He has outsourced our foreign policy to a thug...

14.  Putin's State of the Union Address to the United States

Putin had better be careful.  Now that he's a 'journalist,' he might meet the same fate that 19 major reporters in Russia have. /

16.  Omerica: Little Girl Forced To Dump God As Her Idol And Pick Michael Jackson Instead! (TGWP) 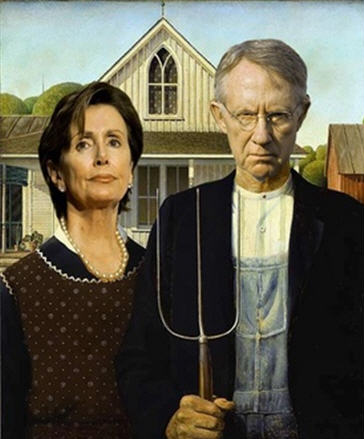 17.   Reid:  'Anarchists' Have Taken Over The House And Senate

On the heels of his 'Assad is Hitler! We MUST do something!  Er, NEVER MIND' Full Godwin-Emily Litella routine, he decides to tempt the fates of The Princess Bride.

These freaks are certifiable.

19.  Leftist Polling Firm Sat On Colorado Recall Results On Eve Of Election Because 'We Just Couldn't Believe Them!'

'We did a poll last weekend in Colorado Senate District 3 and found that voters intended to recall Angela Giron by a 12 point margin, 54/42. In a district that Barack Obama won by almost 20 points I figured there was no way that could be right and made a rare decision not to release the poll.'

Jensen said he worried that ”respondents may not have understood what they were being asked,”

Even they think Democrat voters are stupid.

'For Mayors Against Illegal Guns, if they lose even one of these seats, they might as well fold it up. And they understand that.’

'Full speed ahead. The lesson of yesterday is one we already knew: You can cherry-pick elections, spend a lot of money, and defeat and elect candidates. We will do exactly the same.'


Good luck with that, Dems!

21.   NHS Death Rate Is One Of Worst In The West: Patients 50% More Likely To Die Of Neglect Than In US, Says Study


* Clinical care trails the rest of the Western World, it has emerged


* British patients were found to be almost 50 PERCENT more likely to die from poor care than those in America.

*  Britons have FIVE TIMES the chance of dying from pneumonia than U.S.

*  Death rates for hospitals in England were 22.5% HIGHER than in six  others in the western world including Canada and France.

*  The adjusted death rate in English hospitals is 58 PERCENT higher than the best of the countries.
But, but, but, they have universal healthcare!!!

22. Report: American Jihadi Killed In Somalia By His Fellow Islamists

23.  Administration Doubts That It Can Prove That The Assad Ordered An Attack

Perfect, but let's bomb him anyway! /

Dude, this is your leader's strategery!

'I can’t believe the White House’s strategy on Syria is working out this well. I doubt they can, either.'


Yeah, Bam's got Putin and Assad right where he wants them or something!


OK, who here is surprised?

Yeah, that's what I thought.

30.  Witness to a Syrian Execution: 'I Saw a Scene of Utter Cruelty'


Again, what could POSSIBLY go wrong with arming these fuckers?

33.   Let's Catch Up With Those 'Moderate' Syrian Rebels That Obama, Kerry & McCain Are Still Trumpeting!


He is the one that Obama, Kerry and McCain should be listening to instead of paid hacks like Elizabeth O'Bagy.

* For Axe...since he forgets to check other sites for links.