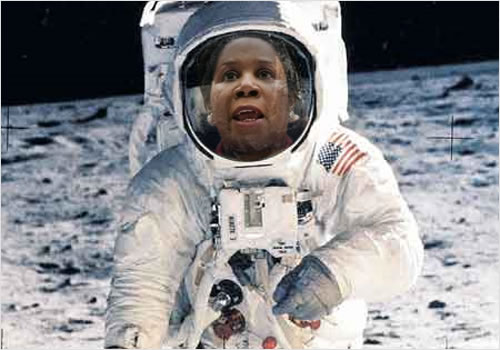 'Did the Mars Rover take any images of the flag Neil Armstrong planted on Mars?'


...which caused her colleague, Vernon Ehlers, to sigh and state:

'We don't teach enough science in this country.'

As frighteningly stupid as people like Tippin' Guam Johnson and Dora da Explora Jackson-Lee are, they are NOTHING compared to the morons and moronettes that not only send them to Congress, but BEG them to make the decisions concerning their healthcare, children, housing, finances, contracts, relationships, transportation, food, drugs, security, etc, FOR THEM!

Applicable to more than just Barack Obama, who is, in all actuality, just a haemorrhoid on the anus that IS Progressivism...

'The danger to America is not Barack Obama but a citizenry capable of entrusting a man like him with the Presidency.  It will be far easier to limit and undo the follies of an Obama presidency than to restore the necessary common sense and good judgment to a depraved electorate willing to have such a man for their president. The problem is much deeper and far more serious than Mr.Obama, who is a mere symptom of what ails America .. Blaming the prince of the fools should not blind anyone to the vast confederacy of fools that made him their prince. The Republic can survive a Barack Obama, who is, after all, merely a fool.  It is less likely to survive a multitude of fools such as those who made him their president.'