CAIR Has A Message For You Ignorant Americans

In the wake of revelations that the Boston Marathon Bombers were engaged in Jihad, or holy war, CAIR held a press conference in Chicago today to remind Americans that this has nothing to do with Islam.

The Council on American Islamic Relations again offered sympathy to victims of the Boston Marathon bombing on Friday, but added a plea for Americans not to generalize and conclude that Muslim teachings influenced the suspect in any way.

Too bad for CAIR, the Boston Bombers disagree.

Pointing to the Jewish leader and pastor by his side at the news conference, he said Muslims have discovered a powerful source of support since the September 11 terrorist attacks.

“Friends of Muslims are emerging as a great force in America,” he said. “American people are fed up with the dumbing down of America.”

You got that America?

'Toons of the Day: The Week In Review 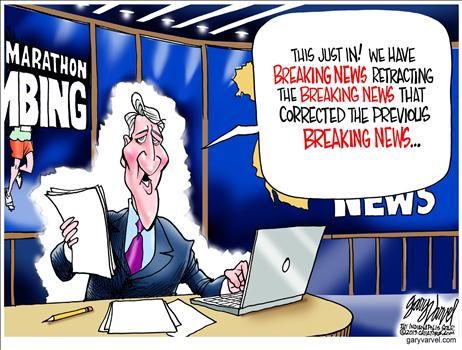 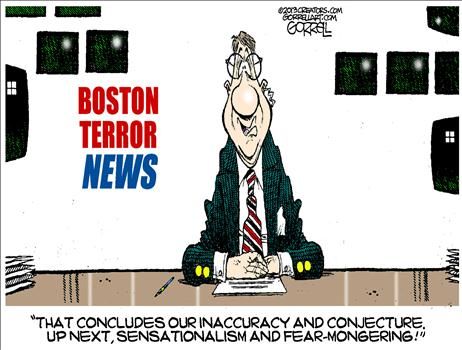 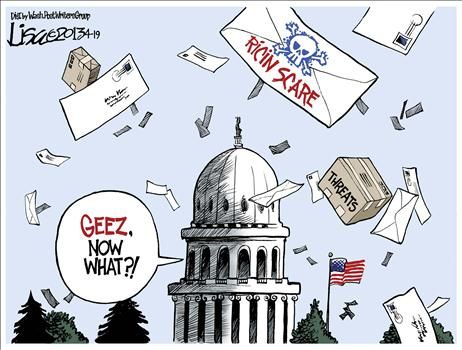 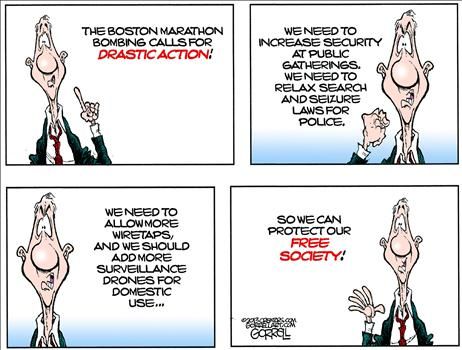 “The welfare of humanity is always the alibi of tyrants.” 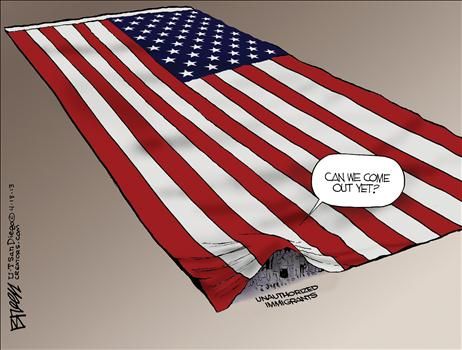 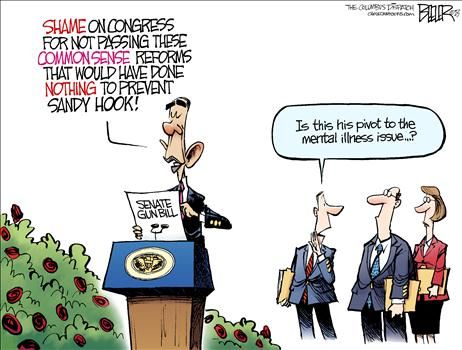 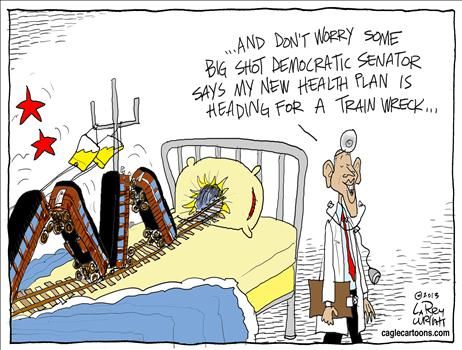 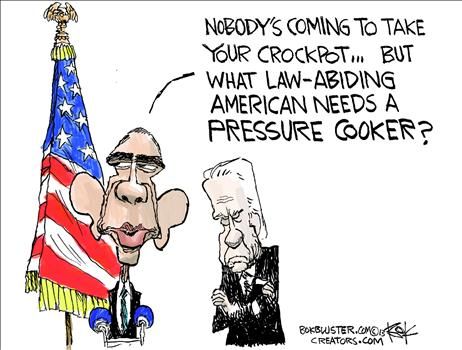 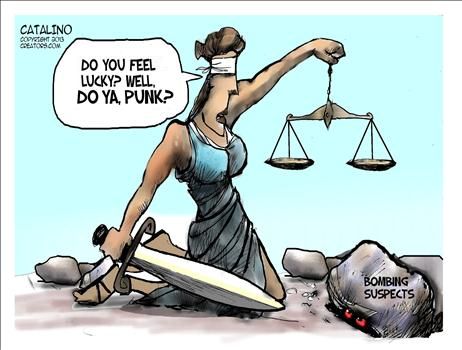 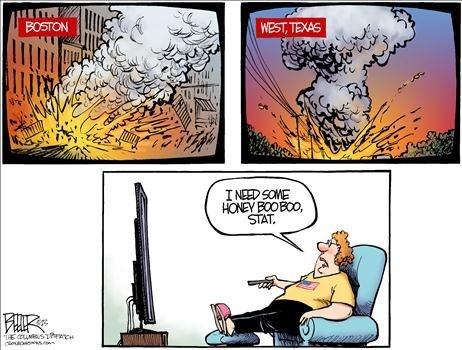 Be sure to see :  'Toons of the Day: Dies Horribilis

Graph of the Day: A Majority of Americans Say Guns Make Home Safer How the anti-Semitic, anti-American, ex-Media Matters fellow celebrates the capture of a Jihadist.


Another example of the kind of violent fantasies that one can expect to start seeing bubbling up as the war against America intensifies:

Here’s why Rosenberg hates “neocons” so much. He fully embraces the progressive dogma that every single death in Iraq is a murder and that “neocons” are responsible for it. In Rosenberg’s eyes, anyone who so much as wrote in favor of the Iraq War is morally equal to any terrorist who may only be responsible for a handful of murders:

First Photos of Dzhokhar A Tsarnaev In Custody http://tinyurl.com/czzcxh2
Posted by Sophie Ro, PHUP at 20.4.13 No comments: Links to this post

I'd like to teach the world to sing
In perfect harmony

This must disappoint David Sirota.

This has been a strange and deadly week in America. On Monday, two bombs exploded at the Boston Marathon, the first successful terrorist attack on a civilian target on American soil since 9/11. And yet a mere two days later, Boston’s death toll was surpassed by a freak fertilizer accident at a small town in Texas.

In America, all atrocities are not equal: Minutes after the Senate declined to support so-called gun control in the wake of the Newtown massacre, the president rushed ill-advisedly on air to give a whiny, petulant performance predicated on the proposition that one man’s mass infanticide should call into question the constitutional right to bear arms. Simultaneously, the media remain terrified that another man’s mass infanticide might lead you gullible rubes to question the constitutional right to abortion, so the ongoing Kermit Gosnell trial in Philadelphia has barely made the papers — even though it involves large numbers of fully delivered babies who were decapitated and had their feet chopped off and kept in pickling jars. Which would normally be enough to guarantee a perpetrator front-page coverage for weeks on end. In the most recent testimony, one of the “clinic”’s “nurses” testified that she saw a baby delivered into the toilet, where his little arms and feet flapped around as if trying to swim to safety. Then another “women’s health worker” reached in and, in the procedure’s preferred euphemism, “snipped” the baby’s neck — i.e., severed his spinal column. “Doctor” Gosnell seems likely to prove America’s all-time champion mass murderer. But his victims are ideologically problematic for the media, and so the poor blood-soaked monster will never get his moment in the spotlight.

The politicization of mass murder found its perfect expression in one of those near-parodic pieces to which the more tortured self-loathing dweebs of the fin de civilisation West are prone. As the headline in Salon put it, “Let’s Hope the Boston Marathon Bomber Is a White American.” David Sirota is himself a white American, but he finds it less discomforting to his Princess Fluffy Bunny worldview to see his compatriots as knuckle-dragging nutjobs rather than confront all the apparent real-world contradictions of the diversity quilt. He had a lot of support for his general predisposition. “The thinking, as we have been reporting, is that this is a domestic extremist attack,” declared Dina Temple-Raston, NPR’s “counterterrorism correspondent.” “Officials are leaning that way largely because of the timing of the attack. April is a big month for anti-government and right-wing individuals. There’s the Columbine anniversary, there’s Hitler’s birthday, there’s the Oklahoma City bombing, the assault on the Branch Davidian compound in Waco.” Miss Temple-Raston was born in my mother’s homeland of Belgium, where, alas, there were more than a few fellows willing to wish the Führer happy birthday back when he was still around to thank you for it. But it was news to me it was such a red-letter day in the Bay State. Who knew? At NPR, “counterterrorism” seems to mean countering any suggestion that this might be terrorism from you know, the usual suspects.

David Sirota’s column appeared on Tuesday. By Wednesday he got his wish, not re the Boston perp but with the Ricin guy, a man who (in further echoes of those first days after 9/11) mailed poison-laced letters to a Republican senator and the Democrat president. The would-be Ricin terrorist turned out to be not a jihadist from Yemen or Waziristan but an Elvis impersonator from Mississippi whom Senator Wicker had once booked as entertainment for a friend’s party. Kevin Curtis is not just your run-of-the-mill Elvis impersonator, but a seven-time finalist in the prestigious “Images of the King” competition. Yet he is, in fact, the second Elvis impersonator to be mixed up with Ricin, following the arrest last year of Michael Conley in a Florida motel room after a showdown with cops in which he brandished a vial of white powder at them.


Despite this pattern of behavior, Mr. Sirota is probably right. There will be no profiling of Elvis impersonators by Homeland Security. No one will stare suspiciously if someone is seen walking around the perimeter of sensitive facilities in a rhinestone-studded white jumpsuit with flyaway collars. The president is unlikely to drone Vegas. Elvis impersonators can post all the threats they want (“If you’re looking for trouble, you’ve come to the right place  If you’re looking for trouble, look right in my face”) and the Islamophobic security state will still pursue its peculiar obsessions.

Twenty-four hours later, Mr. Sirota had a second feather in his cap. The two suspects in the Boston bombing turned out to be Caucasian males — that’s to say, males from the Caucasus, specifically the North Caucasus, Chechnya by way of Dagestan. Unfortunately for his delicate sensitivities, the two Caucasians were also Muslims. They were alumni of Cambridge Rindge and Latin, one of the oldest public schools in America and latterly one of the most “diverse,” boasting (being the operative word) students from over 80 countries. The Tsarnaev brothers had spent most of their lives in the United States, and lived the diversity dream. They seem to have had a droll wit when it comes to symbolism: Last year, the younger brother took his oath of citizenship and became an American on September 11. And, in their final hours of freedom, they added a cruel bit of mockery to their crimes by carjacking a getaway vehicle with a “Co-exist” bumper sticker. Oh, you must have seen them: I bet David Sirota has one. The “C” is the Islamic crescent, the “O” is the hippy peace sign; the “X” is the Star of David, the “T” is the Christian cross; I think there’s some LGBT, Taoist, and Wiccan stuff in there, too. They’re not mandatory on vehicles in Massachusetts; it just seems that way.

I wonder, when the “Co-exist” car is returned to its owner, whether he or she will keep the bumper sticker in place. One would not expect him to conclude, as the gays of Amsterdam and the Jews of Toulouse and the Christians of Egypt have bleakly done, that if it weren’t for that Islamic crescent you wouldn’t need a bumper sticker at all. But he may perhaps have learned that life is all a bit more complicated than the smiley-face banalities of the multicultists.


It’s very weird to live in a society where mass death is important insofar as it serves the political needs of the dominant ideology. A white male loner killing white kindergartners in Connecticut is news; a black doctor butchering black babies in Pennsylvania is not. When the manhunt in Boston began, I received a bunch of e-mails sneering I was gagging for it to be the Muzzies just as hungrily as lefties were for it to be an NRA guy, a Tea Partier, a Sarah Palin donor. But, actually, I wasn’t. On Monday, it didn’t feel Islamic: a small death toll at a popular event but not one with the resonance and iconic quality the big-time jihadists like — like 9/11, the embassy bombings, the U.S.S. Cole. After all, if the jihad crowd wanted to blow up a few people here and there IRA-style they could have been doing it all this last decade.

On the other hand, it didn’t feel like one of those freelance bumblers — the Pantybomber, the Times Square Bomber — finally got lucky. It feels like something in between, something new. Is it just a one-off? Or a strategic evolution?

Either way, the fatuities of the “Co-exist” bumper sticker are not real. The disaffected young Muslim on the lam in a car with a “Co-exist” sticker is.