The State of Our Union Is Broke

Obama Calls For More Of The Unaffordable Same.

Had I been asked to deliver the State of the Union address, it would not have delayed your dinner plans:

“The State of our Union is broke, heading for bankrupt, and total collapse shortly thereafter. Thank you and goodnight! You’ve been a terrific crowd!”

I gather that Americans prefer something a little more upbeat, so one would not begrudge a speechwriter fluffing it up by holding out at least the possibility of some change of fortune, however remote. Instead, President Obama assured us at great length that nothing is going to change, not now, not never. Indeed the Union’s state — its unprecedented world-record brokeness — was not even mentioned. If, as I was, you happened to be stuck at Gate 27 at one of the many U.S. airports laboring under the misapprehension that pumping CNN at you all evening long somehow adds to the gaiety of flight delays, you would have watched an address that gave no indication its speaker was even aware that the parlous state of our finances is an existential threat not only to the nation but to global stability. The message was, oh, sure, unemployment’s still a little higher than it should be, and student loans are kind of expensive, and the housing market’s pretty flat, but it’s nothing that a little government “investment” in green jobs and rural broadband and retraining programs can’t fix. In other words, more of the unaffordable same. 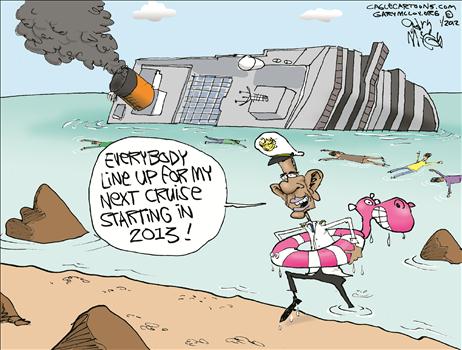 The president certainly had facts and figures at his disposal. He boasted that his regulatory reforms “will save business and citizens more than $10 billion over the next five years.” Wow. Ten billion smackeroos! That’s some savings — and in a mere half a decade! Why, it’s equivalent to what the government of the United States borrows every 53 hours. So by midnight on Thursday Obama had already re-borrowed all those hard-fought savings from 2017. “In the last 22 months,” said the president, “businesses have created more than three million jobs.” Impressive. But 125,000 new foreign workers arrive every month (officially). So we would have to have created 2,750,000 jobs in that period just to stand still.

Fortunately, most of the items in Obama’s interminable speech will never happen, any more than the federally funded bicycling helmets or whatever fancies found their way onto Bill Clinton’s extravagant shopping lists in the Nineties. At the time, the excuse for Clinton’s mountain of legislative molehills was that all the great battles had been won, and, in the absence of a menacing Russian bear, what else did a president have to focus on except criminalizing toilet tanks over 1.6 gallons. President Obama does not enjoy the same dispensation, and any historians stumbling upon a surviving DVD while sifting through the ruins of our civilization will marvel at how his accumulation of delusional trivialities was apparently taken seriously by the assembled political class.

An honest leader would feel he owed it to the citizenry to impress upon them one central truth — that we can’t have any new programs because we’ve spent all the money. It’s gone. The cupboard is bare. What’s Obama’s plan to restock it? “Right now, Warren Buffett pays a lower tax rate than his secretary,” the president told us. “Asking a billionaire to pay at least as much as his secretary in taxes? Most Americans would call that common sense.”

But why stop there? Americans need affordable health care and affordable master’s degrees in Climate Change and Social Justice Studies, so why not take everything that Warren Buffett’s got? After all, if you confiscated the total wealth of the Forbes 400 richest Americans it would come to $1.5 trillion.

Which is just a wee bit less than the federal shortfall in just one year of Obama-sized budgets. 2011 deficit: $1.56 trillion. But maybe for 2012 a whole new Forbes 400 of Saudi princes and Russian oligarchs will emigrate to the Hamptons and Malibu and keep the whole class-warfare thing going for a couple more years.

The so-called “Buffett Rule” is indicative not so much of “common sense” as of the ever widening gap between the Brobdingnagian problem and the Lilliputian solutions proposed by our leaders. Obama can sacrifice the virgin daughters of every American millionaire on the altar of government spending and the debt gods will barely notice so much as to give a perfunctory belch of acknowledgement. The president’s first term has added $5 trillion to the debt — a degree of catastrophe unique to us. In an Obama budget, the entire cost of the Greek government would barely rate a line-item. Debt-to-GDP and other comparative measures are less relevant than the hard-dollar numbers: It’s not just that American government has outspent America’s ability to fund it, but that it’s outspending the planet’s.

Who gets this? Not enough of us — which is exactly how Obama likes it. His only “big idea” — that it should be illegal (by national fiat) to drop out of school before your 18th birthday — betrays his core belief: that more is better, as long as it’s government-mandated, government-regulated, government-staffed — and funded by you, or Warren Buffett, or the Chinese Politburo, or whoever’s left out there.

What of his likely rivals this November? Those of us who have lived in once-great decaying polities recognize the types. Jim Callaghan, prime minister at 10 Downing Street in the Seventies, told a friend of mine that he saw his job as managing Britain’s decline as gracefully as possible. The United Kingdom certainly declined on his watch, though not terribly gracefully. In last Monday’s debate, Newt Gingrich revived the line and accused by implication Mitt Romney of having no higher ambition than to “manage the decline.”

Running on platitudinous generalities, Mitt certainly betrays little sense that he grasps the scale of the crisis. After a fiery assault by Rick Santorum on Romney’s support for an individual mandate in health care, Mitt sneered back at Rick that “it wasn’t worth getting angry over.” Which may be a foretaste of the energy he would bring to any attempted course correction in Washington.


Newt, meanwhile, has committed himself to a lunar colony by the end of his second term, and, while pandering to an audience on Florida’s “Space Coast,” added that, as soon as there were 13,000 American settlers on the moon, they could apply for statehood. Ah, the old frontier spirit: I hear Laura Ingalls Wilder is already working on Little House in the Crater.
Maybe Newt’s on to something. Except for the statehood part. One day, when America gets the old foreclosure notice in the mail, wouldn’t it be nice to close up the entire joint, put the keys in an envelope, slide it under the door of the First National Bank of Shanghai, and jet off on Newt’s Starship Government-Sponsored Enterprise?

There are times for dreaming big dreams, and there are times to wake up. This country will not be going to the moon, any more than the British or French do. Because, in decline, the horizons shrivel. The only thing that’s going to be on the moon is the debt ceiling. Before we can make any more giant leaps for mankind, we have to make one small, dull, prosaic, earthbound step here at home — and stop. Stop the massive expansion of micro-regulatory government, and then reverse it. Obama has vowed to press on. If Romney and Gingrich can’t get serious about it, he’ll get his way.

— Mark Steyn, a National Review columnist, is the author of After America: Get Ready for Armageddon. © 2012 Mark Steyn