Criminals & #Socialists To The Left Of Me; #TrumpsterDivers To The Right...Here, I Am Stuck In The Middle Of Mendacity And Mediocrity With You 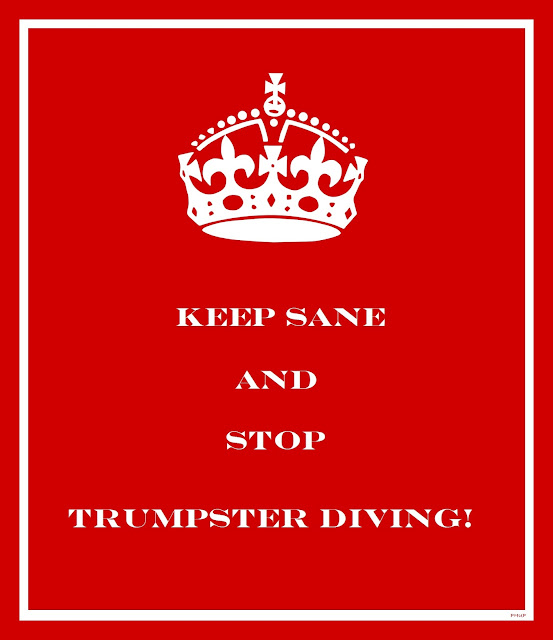 So, according to Donald Trump, 'Ted Cruz was an 'anchor baby' in Canada and may not even be a U.S. citizen.' (h/t HotAir.com)

Fuck Trump and his inflammatory, ignorant, and demagogic rhetoric.  Cruz has been an American, natural-born citizen since he took his first breath. Now, Trump is not only claiming that Cruz isn't a natural born citizen, but may not be a citizen at all.

This is fucking bullshit:

There are several problems here. First, the Supreme Court did take up a very closely related set of questions in a 1971 case. (That would be the year after Cruz was born.) In that case -- Rogers v Bellei -- involved a man born in Italy to an Italian father and a U.S. citizen mother and deemed a natural-born U.S. citizen.

The man obtained a passport as a child, traveled to the United States many times and even registered with Selective Service when required (making himself available in the event of a U.S. military draft). But the man never met a requirement that those with dual citizenship live inside the United States for at least five years by the age of 28.

American officials warned Aldo Bellei about this requirement several times, including the last time he renewed his U.S. passport. He didn't meet it. His citizenship was revoked. He sued the then Nixon administration's secretary of state, William P. Rogers. A lower court ruled in Bellei's favor. The U.S. Supreme Court ruled against him. Bellei's days as a U.S. citizen were no more.

Now, the Cruz campaign made the case to The Fix that Rogers v Bellei defined the term "natural-born citizen." To this, we have to say, not quite. But it's pretty easy to see that, at least by the standard identified by the Supreme Court in Rogers v Bellei, Cruz has been a natural-born citizen since birth and has more than met the requirements to sustain that in ways that Bellei did not.

Cruz, after all, got his schooling in the United States, was the valedictorian of his high school class, is a well-known former member of Harvard University Law School's debate team, and has the transcripts to prove that he did quite well in classes at Princeton University and Harvard, too. He worked for the Supreme Court in his 20s and argued several cases in his 30s. Finally, the Cruz campaign says that Cruz did not renounce his dual Canadian citizenship simply because he wanted to run for president. They say he decided that American citizenship -- natural-born citizenship, which he has had from his first breath in Canada -- was the only one he wanted.

We have no clue at all how someone could determine the truth of Cruz's feelings about his Canadian citizenship. But to disprove all the rest of that stuff establishing his presence in and ties to the United States, his mother's citizenship and so forth, that would require somebody to make some very Obama-birther-type claims. Somehow, the documentary evidence of the last 40-plus years of Cruz's life would have to have been falsified. We are talking about everything from transcripts and stories in local newspapers to Supreme Court records here.

Are you sensing the implausibility? Does it sound at all familiar?


He has met every Federal statutory requirement and the requirements laid out in Rogers v Bellei.

Not only is he a natural-born citizen, he is an American citizen...and has been since birth. Period.

Frankly, I understand how many feel about this ASSINE argument, especially since I have been the target of many of the Trumpster Divers.  There are two types of American citizenship: Natural-born and Naturalised.

Seemingly, a number of Trump supporters don’t believe that I am an American citizen because I am not natural born.


Anwar al-Awlaki was born in New Mexico. He was a natural-born American. But, he was a ‘Merican fer REELZ!’. Meanwhile, I am not a real American because I CHOSE to ask for the privilege of becoming a citizen of a country that I sincerely love. I’m noticing a pattern here, as well.

You are not a natural born citizen. I’m sorry you have inadequacy issues about it.

I have never claimed to be one. It doesn’t, however, make me any less of an American…except, apparently, in your eyes.

Yes, I cannot become POTUS – a job I have never wanted. Furthermore, I am on record numerous times saying that the Constitution should NOT be changed to allow naturalised Americans to run for the Presidency.

I have no ‘issues’ about the matter whatsoever. Evidently, you do.

Wow. You’re getting incredibly dishonest truncating your posts and keeping mine. You have been going on a 24 hour rant on this because of some slight I gave you.

'Yes, I am an American BY CHOICE. I expended a lot of time, energy, effort and money to become an American.

But, I guess that since I am only a naturalised American, I don’t really count. You have those natural-born Americans like Jane Fonda, Michael Moore, Rosie O’Donnell, Quentin Tarantino, Occupy, BLM, RevCom, etc. They might not have chosen to be Americans. They might hate their country. They might hate their history, the Constitution, the Founders, the Framers, veterans, Christians, Southerners, white people, conservatives, libertarians, Israel, etc, but, by golly, they are REAL Americans, amirite?


Baloney! The Federal government and SCOTUS say otherwise on the issue of citizenship, not natural born citizen as it would pertain to people like me, myself included.

Yes, sure, of course, I am prohibited from becoming the President of the United States - a position that I couldn’t see myself accepting even if I were, somehow, elected through write-in ballots or selected. Additionally, not once have I asked for the Constitution to be amended on this subject.

The very reason that the Framers wanted only natural-born citizens to be eligible to run for the highest office in the land was to prevent a naturalised citizen with nefarious motives becoming President.

Yes, Trump will probably win the nomination and could very well become the next President, but, as Teddy Roosevelt said, 'Well, bully for you!’

So, many Trump supporters howl, claim that I am not a ‘REAL American’ because I wasn’t born on American soil…as though I have ever claimed to be a natural born citizen.

Anyone willing to loan me a hankie?

The idea that I am not a 'natural-born American' has unleashed a torrent of tears.  In fact, this devastating development - unknown to now (sarc) - might achieve what Al Gore and the Cult of Climate Change could not.

My tsunami of tears may finally flood the West Side Highway permanently!1!!11!!!111

Anwar al-Awlaki was born in Las Cruces, New Mexico in 1971.  He WAS a ‘REAL American’ because he was a natural born citizen.  Yes, of course, he is dead, but whenever has that stopped a Democrat (or deceased Republican-cum-Democrat) from voting. After casting his 5 or 6 votes in Chicago, along with Hugo Chavez, William F Buckley, Speedy Gonzalez, Mickey Mouse, Donald Duck, the dead families of Michelle Obama and the Daleys, they will – as if by magic – appear on the voting rolls of other states and cast votes there, too.

Sooooooo, my recent position of  TRUMP. OR. CRUZ. ANY. DAY. OF. THE. WEEK. OVER. CRIMINAL. CLINTON. OR. SOCIALIST. SANDERS. has 'evolved.'

Several Trumpsters have made it abundantly clear that I am not ‘really’ like them and who needs my vote anyway?  I am merely a naturalised American, who CHOSE to apply for the privilege of being a citizen of the greatest country on earth.  I’m nobody and I am certainly below in rank behind the most noble and freedom-loving, natural born citizens like Nidal Hasan, Syed Rizwan Farook, Timothy McVeigh, Dylan Roof, and a good percentage of the South Side.

Obviously, the ‘POSSIBLE’ 20% of African-Americans voting for Trump will trump the 5 MILLION new Latino voters.(Unlikely, but I’ll play along).

Since you have it all covered, you don’t need my vote even though, I have said that I would vote for him if he were nominated.

Here’s the thing: They believe that they have sewn up the deal and he will win in a landmark landslide. After all, only yesterday, one Trumpster said that he would win FORTY STATES!!11!!!111

Anyhoo, I have amended my position on the election. My vote is unnecessary (and for some, not wanted).

Americans know what they want and, given the right circumstances, they should get it...GOOD AND HARD.

Neither citizenship nor the Constitution is a suicide pact.  Some want to use the Marshall Applewhite option; others desire the Progressive Way; Establishment types just want the Jonestown Kool-Aid never to be depleted so as to insure every American gets their 'fair share'; still other, Trumpster Divers, go their own way.

I started out supporting the guy's run. Defended him against Megyn Kelly, #WarOnWomen, immigration, etc.  But, Donald the Demagogue has jumped the last birther shark and his little bots are doing their best to destroy good people.  Where were these same people when Matt Bevin got trounced by Mitch McConnell?  Why is more anger directed at those who will not fall in love and in line with Trump or his supporters than Hillary Clinton or Barack Obama?

I have never seen the vitriol hurled at old friends.  I certainly never believed that (now exposed nativists, xenophobes and bigots) would decide that I'm not in the 'Real American' group.  Go right ahead!  If you have engaged in this because of DONALD. BLOODY. TRUMP., that says everything about you and absolutely nothing about me and every other naturalised American.

Thus, my new preferred plan is the 2004 Option. No Bush. No Kerry. Just a visit to Grams in Kent. This year, a little sun, frozen drinks, the beach, and normalcy (at least for me).

Who the fuck cares?


Or, it might just be as simple as 'I cannot. I have to wash my hair.'

PS: If you want to smugly cry 'Butthurt!', by all means, do it in style.  Your opinion is meaningless. What does mean something is your ignorance on the law, your slavish adoration to ANY other human being who tells you what you want to hear, and your ugliness, which will only be used to besmirch the motives of everyone else.

PPS: Cross-posted with some of the more 'delightful thoughts' of some supporters of the 'Hair Today; Transplanted Tomorrow' Trump, who are now dreaming Peggy Joseph-style about how Dear Leader will 'Make America Great Again!'