Predictable History:
"History will be kind to me for I intend to write it.”


Since the Left usually writes most of history...Tails:  Walter Duranty wins; Heads:  Millions of Ukrainians lose...for a long while anyway.
(No, of course, Churchill wasn't a leftist.  You'll see my point in a sec...) 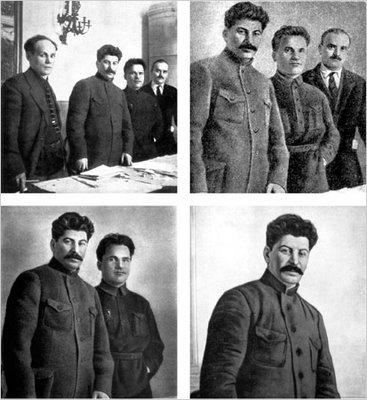 Stalin used to "disappear" his enemies and simply airbrushed them out of photographs and history.  Has anyone see Nakoula Basseley Nakoula or the Benghazi survivors lately?

"We live in a country with an unpredictable past.”

"I've always been in favour of the Patriot Act, indefinite detention, assassination of American citizens, the individual mandate, meddling in the affairs of other countries and did I mention that we've always been at war with Eurasia?" - President Barack Obama

"What we remember is not what actually happened, not history, but those hackneyed impressions they tried to hammer into our memories by constant repetition.”