Pic of the Day: Your Tax Dollars At Work In San Francisco. Yes, Dicks Are Involved. 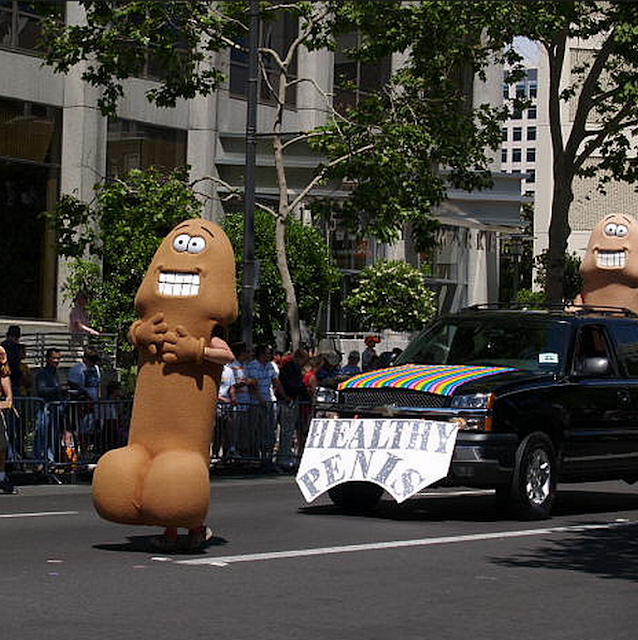 San Francisco may have banned the exposure of genitalia, but that’s not stopping the Department of Public Health from bringing back its giant Healthy Penis. Yes, the beloved six-foot-tall mascot for safe sex is literally coming out of the closet and will be back at parades and other city events – and this time he comes with free penis-shaped stress toys!

Continue reading... The Healthy Penis Comes Out Of Retirement

Boston Victim Who Lost Both Legs Reunited With The Cowboy Hat Hero Who Saved His Life: 'I Gave Him A Kiss On The Cheek As It Was Beautiful To See Him Doing So Well' 'When Carlos picked me up and threw me into the wheelchair, then I was like, maybe I am gonna make it'

The first time Jeff Bauman Jr met Carlos Arredondo it was moments after one of two blasts at the Boston Marathon blew him to the ground taking both his legs.

Without hesitation Arredondo rushed to the 27-year-old's side, pinching a severed artery closed in his thigh as seen in a dramatic photograph perhaps best capturing the day's heroism, suffering and humanity.

Their second meeting at Boston Medical Center on Monday, exactly one week later, was far more private yet still nearly just as emotional as Buaman came face-to-face with the man he credits for saving his life. Improving: Hero Carlos Arredondo, wearing a similar cowboy hat, opened up about their second meeting on Monday at the Boston Medical Center and how much better his new friend is doing

'When we first saw each other we hugged each other and I gave him a kiss on the cheek because it was very beautiful to see him doing very well,' Arredondo shared to WHDH after meeting behind closed doors.

'He was so happy to see me and he was so thankful. Tears were coming out of his eyes,' he said.

Because of the amount of pain Bauman has been in, their reunion waited until Monday allowing him some extra time toward his recovery.

Arrendondo wore a similar tan cowboy hat on his head, one he may be forever be remembered by after that now iconic photograph capturing the day's horrific events.

'"You saved my life,"' Arredondo repeated Bauman's words to him which he described as 'very strong' to hear.

'I'm glad that I got to help him,' he added while saying that Bauman will go on to do great things for others. 'When Carlos picked me up and threw me into the wheelchair, then I was like, maybe I am gonna make it,' Bauman previously told WEEI of that desperate moment. 'Before that, no way. I thought I was done.'

As Arredondo earlier revealed, pain and suffering are nothing new to the Costa Rican immigrant.

The father was dealt another devastating blow, when his second son Brian, 24, committed suicide just before Christmas 2011 as the final troops withdrew from the war which killed his brother.

Brian had suffered with depression and battled drug addiction ever since Alexander's death.

He has severed as an inspirational anti-war protester ever since.

Arredondo has described how, as most people ran for their lives when the explosions went off in Boston, he vaulted a fence to get to spectators, many of whom had lost limbs, and used his clothes and towels to stanch victims' bleeding. Hero: A badly shaken Carlos Arredondo, who was at the finish line of the 117th Boston Marathon when two explosives detonated

'I jumped the fence after the first explosions and all I saw was a puddle of blood and people with lost limbs,' he told ABC News. 'I saw adults, much younger than myself -- ladies, men, pretty much everyone was knocked out.'

Mr Arredondo helped Mr Bauman into a wheelchair that race medical staff had brought and said he kept talking to the man so he wouldn't lose consciousness.

'I kept talking to him. I kept saying, "Stay with me, stay with me,"' Mr Arredondo, who is a member of the Red Cross disaster team, told Maine Today.

A graphic photograph shows the hero seemingly pinching shut the femoral artery on one of Mr Bauman's part-severed legs using his hand as they rush him to ambulances.

The day he learned his elder son had been killed, which also happened to be his 44th birthday, Mr Arredondo ​locked himself in a van with five gallons of gasoline and a propane torch and set the van on fire.