The topic? As usual, Jews and Israel. And it wasn’t pretty:

Jewish man wearing a yarmulke: I work 65 hours a week.

Protester: You probably live in the Hamptons ‘n’ some shit.

Protester: I don’t work. How about them apples?

Jewish man: So why don’t you get a job?

Jewish man: Why not?

Jewish man: How do you get the materials?

Jewish man: What are the points?

More disturbing to me than the anti-Semitic conspiracy theories is the complete ignorance of how economics works.

In addition to the “Jews own everything” meme, the blogger/photographer, Urban Infidel, sadly also uncovered more of the ignorant “Israel is evil” meme, according to Zombie, with one protester praising Palestinian suicide bombers as having the kind of dedication and “righteousness” that the Israelis lack:

Anti-Israel protester: You think we about lies? You think I came out here on my day off to just hear some lies? I came out here to bear witness to the truth. You can’t be talking lies in front of the people. C’mon, man. Talking about ‘Israel is about peace.’ It ain’t about peace. They’re about destroying people. If they had ovens, they’d put the Palestinians in ovens. And you know it.

Anti-Israel protester #2: That’s why the Jews come into existence.

Pro-Israel protester: Ain’t nothing about peace when you come to Israel. Israel is totally about war and destruction. And you know it. …

Arabic-speaking man: Can she ask you a question? She’s a journalist from the Middle East, and we cover these stories here.

Arabic-speaking man: [Translating her question] Has there [been] anyone that has responded to what you’re calling for?

…and then his interview with the Middle Eastern journalists continues. As Urban Infidel recounts,

All the spewing about Israel caught the attention of an Arab media camera crew, don’t know which one. They, along with their translator took great interest in interviewing this angry man. So one could reasonably assume that this will be broadcast all over the Islamic world.


And Ringo down in Los Angeles snapped photos of some disturbing signs at a recent Occupy LA march:

This picture looks innocent enough — until you zoom in on the ties of Lieberman and Obama:

And a little girl was holding up a classic “American flag with Stars of David” sign, a design I’ve seen several times at earlier anti-Israel rallies. The not-so-subtle message is “The Jews control America.”

See these photos (and so much more) in context in Ringo’s truly eye-popping report:


The Occupation of Los Angeles – Part 6 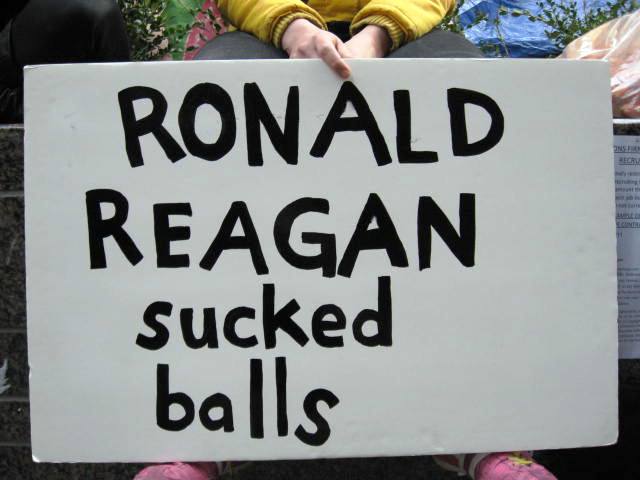 So much has been said about this movement, it has no discernible point, it smells, it's violent, it has rapes, arson, assault, vandalism, theft and psychotics running the place along with a growing rap sheet, so I wasn't sure what else I could find. Since the encampments have become more and more dangerous, I wasn't sure I wanted to risk it, but I went anyway.

I went back to Zucotti Square yesterday because David Crosby and Graham Nash were going to perform and since I had the afternoon free I figured I'd head down to check out the absurd scenery. I missed the show but found something else: the Left's total hatred of Israel and probably Jews. Now, it's never been a secret but to see it openly and unchecked on full display was disturbing. 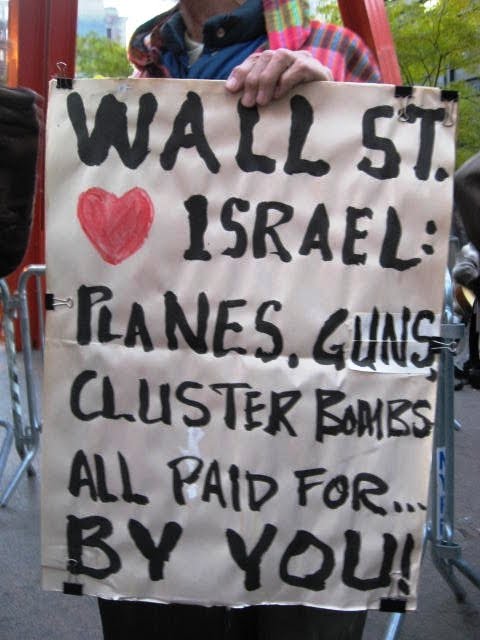 What struck me immediately was the bivouac-style tents and the permanence of the place. Here below is some video footage of the tents and a couple of OWS'ers defacing an American flag. 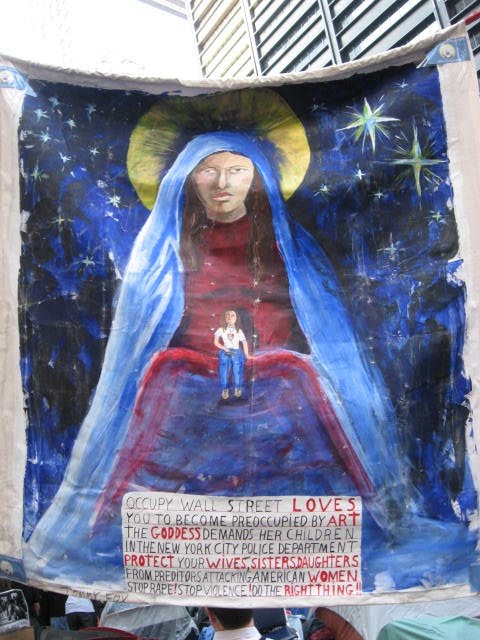 Hanging high and in the middle of it all, underscoring the risk of sexual assault in the occupied tent city is a large, painted canvas depicting the Virgin Mary as a protector of women and girls [and men!] from being raped. 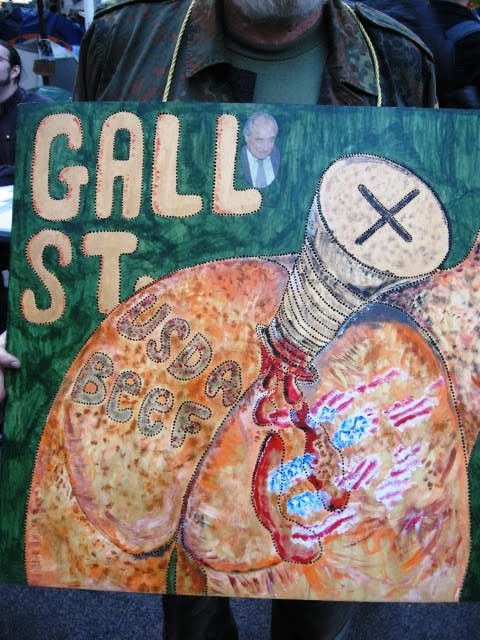 What can I possibly say about this, except for the draftsman's acute attention to anatomy and detail? A great place to bring your kids! 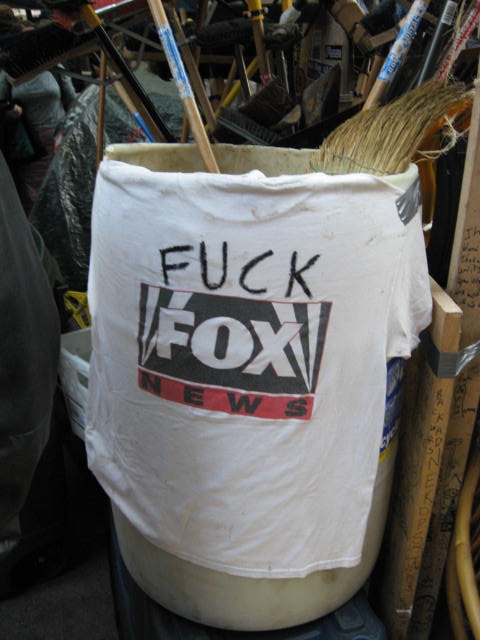 In addition to the perversion and profanity I came across the following scenes and here's where it gets even uglier.
The takeaway? Jews are not loved at OWS. 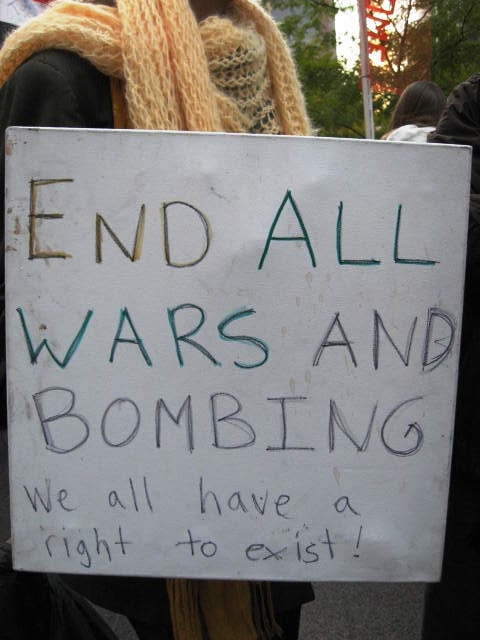 The two gentlemen holding these two signs, above and below, were having a calm discussion about Israel and the Middle East. The guy with the 'end all wars and bombing' sign was pretty laid back and open to listening as the other recounted basic history of the founding of Israel. I have to admit, I was surprised to see an Israel supporter there so I hung out for a while to hear what he had to say. 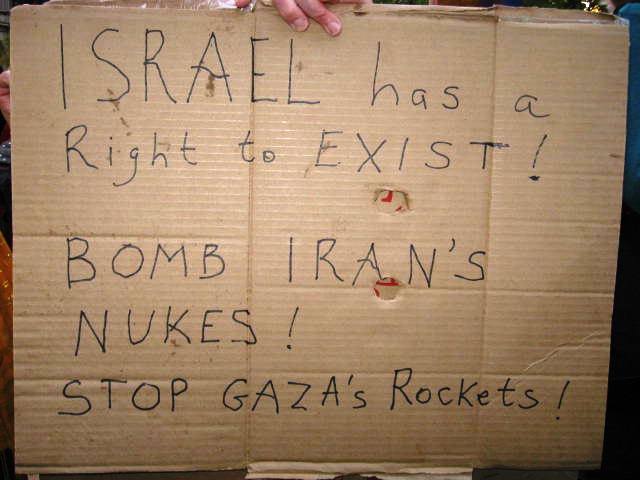 At one point an older African American guy dressed up in elaborate beads, woven tribal garb and head dress came by and looked at the sign about rockets and Gaza. He asked the man holding it if he really believed what he had written. He that Israel is racist and they are just 'Europeans' who should 'go back to where they came from.' There was a lot of agreement from the small crowd.
As all this was happening I was aware of the rather large black guy immediately to my left. I wasn't paying too much attention to him but I did notice that he was paying very close attention to the conversation. Normally, I don't get involved or talk to the OWSers but when I said that Israel wants peace, the man next to me erupted out of his silence.

He ranted loudly for at least a full 3 minutes before I had the nerve to take out my camera. I made sure to glance over at the line of cops along the barricades because there was no telling what would happen. There were several very tense moments as I wondered if he would start throwing his fists.

All the spewing about Israel caught the attention of an Arab media camera crew, don't know which one. They, along with their translator took great interest in interviewing this angry man. So one could reasonably assume that this will be broadcast all over the Islamic world. 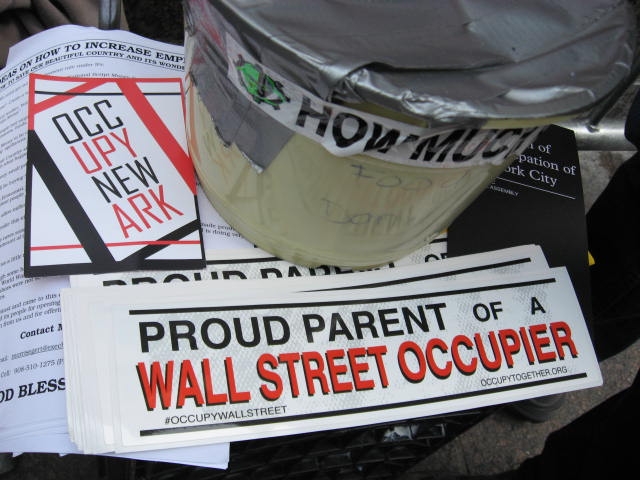 Or, you can click here for the gallery view.

Back
To Be Continued.  Please Keep Checking Back In For Updates.


Emails Expose the True Nature of the #Occupy Movement