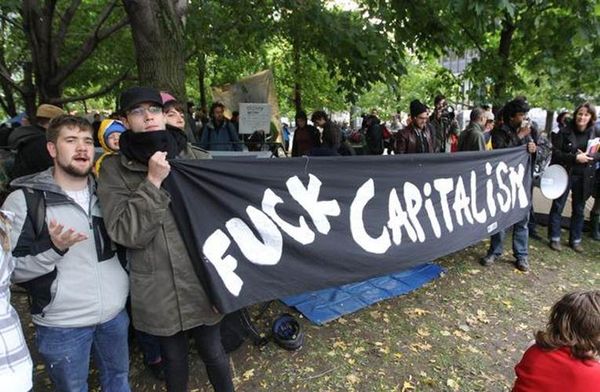 On Saturday, we first had the American Nazi Party come out and join the Obama-endorsed Occupy Wall Street movement and, in a 21st century version of the Molotov-Ribbentrop Pact, the Communist Party USA has also joined the movement.
It is an exciting time in the world!  Our Dear Leader, Barack Hussein Obama, has achieved a feat unaccomplished in decades .... brought Nazis and Communists together in a show of solidarity and sense of purpose .... to destroy capitalism, especially the kind practised by those "nasty Jooooooos" that Reverend Wright hates so much. This is an exciting time! Thousands of mainly young people have been occupying Wall Street for three weeks already, and the “Occupy Movement” has spread to more than 200 other cities. On Oct. 6 the actions spread to our nation’s capital.

The Communist Party USA (CPUSA) will hold a national teleconference to discuss it:

This movement, also known as the “99% movement,” is being hailed across the country.

Movements and organizations are reaching out in solidarity. The AFL-CIO is opening union halls and offering other material assistance. Ordinary people are donating food, money and materials.

In many areas, the “Occupy Movement” is linking up with the National American Wants to Work Week of Actions, Oct. 10-16.

No doubt the “Arab Spring” demonstrations and those that exploded in Wisconsin, Ohio and elsewhere have inspired it. But underlying it all is the economic crisis, the massive unemployment and growing realization that nothing is getting better, and in fact we may be slipping into a “double dip” crisis. The crushing student debt and the feeling of being locked out of society with no future compound this.

The movement is the newest wrinkle in the all-people’s upsurge against the banks and corporations and reflects a new level of class-consciousness.

Jazz Hands For Dummies (A MUST SEE)