Called It: 'God LOVES Fags! He HATES You!' 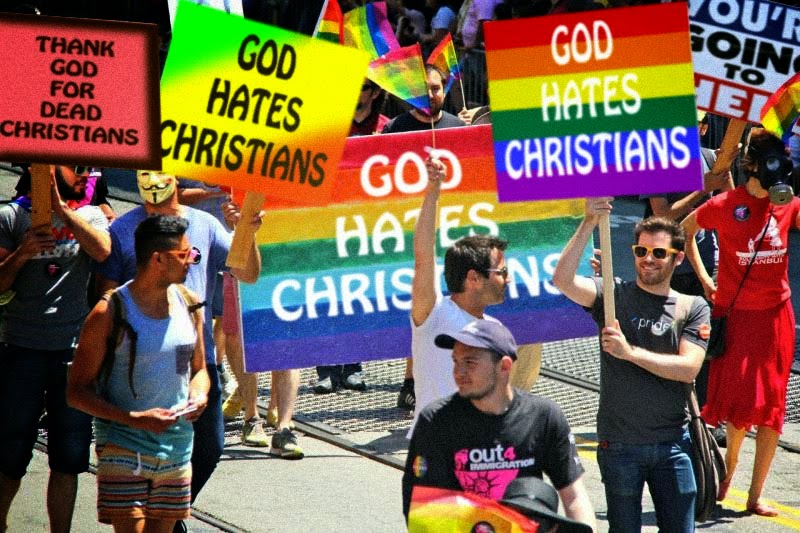 I saw this coming. Yes, I really, really did.

After the whole mob melee over Indiana's RFRA and Memories Pizza, I wrote:

Some of us have taken to calling the Left the 'Westboro Tolerance Church', especially after the rabid hatred they exhibited regarding Memories Pizza. Why? Because they act the same way as does the vile, repulsive, and depraved Westboro Baptist Church. Since the Left turns everything upside down and changes words, definitions, history, culture, tradition whenever the 'need' arises, I will not be the least bit surprised when they start screaming 'God Hates Christians'.

Already they are trying to change Christianity so as to use it to further their agenda. Will anyone be surprised when they start claiming that 'God Hates Christians' once the latter do not fall in line? It's what they do...every. damn. time.

I, for one, will not be the least bit shocked...and, I'm an atheist.

Some, on both the left and the right, thought that I was being hysterical and such would never happen.  Well, about the only thing I failed to foresee was just how quickly it would begin to happen.  EIGHT. BLOODY. DAYS.

If you were one of the naysayers or naythinkers, you can apologise in the comments (Just kidding).

LoveCrime: Someone Vandalized a Church, Causing $10,000 In Damages, By Painting It With Pro-Gay Messages —Ace

From IJR, this report from Fox8.

JAMESTOWN, N.C. -- The Guilford County Sheriff’s Office is investigating after a church was vandalized sometime between Friday night and Saturday morning.

Bales Memorial Wesleyan Church in Jamestown was spray painted, had flowers torn up, parking signs were ripped up and windows were broken.

The church sign was also broken and letters removed and the front entrance to the church was egged and sprayed with silly string.

One spray-painted message on the church door reads, "God loves (expletive)!!! He hates you!" Another said "Gay’s ok!"

The church bus was also damaged by the suspects keying the hood and pushing a sign through the front grill.

Click the IJR link -- another church in the same county was also vandalized with pro-gay graffitti.

This will not get any attention because the media approves of vandalism directed against Christians.


He's absolutely correct.  It won't get any real attention, which is a shame in more ways than one.  Obviously, the alleged vandalism committed in the name of LGBT rights on a Christian place of worship will be suppressed by our 'media' because 'we can't allow the victim mantle be passed onto homophobes' by the Westboro Tolerance Church 'especially since we remember how well ACT-UP's assault of St Patrick's Cathedral worked out the last time.'  Yes, we know that's the reason they will bury this...just like they do - or at least play down - the Islamic connection to assaults and executions on officers in the NYPD and beheadings in Oklahoma.  Here's the thing though: The Methodist Church is probably one of the most accepting of SSM of all of the Christian denominations in America.

Church leaders have embraced same-sex marriage and argued that Christianity has no problem whatsoever with homosexuality....even at the cost of its own survival:

The MSM is so wedded (pun, absolutely intended) to protecting the LGBT community at all costs that it will remain mum when members of the Westboro Tolerance Church frags its own supporters.

Make. No. Mistake. If you are a Christian - even one that supports gay rights - you are part of the problem...because, at the end of the day, the Left's real goal isn't gay rights, per se, but destruction of Christianity and Judaism.

Now, if you are a Muslim, you can get away with anything...because Muslim trumps Gay.  If you think otherwise:

Muslim > gay,
black > female,
and everybody > the Jews

Why the Left Casts a Blind Eye on Radical Islam

By their silence, you shall know them.

Their hate was predicted:


And ye shall be hated of all men for my name's sake: but he that endureth to the end shall be saved.

If the world hate you, ye know that it hated me before it hated you.


So, to my Christian friends I say, if you sacrifice your sincerely-held religious beliefs in order to be loved by others, Jesus would probably say:


You're doing it wrong!


Now, if anyone is interested in my answer to the Question of the Day: Would you attend a gay wedding?

My answer is the same as it is with heterosexual weddings: Must I?

I don't like weddings and only attend those from which I am, unfortunately, unable to excuse myself.

If your feelings are hurt, suck it up, buttercup...and get a cat.

PS: Once again, thank you, Bmore, for making my idea a reality!

Hillary's Horrible Logo: Did She Rip It Off From A Now-Defunct British Grocery Store?

Hillards was a small chain store in the north. It was taken over by Tesco in the late '80s.

But we have found the definitive, argument ending inspiration for the Hillary 2016 logo. Are you ready to have your mind blown?

The UK's first - and only - female Prime Minister, Margaret Thatcher, may have been the daughter of a grocer, but she never needed to rip off the logo of a defunct grocery.

One of the grocery stores owned by Alfred Roberts, the father of Baroness Thatcher.

Pic of the Day: Kids, Do You Know What Time It Is?