The Founding Fathers & The Second Amendment 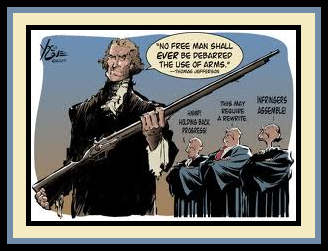 "I ask, Sir, what is the militia? It is the whole people. To disarm the people is the best and most effectual way to enslave them."

- George Mason, co-author of the Second Amendment during Virginia's Convention to Ratify the Constitution, 1788

"A militia, when properly formed, are in fact the people themselves …"

- Richard Henry Lee, writing in Letters from the Federal Farmer to the Republic, Letter XVIII, May, 1788.

"The people are not to be disarmed of their weapons. They are left in full possession of them."

- Zachariah Johnson, Elliot's Debates, Vol. 3 "The Debates in the Several State Conventions on the Adoption of the Federal Constitution."

"And that the said Constitution be never construed to authorize Congress to infringe the just liberty of the Press, or the rights of Conscience; or to prevent the people of the United States, who are peaceable citizens, from keeping their own arms; …"

"Firearms stand next in importance to the constitution itself. They are the American people's liberty teeth and keystone under independence … from the hour the Pilgrims landed to the present day, events, occurrences and tendencies prove that to ensure peace security and happiness, the rifle and pistol are equally indispensable … the very atmosphere of firearms anywhere restrains evil interference — they deserve a place of honor with all that's good."

"To preserve liberty, it is essential that the whole body of the people always possess arms and be taught alike, especially when young, how to use them."

"The great object is that every man be armed." and "Everyone who is able may have a gun."

"Are we at last brought to such humiliating and debasing degradation, that we cannot be trusted with arms for our defense? Where is the difference between having our arms in possession and under our direction and having them under the management of Congress? If our defense be the real object of having those arms, in whose hands can they be trusted with more propriety, or equal safety to us, as in our own hands?"

"Those who hammer their guns into plowshares will plow for those who do not."

"The constitutions of most of our States assert that all power is inherent in the people; that … it is their right and duty to be at all times armed;… "

"The best we can help for concerning the people at large is that they be properly armed."

- Alexander Hamilton, The Federalist Papers at 184-8

"A strong body makes the mind strong. As to the species of exercises, I advise the gun. While this gives moderate exercise to the body, it gives boldness, enterprise and independence to the mind. Games played with the ball, and others of that nature, are too violent for the body and stamp no character on the mind. Let your gun therefore be your constant companion of your walks."
- Thomas Jefferson to Peter Carr, 1785, The Writings of Thomas Jefferson

"One loves to possess arms, though they hope never to have occasion for them."

"We established however some, although not all its [self-government] important principles. The constitutions of most of our States assert, that all power is inherent in the people; that they may exercise it by themselves, in all cases to which they think themselves competent, (as in electing their functionaries executive and legislative, and deciding by a jury of themselves, in all judiciary cases in which any fact is involved,) or they may act by representatives, freely and equally chosen; that it is their right and duty to be at all times armed."

"No freeman shall ever be debarred the use of arms."

Gun control advocates always point to the word "militia" in the Second Amendment as proof that the Founders would support gun control laws.  That contention is not supported by the historical documents.  As the Founders continually acknowledged, A MILITIA IS THE WHOLE OF THE PEOPLE.  In fact, in the Second MILITIA Act of 1792, ALL able-bodied, white men over the age of 18 were required to possess a gun.

William Rawle, authored "A View of the Constitution of the United States of America" in 1829. His work was adopted as a constitutional law textbook at West Point and other institutions. In Chapter 10, he describes the scope of the Second Amendment's right to keep and bear arms:

"The prohibition is general. No clause in the constitution could by any rule of construction be conceived to give congress a power to disarm the people. Such a flagitious attempt could only be made under some general pretence by a state legislature. But if in any blind pursuit of inordinate power, either should attempt it, this amendment may be appealed to as a restraint on both."

Chief Justice Story (appointed to the Supreme Court as an Associate Justice by James Madison in 1811), wrote a constitutional commentary in 1833 ("Commentaries on the Constitution of the United States"). Regarding the Second Amendment, he wrote:

The next amendment is: "A well regulated militia being necessary to the security of a free state, the right of the people to keep and bear arms shall not be infringed."

The importance of this article will scarcely be doubted by any persons, who have duly reflected upon the subject. The militia is the natural defence of a free country against sudden foreign invasions, domestic insurrections, and and domestic usurpations of power by rulers. It is against sound policy for a free people to keep up large military establishments and standing armies in time of peace, both from the enormous expenses, with which they are attended, and the facile means, which they afford to ambitious and unprincipled rulers, to subvert the government, or trample upon the rights of the people. The right of the citizens to keep and bear arms has justly been considered, as the palladium of the liberties of a republic; since it offers a strong moral check against the usurpation and arbitrary power of rulers; and will generally, even if these are successful in the first instance, enable the people to resist and triumph over them."

The Purpose of the Militia Clause:

"Collective rights theorists argue that addition of the subordinate clause qualifies the rest of the amendment by placing a limitation on the people's right to bear arms. However, if the amendment truly meant what collective rights advocates propose, then the text would read "[a] well regulated Militia, being necessary to the security of a free State, the right of the States to keep and bear Arms, shall not be infringed." However, that is not what the framers of the amendment drafted. THE PLAIN LANGUAGE OF THE AMENDMENT, WITHOUT ATTENUATE INFERENCES THEREFROM, SHOWS THAT THE FUNCTION OF THE SUBORDINATE CLAUSE WAS NOT TO QUALIFY THE RIGHT, BUT INSTEAD TO SHOW WHY IT MUST BE PROTECTED. The right exists independent of the existence of the militia. If this right were not protected, the existence of the militia, and consequently the security of the state, would be jeopardized." (U.S. v. Emerson, 46 F.Supp.2d 598 (N.D.Tex. 1999)).