When It Comes To Intent, Let's Take Terrorists At Their Word 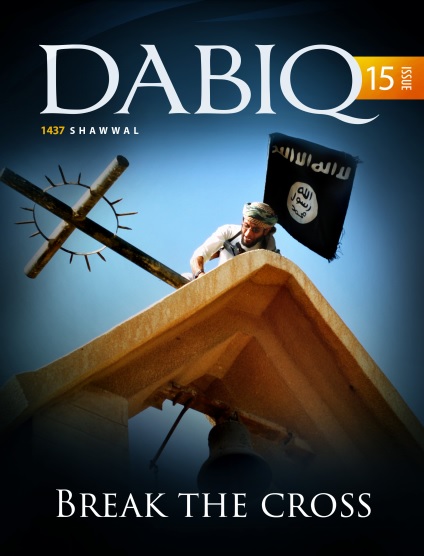 More insanity from the Democrat party and the Globalist Left …

Hillary Clinton: Best Way to Stop Terrorism Is to “Understand” Other Cultures- Eat Their Food (VIDEO) 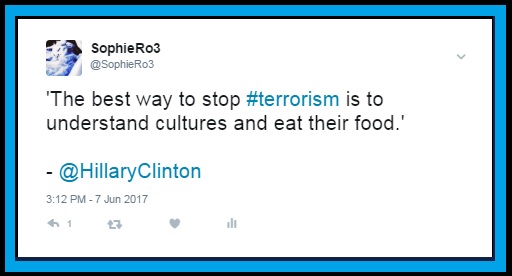 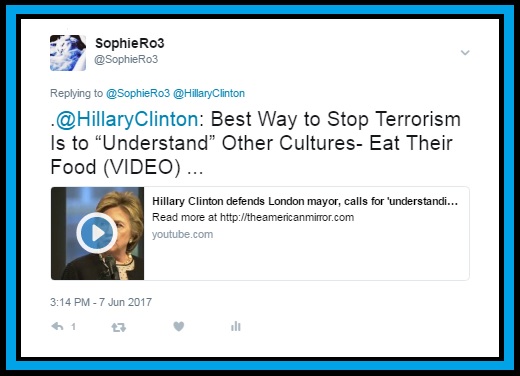 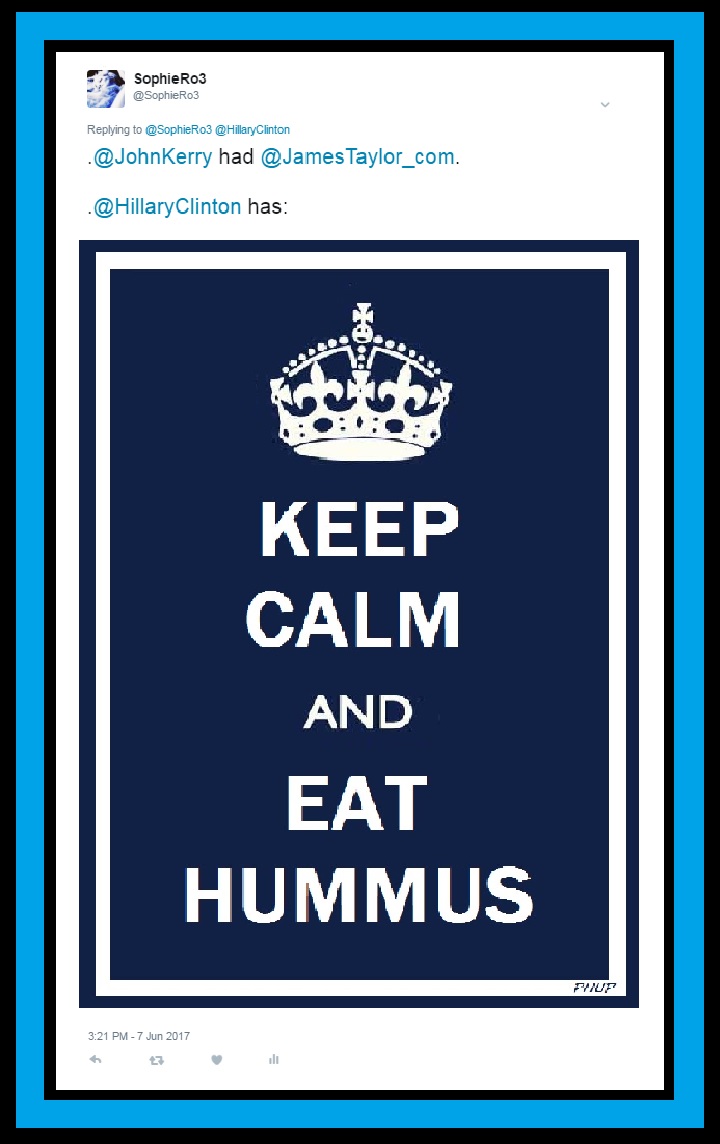 Hillary Clinton defended London Muslim Mayor Sadiq Khan on Monday.  That would be THIS Sadiq Khan:

Khan referred to ‘moderate Muslims’ as ‘Uncle Tom’s’ in an interview with Iranian-backed Press TV from 2009, when he was ‘minister for community cohesion’, in charge of Government efforts to stamp out extremism.

And, THIS Sadiq Khan:


'Mr Louis Farrakhan is NOT anti-Semitic and does not preach a message of racial hatred and antagonism!'

In 2002, Khan represented the leader of the Nation of Islam, Louis Farrakhan. Khan tried to reverse a decision by the Home Office, which had banned Farrakhan from entering the UK due to fears that his anti-Semitic views would stir up racial hatred. Farrakhan has called Jews "bloodsuckers" and referred to Judaism as "a gutter religion."

'He is preaching a message of self-discipline, self-reliance, atonement and responsibility. He's trying to address the issues and problems we have in the UK, black on black crime and problems in the black community. It's outrageous and astonishing that the British Government is trying to exclude this man.'

Mr Farrakhan has been banned by successive home secretaries since 1986 when the then government barred him on the grounds he expressed racist and anti-Semitic views.


And, THIS Sadiq Khan:

Anyhoo, the former Democrat nominee for President of the United States of America, Commander-in-Chief, and Leader of the Free World put down her Chardonnay and left the woods long enough to impart these pearls of peace 'wisdom':

'The best way to stop terrorism is to understand cultures and eat their food.'

Sorry, Hills, I've read ISIS' official magazine, Dabiq, and your prescription of understanding cultures and eating their food as the best way to stop terrorism doesn't appear AT ALL.

Instead of finding additional reasons to fill your piehole with food (You could cut to the chase and just apply your fatty delights liberally to your fatty thighs), you should try reading what the terrorists are ACTUALLY saying and what they ACTUALLY want.  Also, when it comes to Islam and Islamic terrorism, I'll take their words over your Methodist ones. Just as I cannot tell you what religion you are, you, a nominal Christian, do not get to decide whether or not someone is a Muslim.

The Islamic State's Official Magazine, Dabiq: ‘Break The Cross: Why We Hate You and Why We Fight You’

'Do they not see that they are tried once or twice every year? Yet they turn not in repentance, and they take no heed?'

After the attacks in Orlando (USA), Dhaka (Bangladesh), Magnanville, Nice, and Normandy (France), and Würzburg and Ansbach (Germany) led to the martyrdom of twelve soldiers of the Caliphate and the deaths and injuries of more than six hundred Crusaders, one would expect the cross-worshipers and democratic pagans of the West to pause and contemplate the reasons behind the animosity and enmity held by Muslims for Westerners and even take heed and consider repentance by abandoning their infidelity and accepting Islam. But the fever and delusion caused by sin, superstition, and secularism have numbed what is left of their minds and senses. Their hedonistic addictions and heathenish doctrines have enslaved them to false gods including their clergy, their legislatures, and their lusts. As for worshiping the Creator alone and following His Final Messenger, then that is beyond their consideration. Instead, they wage war against what entails both their welfare in the worldly life and their salvation in the Hereafter. They wage war against their Creator, His word, His law, His Messenger, and His slaves. And they shamelessly confess their disbelief in His wisdom, mercy, and justice, by thinking that the Lord would abandon His religion and His slaves to the tyranny of His enemies and their evilness. And despite their wretched condition of ignorance and arrogance, we take this occasion of multiple massacres inflicted upon their citizens and interests to call them once again to the religion of pure monotheism, truth, mercy, justice, and the sword. Between the release of this issue of Dabiq and the next slaughter to be executed against them by the hidden soldiers of the Caliphate – who are ordered to attack without delay – the Crusaders can read into why Muslims hate and fight them, why pagan Christians should break their crosses, why liberalist secularists should return to the fitrah (natural human disposition), and why skeptical atheists should recognize their Creator and submit to Him. In essence, we explain why they must abandon their infidelity and accept Islam, the religion of sincerity and submission to the Lord of the heavens and the earth.1

Footnote 1: Islam is derived from the Arabic words istislam/salamah, MEANING SUBMISSION and sincerity. THIS IS THE ESSENCE OF ISLAM: TO SUBMIT TO ALLAH SINCERELY AND TO HIM ALONE.

'The point is, people know that it’s foolish, but they keep repeating it regardless because they’re afraid of the consequences of deviating from the script.'

Reasons 'why we hate you and why we fight you':

'We hate you, first and foremost, because you are disbelievers; you reject the oneness of Allah – whether you realize it or not – by making partners for Him in worship, you blaspheme against Him, claiming that He has a son, you fabricate lies against His prophets and messengers, and you indulge in all manner of devilish practices. ... Furthermore, just as your disbelief is the primary reason we hate you, your disbelief is the primary reason we fight you, as we have been commanded to fight the disbelievers until they submit to the authority of Islam.'

Other reasons why they hate and fight us, the West:

Summing up, the Dabiq writer states:

'The fact is, even if you were to stop bombing us, imprisoning us, torturing us, vilifying us, and usurping our lands, we would continue to hate you because our primary reason for hating you will not cease to exist until you embrace Islam. Even if you were to pay jizyah [tax for infidels] and live under the authority of Islam in humiliation, we would continue to hate you.'

Given their actual words and stated intentions, not only do I seriously doubt that 'understanding their culture and eating their food' would do one bloody thing to end terrorism, I, personally, wish not to partake in anything associated with their homicidal, genocidal, suicidal, child-abusing, paedophilic, misogynistic, homophobic, science-denying, anti-Semitic, Christophobic, Neanderthalist, caliphate-seeking, illiterate and inbred invasion foot soldiering, totalitarian 7th century death cult.

I'd rather take their word for why they do what they do than your politically-correct psychobabble. I would like to live rather than being mowed down by a truck. Your mileage my vary, but I'm funny like this.  I'll take being hated for my truthful words over being buried six feet under ANYDAMNDAY.

Should you wish to copy and paste the Dabiq quote: 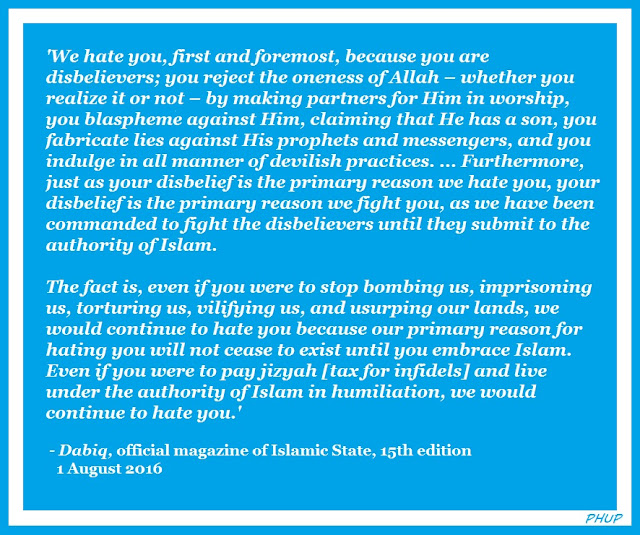