CBS 11 reports that police have taken a 14 year old runaway into custody at Occupy Dallas:

When police took the girl into custody Sunday afternoon she reportedly told them she had been having sex with a man in his 20’s at the Occupy Dallas encampment and had engaged in sexual activity with several other people.

One Occupy Dallas protestor said if the allegations are true measures should be taken to ensure everyone’s safety.

“We’ll find out what the truth is and if that’s her story, that she was having sex with older men in the park, I guess we really need to watch the age group that’s coming in here and get control of that,” Rich Coffman said.

The news story doesn’t use the R-word, but if the allegations are true that would seem a violation of the statutory rape law in the state of Texas. Police are still investigating.

Hat tip to Daily Kos who noted this story and provided a link.

I noted the first reports of this over the weekend, but now there is video of the tagging:
In LA, the anarchists have decided to tag news vans.

A mob of 20-somethings enters a bank with a bullhorn, clearly freaking out the bank tellers:

They moved on to two other banks including this one where they chant “What’s the solution?…Revolution!” and “Bring down the banks!”

Note the guy who puts the 9-11 truther bumper sticker on the ATM machine. Is that vandalism?

A protester in San Jose has scaled a 36-foot wall near city hall and is refusing to come down, saying he has the provisions necessary to stay put indefinitely.
Shaun O’Kelly, 27, climbed the wall in the wee hours of Monday morning after police arrested four other protesters and cited one for camping on city property. The San Jose Mercury News has more:

“I’m going to stay up here as long as I can,” said O’Kelly, who scaled the wall by standing on a garbage can and grabbing hold onto an overhang. He said he has blankets, garbage bags and food. The wall is about three stories high and five feet wide.

O’Kelly put up a sign at the top of the wall that reads: “10 idling vehicles, 14 police officers, 4 peaceful protesters. Is your money being spent wisely San Jose?”

O’Kelly, who has reportedly been cited several times during the Occupy San Jose protest, is also holding up a sign that reads: “Stand up for what you believe in” and “No More” on the flip side.’

For now, police have not gone after the man. Still, they’re hoping for a peaceful resolution.


“We‘re hoping he’ll come down and we can make contact with him then,” police Sgt. Jose Garcia told the Mercury News.

Occupy Milwakee protest leader Austin Thompson was arrested yesterday outside of the M&I Bank at 770 N. Water St. after he led a group of far left protesters inside the bank yesterday and screamed, “This is a hostile takeover!”


The local police were called and the far left loon was marched away in cuffs.
They’re lucky they didn’t get blasted.


His supporters want charges dropped against the organiser.

JS Online reported on the arrest:

A man who has been involved in past protests in Milwaukee was arrested Thursday during a protest by Occupy Milwaukee at a downtown bank, but within hours different versions of what led to the arrest had emerged.


A 25-year-old man identified as Austin Thompson entered the downtown M&I branch and “yelled something to the effect of ‘this is a hostile takeover’ causing at least one clerk in the bank to believe that they were being robbed,” said Anne Schwartz, police spokeswoman.

Police said they were not tying the man to the Occupy Milwaukee protests that started over the weekend, but noted he has been previously cited at demonstrations in Milwaukee.


However, people who identified themselves as participants in the gathering organized by Occupy Milwaukee said no one had threatened the bank or anyone else.

Big Government has more on the arrest.

While the Occupiers hit bongo drums and have sing-alongs about crashing the American economic system, the rest of New York City is becoming a more dangerous place to live. 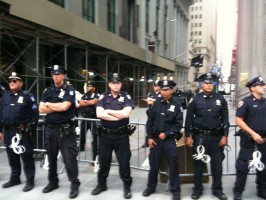 The crime statistics are in, and they are disturbing. In one week this month, there was an over 150% spike in New Yorkers shot, a jump from 22 to 56 over the same period last year. Overall, the number of New Yorkers hit by bullets was up almost 30 percent in the last month as compared to last year, according to the New York Post.
The recent surge has pushed gun violence beyond last year’s tally as of October 16th. And the cops aren’t shy about identifying a major part of the problem: Occupy Wall Street.
To babysit the Zuccotti Park protestors, police have diverted important resources from the most crime-ridden areas of the city. One high-ranking NYPD officer told the Post:

“Normally, the task force is used in high-crime neighborhoods where you have a lot of shootings and robberies. They are always used when there are spikes in crime as a quick fix. But instead of being sent to Jamaica, Brownsville and the South Bronx, they are in Wall Street.” 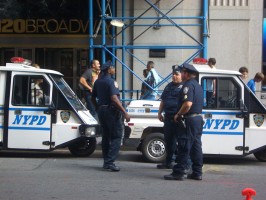 And while crimes are up, certain specialized units have been making fewer arrests. The Organized Crime Control Bureau, for one, has seen arrests drop 19% this year.
In this environment of rising crime, it should concern New Yorkers and all Americans that the NYPD is also receiving heavy criticism and defamation from Occupy Wall Street and its allies.
Crime is on the rise, and our police are embattled by leftists and a sympathetic media.
If the NYPD is having a hard time keeping New Yorkers safe while watching the Occupiers, other cities undergoing Occupation could see their security deteriorate much faster, with even more violence.

Posted by John Nolte
130 Chicago Occupiers are arrested, the park is filthy, their obnoxious drums drive the neighbors nuts and yet you can sense the admiration from these two at CNN who are supposedly charged with covering the story. One actually finds them “fascinating to watch” as the Occupiers, among other things, try to decide when to cease their drumming in order to stop annoying the neighbors. Really? That’s something that requires putting on a Big Think? I guess our CNN correspondent finds watching the stupid and self-involved fascinating. If that’s the case, maybe he should spend more time in the newsroom.

The disconnect between the video segment and the news story it’s attached to at CNN.com is even more “fascinating.”

The crowd of protesters was estimated at more than 1,000 before police announced they had to vacate the area, said Officer Robert Perez, spokesman for Chicago police. Most of the protesters left and went across the street into a public area, he said, and the rest were arrested.


Those arrested were taken to police’s First District headquarters, he said. The majority were booked for staying at the park after hours and released on their own recognizance, Perez said.

Can you imagine the MSM’s hysteria if 130 arrests were made – if these kinds of city resources were required to handle anything involving the Tea Party?
And how many crimes are being committed, how many victims are there in the City of Chicago with that kind of law enforcement personnel distracted by a bunch of lazy crybabies unified over their selfish desire to have something for nothing.
Thanks to these smelly narcissists who are mostly looking for a Wall Street-style bail out of their own student loans, shootings in the City of New York are up 154%. But how frequently are you hearing that figure from your MSM?


This is video of right after the man in the Joker make-up was arrested. I’ve skipped to a section near the end of this clip where a woman who apparently knows him describes how this started. Then someone else covers the camera:

If you watch the whole clip from the beginning you can see that the girl who covered the camera has a cell phone video of the entire incident which she is showing to the police. Needless to say, that video hasn’t appeared on You Tube and never will.


Update: So the story is that this 23 year old, Billy Joe Lewis-Kubisiak, was a drunk transient who started a fight over food. But that’s not what his girlfriend said in the clip. And the other video notes that police couldn’t confirm he was homeless. Also, KXAN’s written story notes that these details are not in the arrest report:


The arrest affidavit however did not confirm that this was a verbal altercation over food, only that Kubisiak got into an altercation with another man while walking up the stairs at city hall.  The affidavit also did not describe Kubisiak as transient or intoxicated…

Some occupiers described Kubisiak as a ‘bad apple’–something you can find in any large group.

Emails Expose the True Nature of the #Occupy Movement