It's Not Fascism When We Do It: The Senate To Decide Who Gets First Amendment Protections 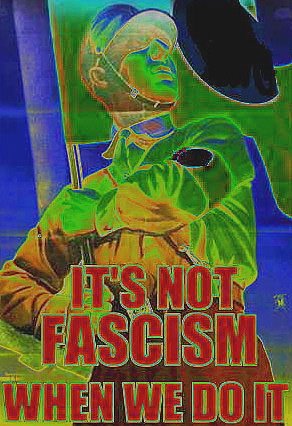 'I can’t support it if everyone who has a blog has a special privilege...I’m not going to go there.'

The Fascists in the Senate have let their totalitarian freak flags fly!  They are going to decide who is a journalist...

From The Los Angeles Times:

Journalists and bloggers who report news to the public will be protected from being forced to testify about their work under a media shield bill passed by a Senate committee Thursday.

But the new legal protections will not extend to the controversial online website Wikileaks and others whose principal work involves disclosing “primary-source documents … without authorization.” …

Sen. Dianne Feinstein (D-Calif.) insisted on limiting the legal protection to “real reporters” and not, she said, a 17-year-old with his own website.

“I can’t support it if everyone who has a blog has a special privilege … or if Edward Snowden were to sit down and write this stuff, he would have a privilege. I’m not going to go there,” she said.

Feinstein introduced an amendment that defines a “covered journalist” as someone who gathers and reports news for “an entity or service that disseminates news and information.” The definition includes freelancers, part-timers and student journalists, and it permits a judge to go further and extend the protections to any “legitimate news-gathering activities.”

BUT, the amendment has a HUGE loophole...

'But the bill also makes it clear that the legal protection is not absolute. Federal officials still may “compel disclosure” from a journalist who has information that could stop or prevent crimes such as murder, kidnapping or child abduction or prevent “acts of terrorism” or significant harm to national security.'

It should also be noted that the Fascism runs deep on both sides of the aisle...

‘Who is a journalist is a question we need to ask ourselves. Is any blogger out there saying anything — do they deserve First Amendment protection? These are the issues of our times. You can sit in your mother’s basement and chat away, I don’t care. But when you start talking about classified programs, that’s when it gets to be important. So, if classified information is leaked out on a personal website or [by] some blogger, do they have the same First Amendments rights as somebody who gets paid [in] traditional journalism?’

I mean, it's not as though the First Amendment doesn't leave them wiggleroom.  Oh, wait...

Congress shall make no law respecting an establishment of religion, or prohibiting the free exercise thereof; or abridging the freedom of speech, or of the press; or the right of the people peaceably to assemble, and to petition the Government for a redress of grievances.

'Congress shall make NO law.'  You'd think that would tell them something.  Of course, with Progressives on BOTH sides of the aisle, the Constitution is just something to be ignored.   They are attempting to be too cute by half by ignoring the word 'PRESS' and trying to substitute 'JOURNALIST.'  But, the First Amendment does not limit the protection of the press to those employed by traditional news organisations.

Fortunately - and, I write that knowing of Chief Justice John Roberts failure to adhere to his constitutional role in the past. You're supposed to INTERPRET law, not rewrite it, John! - the Supreme Court has laid down some precedent that may help kill off such Fascist asininity should it ever be passed by Congress and signed into law:

‘The Bill of Rights changed the original Constitution into a new charter under which no branch of government could abridge the people’s freedoms of press, speech, religion, and assembly. Yet the Solicitor General argues and some members of the Court appear to agree that the general powers of the Government adopted in the original Constitution should be interpreted to limit and restrict the specific and emphatic guarantees of the Bill of Rights adopted later. I can imagine no greater perversion of history.

Madison and the other Framers of the First Amendment, able men that they were, wrote in language they earnestly believed could never be misunderstood: ‘Congress shall make no law . . . abridging the freedom... of the press. . .’

Both the history and language of the First Amendment support the view that the press must be left free to publish news, whatever the source, without censorship, injunctions, or prior restraints…In the First Amendment, the Founding Fathers gave the free press the protection it must have to fulfill its essential role in our democracy.

In other words, we are asked to hold that, despite the First Amendment’s emphatic command, the Executive Branch, the Congress, and the Judiciary can make laws enjoining publication of current news and abridging freedom of the press in the name of ‘national security.’

The Founding Fathers gave the free press the protection it must have [to] bare the secrets of government and inform the people.’

The Free Press Clause protects the freedom to publish, not solely writers and commercial publishers. The Founders intended for the lowliest, volunteer pamphleteer have the same constitutional protections as the Publisher of the New York Times or ‘journalists,’ who are paid for their work. The protection is to the publication – IN ANY MANNER – not merely to those doing the publishing (just as lawmakers were not full-time and had other jobs in the ‘real world,’ the Founding Fathers recognised that one could be both a farmer and a member of the ‘press.’) Under the definition proposed by the Senate, Thomas Paine would not have had First Amendment protection. What kind of Common Sense is that?

In the first case dealing with the Free Press Clause, Lovell v City of Griffin, 303 U.S. 444 (1938), Chief Justice Charles Evans Hughes writing for the majority of the Supreme Court defined ‘press’ as ‘every sort of publication which affords a vehicle of information and opinion’ based upon the writings of the Founding Fathers.

The ‘press’ be it someone at the NYT or a blogger has First Amendment rights and CANNOT be prosecuted for seeking and publishing information.  Under Dianne 'I'm not a 6th grader!  Are you sure?' Feinstein's bill, bloggers such as myself would not be covered because my journalist pursuit here is not for commercial purposes.  If I broke a huge story involving a politician - let's make him a Republican since the 'rules' seem to vary depending upon political affiliation - that was selling national security secrets to al-Qaeda, I would be forced to submit to the Federal government and to turn over all information regarding my sources.  Those sources would be very reluctant to confide in me if I were unable to confer upon them the same confidentiality that, say, a reporter from the New York Times could.  With a Republican, the New York Times would most certainly publish the story, but what if the politician were a Democrat?  Could we be assured that it would, especially in an election season when Democratic-control of the White House and/or Congress was at risk?  I think that we know the answer to that question.

I am sick and tired of these assholes in Washington.  They may claim that no right is absolute, but, trust me, what they want is an absolute power over the people.