The United States Is The Great Global Enabler 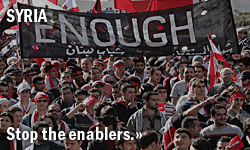 The Merriam-Webster dictionary defines an enabler as “one who enables another to persist in self-destructive behavior.” They do so “by providing excuses or by making it possible to avoid the consequences of such behavior.”

In popular culture, the term is often associated with a family covering for a drunk or drug addict. Their motives for doing so are generally good in the short-term sense of not wanting the addict to fail or be humiliated. The family members truly want to help and be supportive. But the very act of letting their loved one avoid responsibility for their actions enables the addiction to continue or get worse.

On a much larger scale, U.S. foreign policy over the past two decades has enabled global irresponsibility. Because we are always ready to intervene anywhere on the planet, the United States has protected other nations from dealing with the short-term realities of difficult foreign policy decisions. This allows both friend and foe to posture and pass judgment without consequence. As a result, we have created a more dangerous world.

We’re seeing the fruits of this misguided policy play out in Syria today. Our intentions and motives are good. We hate the slaughter and brutality of that civil war. We hate the use of chemical weapons upon civilians. We want somebody to stop it. We want the international rules against chemical warfare upheld.

Adding to the dilemma, President Obama sees his own credibility at stake. Syria brazenly crossed a “red line” that he mistakenly established. Senator John McCain believes our nation’s credibility is on the line, as well.

But American voters don’t believe it’s our fight. They don’t believe that vital national security interests of the Unite States are at stake. They recognize that other nations, closer to Syria, have much more to lose than we do. Why does the United States have to police the world? Why won’t other nation’s step forward?

The reason is simply that our interventionist foreign policy has allowed and encouraged other nations to act irresponsibly. They won’t step forward because they know we will.

It is time for the United States to end our enabling behavior.

The place to start is by staying out of Syria and let other nation’s respond as they see fit.

There is no guarantee as to what will happen next and it will certainly be uncomfortable in the short-term. The same thing happens when a family first stops covering for a drug addict. It is painful to watch others deal with the responsibility from which they have been spared for so long. However, in both the family setting and U.S. foreign policy, allowing consequences to be felt in the short-term encourages responsibility in the long-term.

The Cato Institute’s Christopher Preble puts it this way: “If we encouraged other countries to be responsible for their own security they would be better able, and therefore more willing, to play a constructive role even when their interests are not directly at stake.” A former naval officer, Preble outlines his thoughts more fully in a thought-provoking book, “The Power Problem: How American Military Dominance Makes Us Less Safe, Less Prosperous and Less Free”.

The first step on the path to a more responsible global community is to say no to U.S. involvement in Syria.