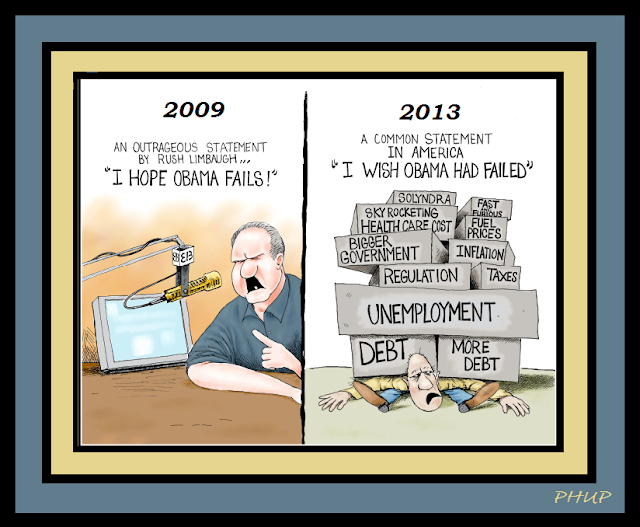 
There should have been something for everyone in President Barack Obama’s second inaugural address. For liberals, a full-throated call to arms. For conservatives, vindication.


Obama settled once and for all the debate over his place on the political spectrum and his political designs. He’s an unabashed liberal determined to shift our politics and our country irrevocably to the left. In other words, Obama’s foes — if you put aside the birthers and sundry other lunatics — always had him pegged correctly.

If you listened to Rush Limbaugh, Sean Hannity and Laura Ingraham, you got a better appreciation of Obama’s core than by reading the president’s friends and sophisticated interpreters, for whom he was either a moderate or a puzzle yet to be fully worked out.

Rush, et al., doubted that Obama could have emerged from the left-wing milieu of Hyde Park, become in short order the most liberal U.S. senator, run to Hillary Clinton’s left in the 2008 primaries and yet have been a misunderstood centrist all along. They heeded his record and his boast in 2008 about “fundamentally transforming the United States of America,” and discounted the unifying tone of his rhetoric as transparent salesmanship.

They got him right, even as he duped the Obamacons, played the press and fooled his sympathizers.

David Brooks, the brilliant and winsome New York Times columnist, has been promising the arrival of the true, pragmatic Obama for years now.


In his column praising the second inaugural address, he appeared finally to give up. “Now he is liberated,” Brooks wrote. “Now he has picked a team and put his liberalism on full display.”

Paul Krugman, also of The New York Times, wrote blog posts over the past few years titled “Obama the Moderate” and “Obama the Moderate Conservative.” For Krugman, Obama could never have proved himself a liberal short of an order to liquidate the kulaks. Even he, though, wrote of the second inaugural: “Obama has never been this clear before about what he stands for.”


The media, as a general matter, loved the speech. They praised Obama’s post-partisanship and now they praise his post-post-partisanship. They aren’t strictly contradicting themselves because the content is the same. In his old post-partisan phase, the president passed a nearly $1 trillion stimulus, a universal health care bill sought by the left for decades and a massive regulation of Wall Street. All prior to his “liberation.”

One theory is that Obama has been forced into his unabashed liberalism by the irrational recalcitrance of Republicans. But you don’t advance a philosophically cogent view of American history in an inaugural address in a fit of pique. It wasn’t Senate Minority Leader Mitch McConnell who made Obama believe that progressivism somehow represents the logical outgrowth of the American founding. It wasn’t House Speaker John Boehner who made him weave Medicaid, Medicare and Social Security into the flag as the 51st, 52nd and 53rd stars.

Yes, Obama would have preferred to pass his agenda with Republican votes. That wouldn’t have made the agenda any different or changed his conviction that History with a capital “H” runs in one direction — toward more government and social liberalism. If anything, it would have re-enforced his belief that his remaining opponents were outside the mainstream and deserving only of his pity or his scorn.

Obama is making his play, as the newest cliché goes, to become the liberal Reagan. As soon as he won reelection, we went from the Obama administration to the Obama years, and that is no mean feat.

Becoming an enduringly transformational figure like Reagan, though, is a different proposition. He will have to leave office adored. He will have to cement his legacy by winning a de facto third term. His big policies will have to work, as Reagan’s did in winning the Cold War and reviving the economy.

For all of the ideological ambition of his second inaugural, the policy agenda was thin or unachievable. Reducing wait-times at the polls isn’t a major item. At the federal level, gay marriage is largely up to the courts. He will get much less on guns than he wants and probably nothing significant from Congress on climate change.  His best chance for a breakthrough is on immigration, which divides Republicans.

The virtue of the address was making his intentions unmistakable, although Rush Limbaugh never mistook them in the first place.