The Appeaser Comes Clean: "Peace In Our Time"

"We, the people, still believe that enduring security and lasting peace do not require perpetual war.

Our brave men and women in uniform tempered by the flames of battle are unmatched in skill and courage.

Our citizens seared by the memory of those we have lost, know too well the price that is paid for liberty. The knowledge of their sacrifice will keep us forever vigilant against those who would do us harm. But we are also heirs to those who won the peace, and not just the war. Who turn sworn enemies into the surest of friends. And we must carry those lessons into this time as well. We will defend our people, and uphold our values through strength of arms, and the rule of law.  We will show the courage to try and resolve our differences with other nations peacefully. Not because we are naive about the dangers we face, but because engagement can more durably lift suspicion and fear.

America will remain the anchor of strong alliances in every corner of the globe. And we will renew those institutions that extend our capacity to manage crisis abroad. For no one has a greater stake in a peaceful world than its most powerful nation. We will support democracy from Asia to Africa, from the Americas to the Middle East, because our interests and our conscience compel us to act on behalf of those who long for freedom. And we must be a source of hope to the poor, the sick, the marginalized, the victims of prejudice.

Not out of mere charity, but because PEACE IN OUR TIME requires the constant advance of those principles that our common creed describes; tolerance and opportunity, human dignity and justice.

We the people declare today that the most evident of truth that all of us are created equal -- is the star that guides us still; just as it guided our forebears through Seneca Falls and Selma and Stonewall; just as it guided all those men and women, sung and unsung, who left footprints along this great mall, to hear a preacher say that we cannot walk alone; to hear a King proclaim that our individual freedom is inextricably bound to the freedom of every soul on Earth."


First things first, does anyone at the White House know the history of the phrase "Peace in our Time"?   It was first uttered by Prime Minister Benjamin Disraeli upon his return from the Congress of Berlin in 1878 where the Chancellor Otto von Bismarck held meetings at Bismarck’shis chancellory, the former Radziwill Palace, with other European leaders to discuss the recognition of the Balkan countries following the Russo-Turkish War of 1877–78 and The Treaty of San Stefano, of which the Congress revised or eliminated 18 of the 29 articles.

In addition to Disraeli, representatives such as the State Chancellor-Prince Alexander Mikhailovich Gorchakov, and two another Russian dignitaries, Count Pyotr Andreyevich Shuvalov and Baron d'Oubril represented Russia; Ambassador Count Alajos Károlyi de Nagykároly, who represented the Austro-Hungarian Empire, Count Gyula Andrássy, the Prime Minister of Hungary, and Baron Heinrich Karl von Haymerle  represented Austria); the French were represented by  The Prime Minister William Henry Waddington and the diplomat Melchior de Vogüé; the Kingdom of Italy was represented by diplomats, Count Lodovico Corti and Count De Launay; the Kingdom of Prussia was represented by Auguste, Baron Lambermont, Minister of State, Envoy Extraordinary and Minister Plenipotentiary, and many more were in attendance.

According to A. J. P. Taylor, writing in 1954: "If the treaty of San Stefano had been maintained, both the Ottoman Empire and Austria-Hungary might have survived to the present day. The British, except for Beaconsfield in his wilder moments, had expected less and were therefore less disappointed. Salisbury wrote at the end of 1878: We shall set up a rickety sort of Turkish rule again south of the Balkans. But it is a mere respite. There is no vitality left in them."

The overarching discussions of that Congress did provide for a modicum of peace between the Austro-Hungarian Empire, Russia, Poland, Prussia, and the Slavic states until the Black Hand's Gavrilo Princip put two bullets into Archduke Franz Ferndinand and his wife, Sophie, Duchess of Hohenberg, and started the bloodiest war man had yet ever known. 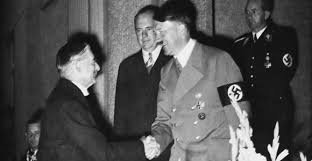 It was not a smashing success in the vein of some major breakthrough like Nixon with China or Reagan and Gorbachev, but it was not the frightful failure that would be waived in the air 60 years later by a man, who had just been played like a Stradivarius, by evil incarnate. 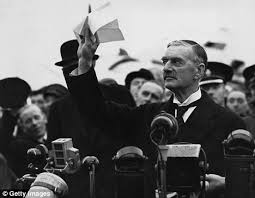 "The settlement of the Czechoslovakian problem, which has now been achieved is, in my view, only the prelude to a larger settlement in which all Europe may find peace. This morning I had another talk with the German Chancellor, Herr Hitler, and here is the paper which bears his name upon it as well as mine. Some of you, perhaps, have already heard what it contains but I would just like to read it to you: ' ... We regard the agreement signed last night and the Anglo-German Naval Agreement as symbolic of the desire of our two peoples never to go to war with one another again.'


Neville Chamberlain returned from Berlin and his meeting with Adolf Hitler to  heroes welcome.  He stood on the balcony facing The Mall with King George VI, Queen Elizabeth, and the young Princesses Elizabeth and Margaret. 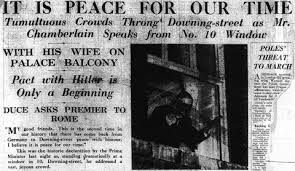 Just look at the first few lines of his triumphant "Peace in our Time"...


"The settlement of the Czechoslovakian problem, which has now been achieved is, in my view, only the prelude to a larger settlement in which all Europe may find peace..."


This piece of paper, upon which most the world sighed a collective relief, was a giant gag.   It is primarily remembered for its ironic value, as the German occupation of the Sudetenland a/k/a Czechoslovakia, which was a settled issue according to Chamberlain, began on the following day. The United Kingdom and France had a military alliance and defence pact with Poland.   In this alliance, if Poland was attacked, both Britain and France were required to come to its aid.  Thus, if Germany declared war upon Poland, then France and Britain were duty-bound by agreement to declare war upon Germany.

Less than 11 months later after Chamberlain's "triumph," Hitler invaded Poland in near tandem with Stalin's Red Army.  Less than a year after the agreement, following continued aggression from Germany and its invasion of Poland, Europe was plunged into World War II.

Obama's inclusion of the phrase "peace in our time" is a very strange statement unless he intends to play the Chamberlain role in future conflicts.  If so, the Mullahs and Ahmadinejad in Iran, along with the Muslim Brotherhood, must be thrilled beyond measure.

A few more comments on parts of his speech:

"We, the people, still believe that enduring security and lasting peace do not require perpetual war."

Typical strawman built by Strawman-Builder extraordinaire.  Other than Islamists, who practise jihad, I know of no one who believes in "perpetual war."  So, Obama has ended Iraq and is ending Afghanistan.   But, I feel the need to remind him of something one of his like-minded revolutionaries once said...

- Leon Trotsky, who was NEVER a Fascist...so please don't open your mouth.

I feel certain in stating that be they Libyan Militias, AQIM, al Qaeda anywhere, Algiers, Mali, Congo, Kenya, Jordan, Saudi Arabia, Pakistan, Chechnya, (neo)Afghanistan, Iran, (neo)Iraq, Egypt, etc, the Islamists are more interested in war than is Obama and it will be fought, perpetually or not.

It will not be "We, the people, who seek enduring security and lasting peace" that want perpetual war.

Yes, but as my only fave politician once said:

"Politicians forget that the only real peace dividend is peace."

Stopped going on domestic spending sprees!  You won a war.  The dividend you received is PEACE, not a green-light to try every dusty, decades-old domestic programme.

"We will support democracy from Asia to Africa, from the Americas to the Middle East, because our interests and our conscience compel us to act on behalf of those who long for freedom. And we must be a source of hope to the poor, the sick, the marginalized, the victims of prejudice."

We must be a beacon, but not a source of hope to the poor, the sick, the marginalised, the victims of prejudice.  How often has that worked out well?

Shall we continue the disastrous Wilson realpolitik, which Bush followed?

And, democracy, in and of itself, is not a nobel ideal.  Hitler came to power through democratic channels.   The Muslim Brotherhood  came to power in Egypt through democratic means; yet, its President has said that Jews are the descendants of "Pigs and sheep."  On 27 May 2012, Mohammed Morsi, President of Egypt, said, "[Coptic Christians] need to know that conquest in coming, and Egypt will be Islamic, and that they must pay the jizya or emigrate."  On 1 September 2012, he closed the last synagogue in Egypt.

You sing the praises of democracy when it suits your purposes.  When Prop 8 passed in California, you condemned it.  Was that not democracy?  Your envoy in the UK has stated that we shouldn't be given an in-out referendum "because Britain risked turning 'inward' if it held a referendum on the issue."

Let me get this straight:  Democracy is good for Egypt, but not the United Kingdom.  We reject your position and will do what is in the best interest of the British people.

Also, remember when you said you would not "meddle" in the internal affairs of other countries as Neda lay dying in the streets of Tehran?  Well, tell your bloke,  Philip Gordon, to MHOB.  We don't appreciate his high-handed ways and words:

"Not out of mere charity, but because PEACE IN OUR TIME requires the constant advance of those principles that our common creed describes; tolerance and opportunity, human dignity and justice."

No doubt your idea of "Peace in our Time" has a multi-trillion dollar price tag.

"...to hear a King proclaim that our individual freedom is inextricably bound to the freedom of every soul on Earth."

That is not a truism.  It is your personal opinion.  I do not believe in collective salvation or freedom.

Can you find the "Missing Emperor" in the photograph above?

From his Second Inaugural speech:

"Not out of mere charity, but because PEACE IN OUR TIME requires the constant advance of those principles that our common creed describes; tolerance and opportunity, human dignity and justice."

- President Barack Hussein Obama II, on the occasion of his Second Inaurgural


So sayeth The Appeaser, who waived around his piece of paper and proclaimed he has accomplished "peace in our time"!
When Sheila “Weapons Grade Stupid” Jackson-Lee at the Johnson Space Center, “Did the Mars Rover take any images of the flag Neil Armstrong planted on Mars?”, her colleague, Vernon Ehlers, sighed and stated, “We don’t teach enough science in this country.”

With Obama and his “the bomb that fell on Pearl Harbor” and his “Emperor Hirohito forcibly made by Gen Douglas MacArthur to come dressed in tails & a topper to surrender on the deck of the USS Missouri,” one half expects to hear the historically-challenged John “Bluto” Blutarsky ask Obama “Was it over when the Germans bombed Pearl Harbor?”

Boon and I will pull another pint and say:


It’s a sad day when the President of the United States becomes John “Bluto” Blutarsky.

“We don’t teach enough history in this country.” 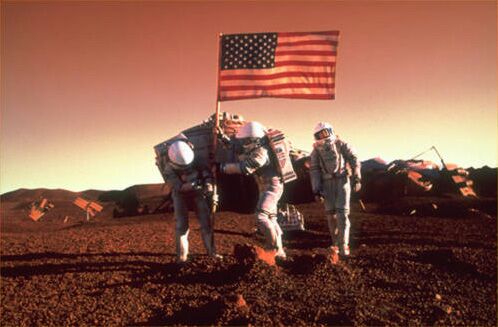