Democrats: Merchants of "Weapons of War" 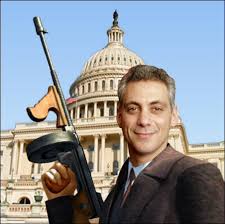 They’re slinging mud about the NRA while investing in Smith and Wesson and Sturm, Ruger.

As a chorus rises from the left in favor of the president’s push for tighter regulations on gun ownership, the requisite political demonization is under way. To that end, some gun-control advocates have pointed out that the firearms industry contributes to the NRA. It’s noteworthy, though, that many members of Congress who favor gun control are also benefactors of said industry. As data from the Center for Responsive Politics show, many leading Democrats get financial gain from gun companies.

Smith and Wesson is the top U.S. manufacturer of revolvers; Sturm, Ruger, and Co., of pistols and rifles. Gun sales are a lucrative business; Yahoo News reports that the industry has a $32 billion economic impact nationwide, up from $19 billion in 2008. That draws investors, including some prominent Democrats.

One example that involves a number of Washingtonians is the financial firm TIAA-CREF, which provides retirement services for the public and nonprofit sectors and manages the accounts of a number of leading Democrats. According to disclosure forms published by the Center for Responsive Politics, Senator Elizabeth Warren (D., Mass.) has money in a TIAA-CREF fund that invests in both gun companies. TIAA-CREF has come under fire (word choice, I know) for investing in both Smith and Wesson and Sturm, Ruger. At the left-leaning website Change.org, a petition with almost 2,000 signatures calls for divestment from the gun companies, and a spokesman for TIAA-CREF declined to comment when Inside Higher Ed asked about the request.

After winning her race, Warren wrote an op-ed for the Bay State Banner on her plans to support the reinstatement of the assault-weapons ban, concluding, “We owe this to all our children.” It’s doubtful whether the companies that help fund Warren’s comfortable retirement account see it the same way.

Rahm Emanuel also appears to have profited from the gun industry. According to his latest available disclosure forms, for calendar year 2009, when he was White House chief of staff, he had up to $15,000 in the JP Morgan Market Expansion Index Fund. That fund is currently a major shareholder in Sturm, Ruger. The Chicago Tribune reported last week that Emanuel has asked Chicago’s city pension funds to examine whether they have investments in assault-weapons companies and, if they do, to divest. He also said he would “lead a charge of mayors across the country urging them to do the same.” When it comes to his own investments, though, it’s clear he may not always have acted according to the same priorities.

Senator Chris Coons (D., Del.), awarded an F by the NRA, has more than $30,000 in the Oppenheimer Main Street Small- and Mid-Cap Fund. That fund is a major shareholder in Smith and Wesson.

Senator Amy Klobuchar (D., Minn.) also supports reinstatement of the assault-weapons ban. Klobuchar’s connection to the gun industry is through her husband, John Bessler, who has up to $50,000 in a Vanguard Small Cap Growth Index fund, which holds 1.15 percent of Sturm, Ruger’s total shares, making it the fund with the eighth-largest share in the company, according to Morningstar.com. Vanguard Group is a major investor in the American gun industry; it’s Smith and Wesson’s top shareholder, controlling 6.39 percent of its shares, and it’s also the third-largest holder of Sturm, Ruger, with 7.03 percent of shares.

While gun-control advocates are slinging mud, suggesting that it’s immoral to support the NRA or have an expansive view of gun rights, it’s important to remember that many Democrats invest in the very industry they’re lambasting lock, stock, and barrel.

— Betsy Woodruff is a William F. Buckley Fellow at the National Review Institute.