Pressing Question Of The Day: Do Juice Boxes Make You Gay? 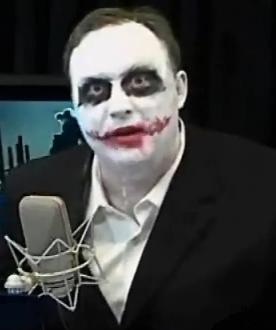 The answer is "Yes!" according to Alex Nutter Jones!!!

From The Puff Host:

We've heard a lot of ridiculous things about where LGBT people come from and what they're capable of (see the slideshow below), but Alex Jones' claim that the government is creating gays with chemicals takes conspiracy theories to a new level.

The InfoWars radio host grabbed the spotlight in recent weeks after slamming CNN's Piers Morgan for making comments against pro-gun advocates and he even went so far as to try to get him deported back to the UK. Now Jones is raising eyebrows again after a series of clips from several years ago began to recirculate on the Internet this week.

In the video he claims:

Jones is also worried about MSG in Kettle Chips and fluoride in spring water.

In another clip he states that troublesome chemicals are seeping into water ways and even turning male frogs into female frogs. Research has shown that chemicals found in common weed killers have been proven to "feminize" male frogs, but it is not clear if the same effects could take place with humans.

While we're still waiting for experts to come up with a definitive answer as to why people are gay or straight (and we may never know), we've never come across anyone -- other than Jones -- who thinks it is due to juice boxes. What do you think?

As I recently wrote with regard to the conspiracy theories being generated about the Newtown Truthers, THIS IS WHY PEOPLE LIKE ALEX JONES SHOULD BE SHUNNED.  IT DOESN'T MATTER IF HE IS CORRECT ON MANY ISSUES.  WHEN HE AND HIS FRIENDS DO STUFF LIKE THIS, THEY MAKE US ALL LOOK LIKE NUTTERS.  Anyone, who goes on his show, should be aware of the fact that they will be tarred with the same moonbattery/asshattery brush.

If there is a conspiracy theory into which Alex Jones hasn't bought into, I'm unaware of it.  I listen to him on occasion so that you, dear reader, don't have to.  Yeppers, that's me.  Saving part of the world from the asininity of Jones one reader at a time; however, if you are the a DIY-type, be prepared...very prepared.

If you read or listen to him, you will see every kind of conspiracy theory discussed that you can imagine from the staged moon landing and the government's alleged destruction of the original Moon (Or was it Mars?  Maybe, we should ask Sheila Jackson-Lee?) landing tapes (How did they get through the Van Allen Radiation Belts?) to the 9/11 truther movement and nanothermite to mind-control through fluoridated water to a "New World Order" plot to depopulate the world population by 90% after which the remaining proles will slave for the elite, who will (through medical technology and organ harvesting -- no doubt through vivisection) turn into some sort of humanoid, computerised lizardmen (OK, I threw in the lizardmen part, but lizardmen are real.  Ask Jones' blood-brotha, David Icke - he is the founder of the lizardman theory movement), who will live forever -- transhumanism -- snacking on the babies of the disgusting humans that are worse than the lowest of cockroaches. (If you have 2:19:30, you can watch Alex Jones' entire opus on this subject, Endgame - Blueprint for Global Enslavement,  here).