"Does It Really Have To Be That High?"

Hit me with your best shot...or maybe not 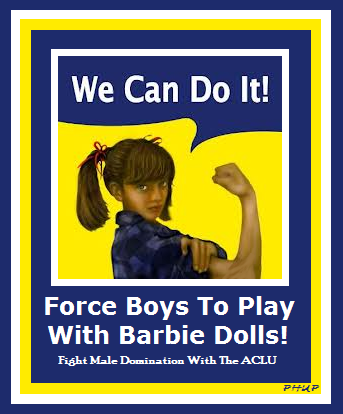 On Thursday, I wrote:

"If women want to serve in combat roles on the front lines, then they should have to meet the same physical strength requirements that men must...and I say this as a woman.  I don't believe that men are superior to women, but I do think that, in most cases, men are stronger than women...

A woman must possess the strength required of a man in combat because the enemy is, generally, as strong as the man.   We’ve come a long way, baby.  That’s true.  Whether we are strong enough to physically fight in combat should be determined by the same standards used to certify men.  If we demand less or special treatment, then we not only have a long way still to go, we should stop it with the taunt that “We can do anything a man can do!”

“What difference does it make” that the military requires women to perform at 80%?  Everything…on the battlefield."

Gen. Martin Dempsey, the chairman of the Joint Chiefs of Staff, said Thursday that with women now eligible to fill combat roles in the military, commanders must justify why any woman might be excluded – and, if women can’t meet any unit’s standard, the Pentagon will ask: “Does it really have to be that high?”

… Dempsey replied: “No, I wouldn’t put it in terms of operations, Jim. What I would say is that, as we look at the requirements for a spectrum of conflict, not just COIN, counterinsurgency, we really need to have standards that apply across all of those.”

He added: “Importantly, though, if we do decide that a particular standard is so high that a woman couldn’t make it, the burden is now on the service to come back and explain to the secretary, why is it that high? Does it really have to be that high? With the direct combat exclusion provision in place, we never had to have that conversation.”

OK...the stupidity of some military commander asking WHY the training standards have to be that high. Effing fools! The US military has been, and especially the USMC, the most serious, motivated, kick-ass warriors ANYWHERE! And now we want to LOWER that? You know what you get when you lower the training standards? HIGHER KIA!