Amazing, Unique, And Plain Weird Buildings From Around The World (Photo Essay) 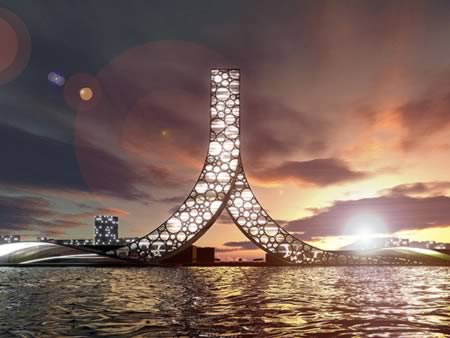 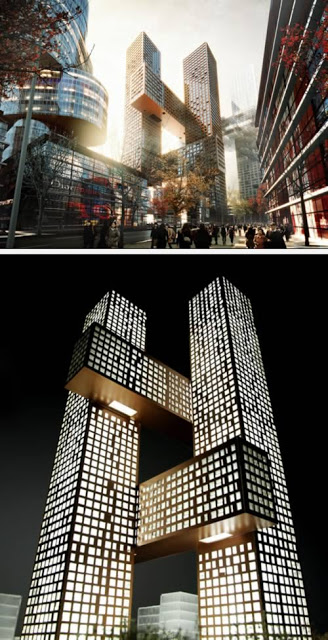 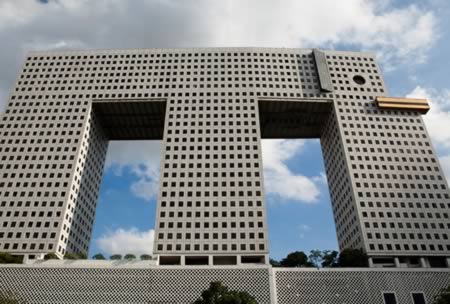 Looming above Bangkok's skyline like a giant Dumbo, this is the Chang building, a thick-legged monster with a porthole for an eye and a pair of tusks more often seen framing the trunk of Thailand's national animal. 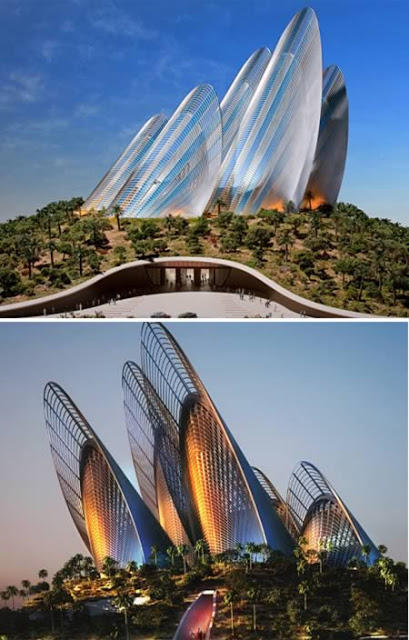 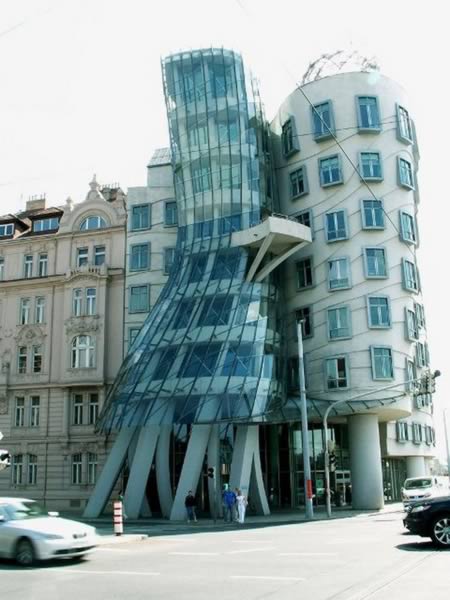 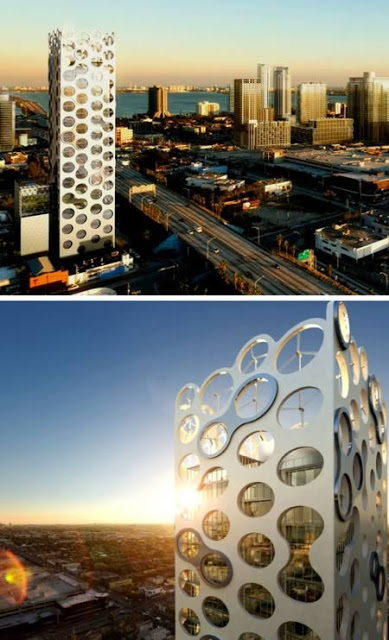 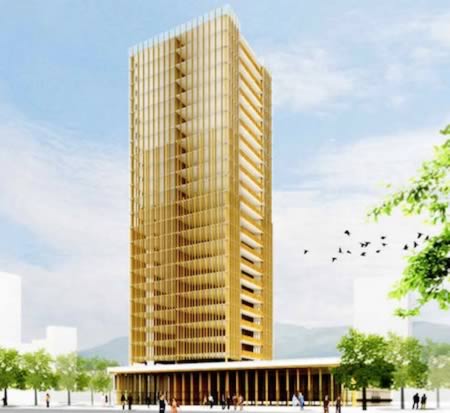 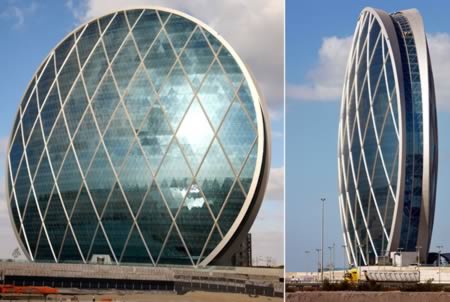 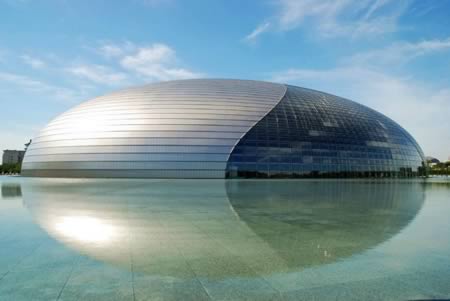 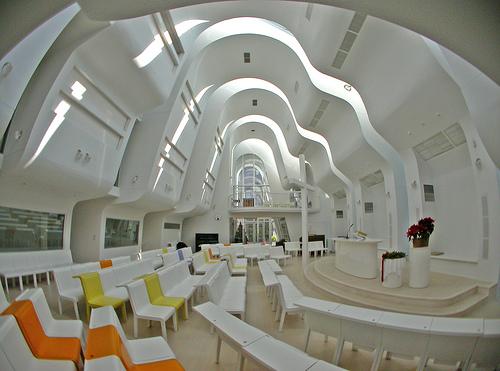 This futuristic protestant church is located in Tokyo and it was first unveiled by the design firm of Ciel Rouge Creation in 2005. The ceiling is specially made to reverberate natural sound for 2 seconds to provide a unique listening experience for worshipers and tourists. 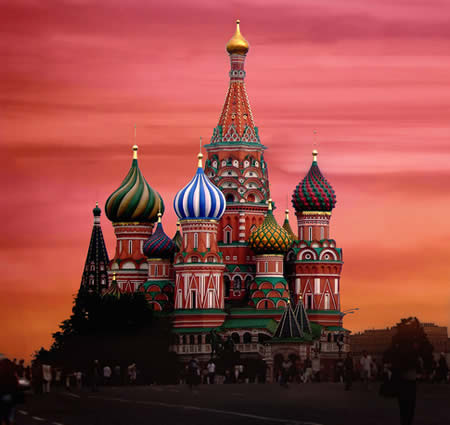 The St. Basil's Cathedral is located on the Red Square in Moscow, Russia. A Russian Orthodox church, the Cathedral sports a series of colorful bulbous domes that taper to a point, aptly named onion domes, that are part of Moscow’s Kremlin skyline.

The cathedral was commissioned by Ivan the Terrible to commemorate the capture of the Khanate of Kazan. In 1588 Tsar Fedor Ivanovich had a chapel added on the eastern side above the grave of Basil Fool for Christ, a Russian Orthodox saint after whom the cathedral was popularly named. 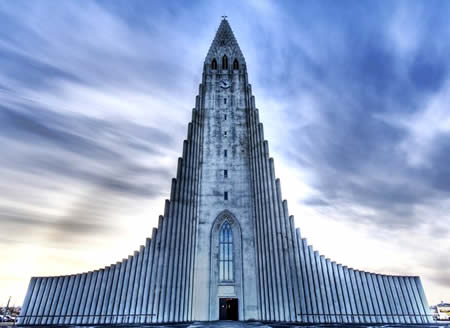 The Hallgrímskirkja (literally, the church of Hallgrímur) is a Lutheran parish church located in Reykjavík, Iceland. At 74.5 metres (244 ft), it is the fourth tallest architectural structure in Iceland. The church is named after the Icelandic poet and clergyman Hallgrímur Pétursson (1614 to 1674), author of the Passion Hymns. State Architect Guðjón Samúelsson's design of the church was commissioned in 1937; it took 38 years to build it. 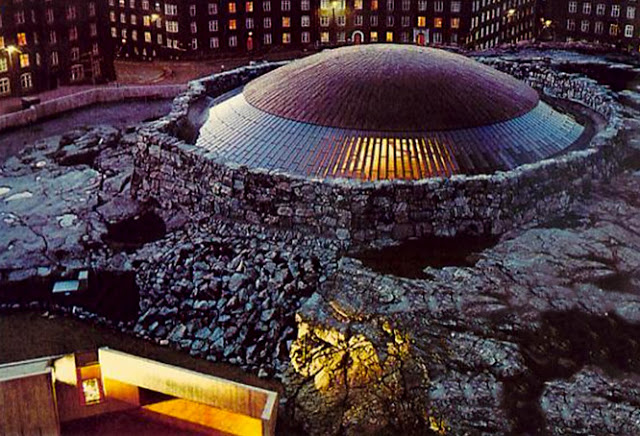 The Temppeliaukio Kirkko (Rock Church) is a thrilling work of modern architecture in Helsinki. Completed in 1952, it is built entirely underground and has a ceiling made of copper wire. It was designed by architect brothers Timo and Tuomo Suomalainen and completed in 1969. They chose a rocky outcrop rising about 40 feet above street level, and blasted out the walls from the inside. It is one of the most popular tourist attractions in Helsinki and frequently full of visitors. 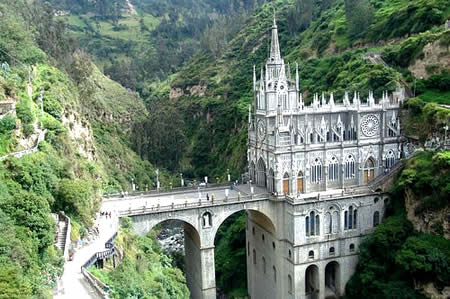 The Las Lajas Cathedral is located in southern Colombia and built in 1916 inside the canyon of the Guaitara River. According to the legend, this was the place where an indian woman named María Mueses de Quiñones was carrying her deaf-mute daughter Rosa on her back near Las Lajas ("The Rocks"). Weary of the climb, the María sat down on a rock when Rosa spoke (for the first time) about an apparition in a cave.

Later on, a mysterious painting of the Virgin Mary carrying a baby was discovered on the wall of the cave. Supposedly, studies of the painting showed no proof of paint or pigments on the rock - instead, when a core sample was taken, it was found that the colors were impregnated in the rock itself to a depth of several feet. Whether true or not, the legend spurred the building of this amazing church. 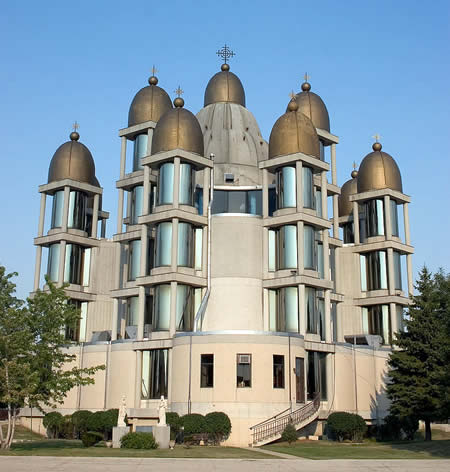 The St. Joseph The Betrothed is an Ukrainian Greek-Catholic Church in Chicago. Built in 1956, it is most known for its ultra-modern thirteen gold domed roof symbolizing the twelve apostles and Jesus Christ as the largest center dome. The interior of the church is completely adorned with byzantine style icons (frescoes). Unfortunately the iconographer was deported back to his homeland before he was able to write the names of all the saints as prescribed by iconographic traditions. 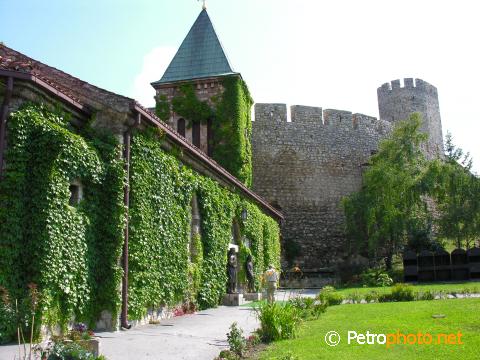 Ružica Church - Where Chandeliers are made of Bullet Shells

Located over the Kalemegdan Fortress in Belgrade, Serbia, the Ružica Church is a small chapel decorated with... with trench art! Its chandeliers are entirely made of spent bullet casing, swords, and cannon parts.

The space the church now occupies was used by the Turks as gunpowder storage for over 100 years and it had to be largely rebuilt in 1920 after WWI. Though damaged by bombings there was an upshot to the terrible carnage of The Great War. While fighting alongside England and the US, Serbian soldiers on the Thessaloniki front took the time to put together these amazing chandeliers. It is one of the world's finest examples of trench art. 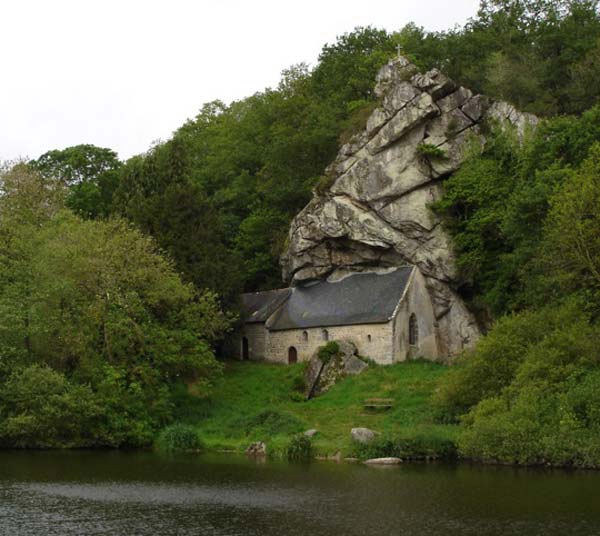 The Chapel of St-Gildas sits upon the bank of the Canal du Blavet in Brittany, France. Built like a stone barn into the base of a bare rocky cliff, this was once a holy place of the Druids. Gildas appears to have travelled widely throughout the Celtic world of Corwall, Wales, Ireland and Scotland. He arrived in Brittany in about AD 540 and is said to have preached Christianity to the people from a rough pulpit, now contained within the chapel. 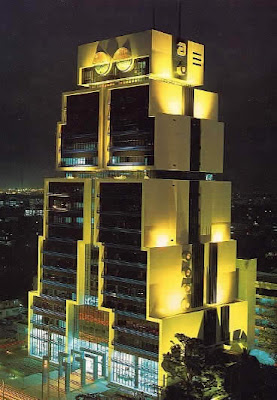 Bangkok's second claim to dubious architectural fame is the "robot" building, actually the United Overseas Bank, a vision of cartoon craziness modelled on a toy robot and dating back to 1986. 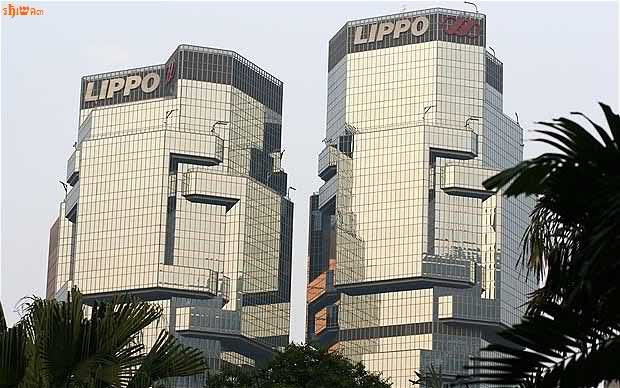 Known as the "koala" building for the bear shapes that hug each tower's circumference was completed in 1988. The uniquely cuddly twin towers are 186m tall and were intended to appear less harsh on the eye than your average skyscraper. 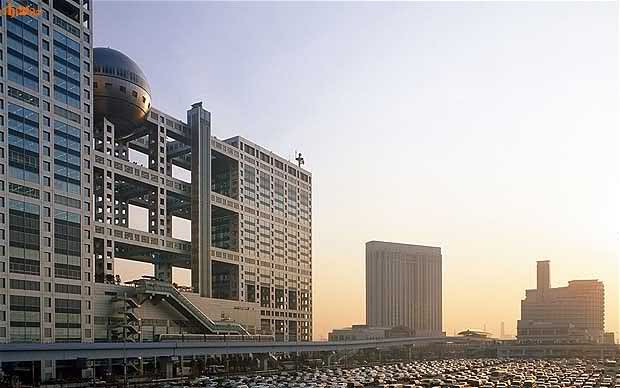 The futuristic shape and silver orb of the Fuji tower in Tokyo could have been lifted from the set of a Seventies' sci-fi film. The sea of cars beneath Fuji Television's headquarters and the night-time lasers only add to the industrial wasteland feel. The 32m wide globe is an observation deck. 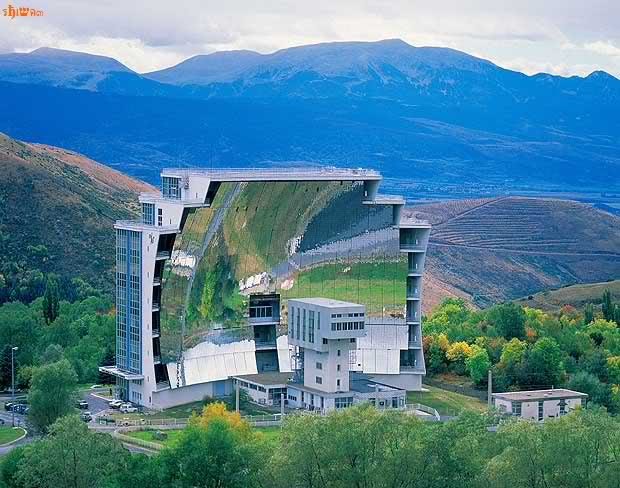 This solar furnace has a curved wall of mirrors that sucks in light to generate heat. The tower's warped reflection of the surrounding French countryside creates a striking image. It is the largest solar furnace in the world and opened in 1970. 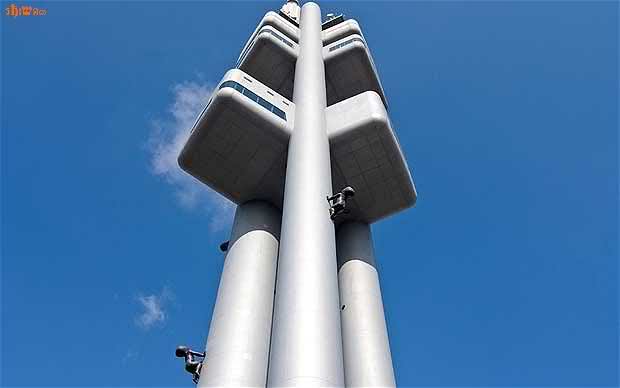 The Zizkov in Prague is one of the most recognisable television towers in the world, thanks to the unnerving black infants crawling up its 216m sides. These babies were created by Czech sculptor David Cerny in 2000, also known for painting a Soviet war memorial tank pink. There are great views of Prague from the top and lifts to take you there. 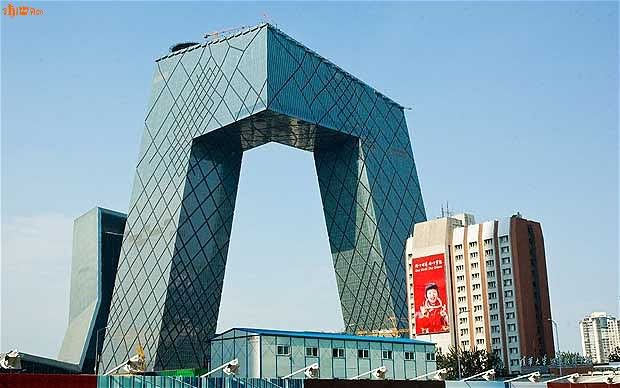 The headquarters of China Central TV in Beijing 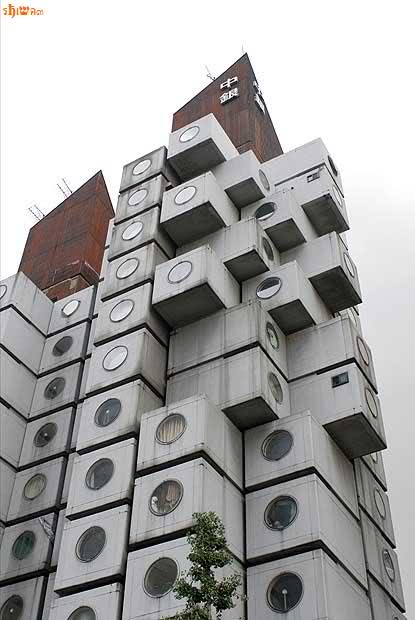 The Nagakin Capsule Tower, part of the Metabolist movement, has 14 storys. The 140 individual capsules were manufactured separately and designed to be replaceable. 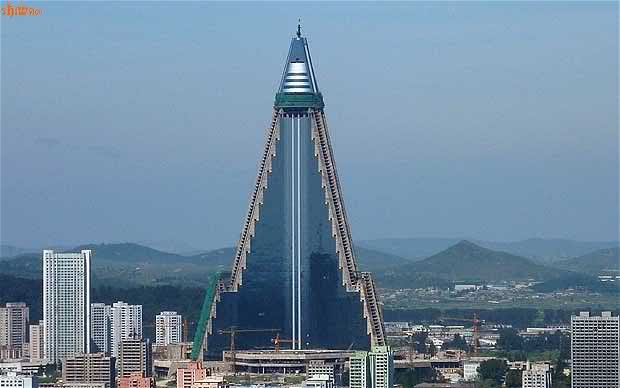 For the last two decades the 330m-high Ryugyong Hotel has been a vacant concrete shell towering over the city of Pyongyang. Construction on what would have been the world's tallest hotel began in 1987 and was due to cost 2 per cent of the country's GDP before economic difficulties set in. But work began again in 2008 and the building has since been given glass panels. It has been estimated that it will cost up to $2 billion to finish. 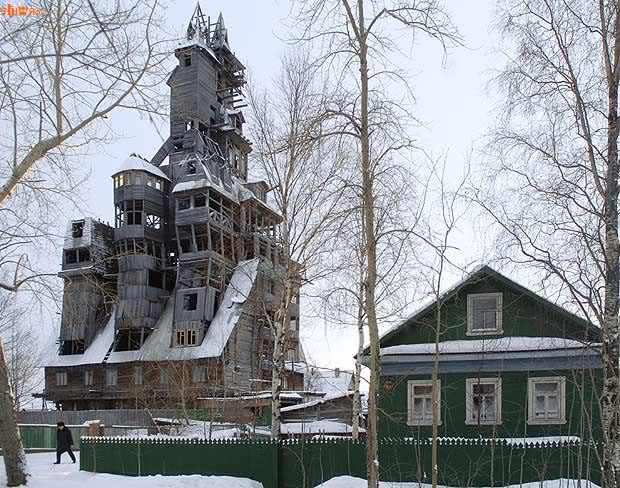 This wooden jumble of rooms and spires looks like it was built without the use of a spirit level. Created by a one-time gangster, this was once the world's tallest wooden house, standing (just) in the Russian town of Arkhangelsk. Nikolai Sutyagin kept adding to the 12-storey house bit by bit, each time feeling that it still didn't look quite right.  After teetering somewhere between completion and disrepair, the house was demolished in 2008.