Stalin, His POW Son, & ‘I Will Not Trade A Field Marshal For A Lieutenant’


Yakov Dzhugashvili was Josef Stalin’s son from his first wife. In July of 1941, he either surrendered to or was captured by the Nazis. He was sent to the Sachsenhausen concentration camp in Oranienburg, Germany.

At one point, the Germans offered to trade Dzhugashvilli for Friedrich Paulus, the German Field Marshal who was captured during the Battle of Stalingrad. Stalin, reportedly said:

‘I will not trade a Field Marshal for a Lieutenant.’

In 1943, at the age of 36, a guard in Sachsenhausen, most likely, put a bullet in Yakov Dzhugashvili’s head for failing to obey orders.  There remains some debate as to whether it was a bullet to the brain or an electric fence, to which Yakov ran.  Flat-out murder or suicide after 2 years of desperation, despair, deprivation, and pain?  That's not the real issue. Either way, he died as a POW, which is a label that the Pentagon refused for five years to put on Bergdahl…and his own father (he was somebody’s child!) refused to make the trade. 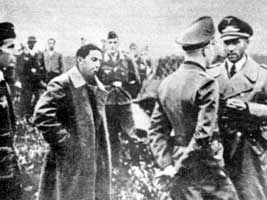 Why is this of any import?

Because many people throughout the years have pointed to Yakov’s death as evidence of Stalin’s coldness, which he certainly was and I am in no way defending the evil bastard, but he did understand that he was:

2) Sending millions of his fellow countrymen to fight and die;

3) Watching millions of Russian civilians be starved and massacred;

4) The leader of his country and military, and as such, he had to put the interests of the nation above his own and those of his son.


He, especially, understood that a trade of a Field Marshal for his son, a Lieutenant, was not a equal trade and he, in effect, would be replenishing Hitler’s military during a time of war when Russians were expending blood, sweat, and treasure.

Well, as much as I loathe Stalin, his ideology, and actions, his position on high-ranking commander swaps for low-level soldier while combat is still ongoing is interesting to consider in light of recent events.  Further, if Stalin realised that he could not make such a deal, which would put a Field Marshal back on the battlefield, why can't some see that it is questionable as to whether we should have traded a Buck Private Sergeant for five 4-star generals while the enemy is still killing our own and, whether we like it or not and whether we decide to unilaterally withdraw/surrender, the Taliban and other Jihadists will continue the fight.  They have refused to renounce terrorism, which was one of the original conditions Obama put on a trade.  They refused.  Barack Obama capitulated.

Since Obama has said that he wouldn’t leave any American soldier behind, I wish someone would ask him:

Rather than the Taliban 5, would you have swapped Malia for Bergdahl?


Yeah, I know that it is a PREPOSTEROUS question (and I made it so intentionally), but if Obama’s principle is that we don’t leave American troops behind, then such a question would tell us exactly how much he means it.

I mean, if the CINC’s position is that we don’t leave any American soldier behind, then there should be no question. Right?

Would the circumstances of Bergdahl’s ‘disappearance’ factor into Obama’s ‘calculus’?

Would Obama have even thought about exchanging Malia for a AWOLer, deserter, defector, and/or collaborator Bergdahl if that was wanted the Taliban had demanded?

And, no one would expect him to make such a trade...

..but one does have to ask, then, is Malia Obama worth more than Bowe Robert Bergdahl? Is she one of those ‘more equal than others’ animals? Is this ‘fair’? Is this ‘equality’?

Further, it does, however, disprove Obama’s contention that ‘we don’t leave Americans behind’ because, obviously, we would if the Taliban demanded Malia Obama.

On the other hand, would he have traded Khalid Sheik-Mohammed for two American soldiers held in captivity and who were actually captured on the battlefield?

Would he trade the mastermind of 9/11, who is responsible for the deaths of 3,000 Americans for those two American soldiers, who did, in fact, serve honourably and with distinction?

After all, he did trade Mullah Norullah Noori, a senior Taliban military commander, who is wanted by the United Nations for possible war crimes, including the murder of thousands of Shiite Muslims and 6,000 men and boys in Mazar-i-Sharif, according to a leaked JTF-GTMO file.

So, are Muslim lives worth less than American ones?

To paraphrase Kanye West, why does Obama hate brown-skinned people?

Many on the Left have argued that those upset about this trade would have 'left an American soldier' behind.  Well, if you like strawmen, there you go.   I haven't ever said that we should have left Bergdahl behind in Afghanistan.  Rather, I have had the following points, problems, issues, and concerns with the trade:

1)  Yes, this country has negotiated with terrorists before, but we have NEVER traded terrorists in exchange for a hostage.

2) Yes, American soldiers and civilians will always be targets for terrorists and others, who seek to harm our nation and/or influence our foreign policy, but it is undeniable that, once we have so publicly demonstrated our willingness to make such lopsided deals, more hostages will be taken.  Indeed, I understand that the Norks took an American today, a former Cuban terrorist is proposing a 1 American-for-3 Cuban terrorists exchange, and the Taliban has said that, not only did Obama give them legitimacy, he incentivised them to take more Americans.

3) Yes, Bergdahl volunteered to put on a uniform and serve his country in a time of war, but he also voluntarily took it off and voluntarily abandoned his brothers-in-arms in a combat zone.  While I certainly want Bergdahl to have every right of due process and presumption before a courts martial, it is, in the words of the 2010 Pentagon report, 'incontrovertible' that he 'walked away' of his own free will and abandoned his country and fellow service members.  No one is denying this.  Some are trying to excuse it and make a victim out of him.  'Swiftboating, full of psychopaths, as much his unit's fault as his, blah, blah, blah.  I'm not calling for him to executed like Eddie Solvik was during WWII, but he sure isn't Sgt York either.

4)  Was Bergdahl, a possible or probable deserter, worth 5 4-star generals?  No.

5) Would Bergdahl have been worth five 4-star generals?  Maybe, but not until hostilities cease.  Would we have traded Goebells, Goring, Himmler, and Hess for one private during WWII?  Of course not.  It would be insanity to replenish Hitler's command while he is still slaughtering our troops.

6)  If the military decided that Bergdahl 'just wasn't worth' risking the lives of special forces, why is he worth five of what Mullah Omar has said is worth 500,000 recruits, i.e., each worth 100,000 jihadis, to put back on the 'terrorfield'?  He wasn't.

7)  As bad as Obama might want to close Gitmo, it is the height of delusion and insanity to put those people back out where they can wage jihad against innocent men, women, and children.

8) Bergdahl was not worth Obama violating his oath and the law.

10) War only ends when either one side secures an victory or both sides agree to end it.  War will never end, as Obama evidently believes, when one side just surrenders and the other continues to fight.