In: The Swivel-Eyed Loon Party. Out: The LibLabCon Party. 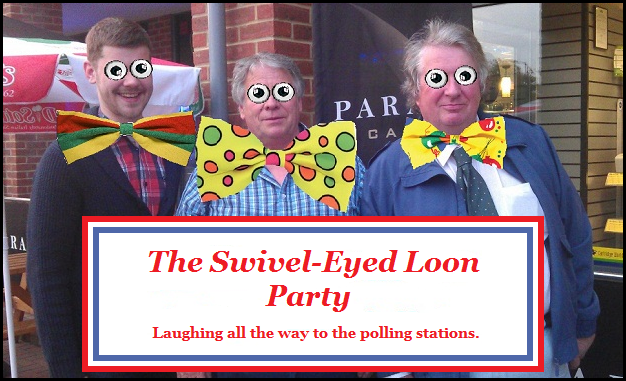 The LibLabCon Party needs the 'Swivel-Eyed Loons' more than the SELs need LLC...and the latter had better realise that PDQ.


UKIP's popularity will continue to grow and it will continue to steal voters from across the spectrum (Don't be fooled: It's not just the Tories defecting) as the ‘ruling elite’ in the LibLabCon Party and their fellow ‘intellectuals’ at The Guardian and broadsheets refer to working and middle-class Brits as ‘swivel-eyed loons, clowns, and racists.’

The LibLabCon Party and the rest of the ruling/intellectual 'betters' treat UKIPpers, working and middle class voters just as the RepubliCrat Party/NYT/WaPo treats the Tea Party. As the 'unwashed masses' continue to revolt, the hateful, snobbish, totalitarian faces of those that believe they were both born and are entitled to rule will be exposed. Things will get very ugly, but there are more of us than them. Further, the far Left groups like RIC in Scotland are proving to be that which they claim of everyone else: Racist, bigoted extremists. Seriously, you have to really be extreme to get castigated by the extremist George Galloway.

No more will unlimited immigration be tolerated. Peter Mandelson, a henchmen of 'New-Old-Labour,' has admitted that UI was a scheme in response to Mrs Thatcher's 3rd victory. Labour planned to 'change the face of Britain forever' and' to rub Tories faces in it.' Any criticism of the policy was considered racist and bigoted...until Gordon Brown met a GE torpedo in the form of lifelong Labourite, Gillian Duffy. Since then, the Milibands & Co have been tripping over themselves making speeches (David, until his recent surrender to his younger brother and retirement) about how the concerns of immigration's burden on social programmes and the tearing of the fabric of society are not racist, but legitimate.

No more will Muffin Cameron & Co's weird and as-disconnected-from-public reality-as-possible obsession with SSM & windmills, along with his and others' vacillations on a referendum on 'Project Europe,' be ignored because, well, it could be worse. They could be Labourites. To paraphrase a famous screaming banshee: 'What difference, at this point, does it make...if they aren't Labour when they might as well be New Labour and loathe their base anyway?'

No more will 'Islamophobia' be considered a bigger threat to the peace and prosperity of 'this blessed plot, this earth, this realm, this England' than the menace posed by Islamofascism, which is as threatening and evil as the blackness of Nazi Germany. 'There are bitter weeds in England' and they are the Anjem Choudarys and Omar Bakri Mohammeds, the evil that they spawn in the form of the Abedolajos and Adebowales, and their apologists, who dare not speak the name of the enemy that we face. These bitter weeds and the political correctness that fertilises them must be ripped out by the root. The willfully blind will be mocked by history.

To paraphrase Churchill, 'even though large tracts of the globe and many old and famous States of Europe have fallen or may fall into the grip of Islamofascists and all the odious apparatus of their extremism, we shall not flag or fail. We shall go on to the end...we shall defend our Island, whatever the cost may be...we shall never surrender.' Even if the Useful Infidels of the LibLabCon Party would.

No more will the working men and women prostrate themselves to the 27 unelected, unaccountable tsars with their legions of apparatchiks in Brussels or the desperados in Strasbourg that will do anything to save - in the words of the German finance minister, Oskar Lafontaine, who launched it - the 'catastrophic currency' of the euro. While some in Britain like Mrs Thatcher were prescient in seeing that the euro would be calamitous and necessarily lead to less democracy, more 'integration,' less tolerance and more prevarication, we, nevertheless, are forced to participate in the bailouts of the profligates in a currency of which we do not share while, even today, there are those that demand 'More Cowbell', er, 'More Europe,' for the UK.

No more will we acquiesce to the demands of the would-be Emperor of the World in Washington, who once apologised and said that 'the United States should not meddle in the affairs of other countries.' Unilaterally, he terminated the 'special relationship' and the middle class - of which he claims to champion while making poorer - in the UK will not be bowed by his threats. Yes, it is true: About 40% of the UK's trade is with the EU, but trade with Asia, Brasil and India are rapidly growing. Mr Obama may think that it would be fatal for the UK to leave the EU, and he will punished it by excluding the UK from his proposed US-European trade agreement, but he overlooks the FACT that the members of the EU need the UK as much, if not more, than they need the US. Germany's biggest global trading partner is Britain. The EMU share of German trade has fallen from 46 per cent to 37 per cent since the launch of the euro, displaced by Britain (and the Anglo-sphere), Asia, as well as Eastern Europe. As for the US, of its top 10 trading partners, only 3 are even in the EU: UK (#5), Germany (#6), and the Netherlands (#9). Mr Obama talks as though the United States is still the only game in town. It's not...and his spending and recklessness are ensuring that it will not again be for a very long time...if ever. His threat that no separate agreement will be negotiated is as menacing as the red lines he draws in the Syrian sand. Besides, the European Parliament and 14 member states don't much like Mr Obama's 'NAFTA for Europe,' as written, either.

No more shall the majority be serfs to the ruling minority, which loathes the former. This shall be true in the UK, in the US, and everywhere else that our self-appointed 'betters' attempt to rule by fiat and without the consent of the governed.

Revenge of the 'Swivel-Eyed Loons'!

The Truth At Last! Peter Mandelson Admits Labour 'Sent Out Search Parties' To Bring Migrants Here After Losing The Votes Of The Working Class

Until Our Leaders Admit The True Nature Of Islamic Extremism, We Will Never Defeat It

Farage: No Wonder Tory Voters Feel Closer To Me. Look At The Stupidity Of Muffin's Priorities: Gay Marriage, Foreign Aid And Wind Farms.

Muffin Ponders: What To Do About Nigel?

Fruitcakes, Loonies, And Closet Racists? Muffin Cameron's Talking About YOU!

Ed Miliband Has Just Given The Worst Speech I've Ever Heard From A Party Leader. He's Running Out Of Time.

The Rise of Islamist Violence in the UK

Cuba Without The Sunshine

In The UK, "Austerity" Means Spending More Than The Socialists In Labour Did...And, Those Bastards Bankrupted The Country

Labour Has Completely Lost The Plot On Philpott