A popular 1926 exhibit from the American Eugenics movement reads:

"Some people are born to be a burden on the rest. Learn about heredity. You can help to correct these conditions."

Five panels are displayed, with flashing lights on them.


The top one is captioned, "This light flashes every 15 seconds. Ever 15 seconds $100 of your money goes for the care of persons with bad heredity such as the insane, feeble-minded, criminals, and other defectives."

Under "America needs less of these," there is a light that flashes every 48 seconds --


"Every 48 seconds a person is born in the United states who will never grow up mentally beyond that stage of a normal 8 year old boy or girl."

And, one that flashes every 50 seconds -

"Every 50 seconds a person is committed to jail in the United States. Very few normal persons ever go to jail."


Under "America needs more of these," there is a light that flashes every 16 seconds -

"Every 16 seconds a person is born in the United States."

And, another that flashes every 7 and a half minutes -

Every 7 1/2 minutes a high grade person is born in the United States who will have ability to do creative work and be fit for leadership. About 4% of all Americans come within this class."


A similar poster from the Yale University's Race Betterment Society bulletin board from in the early 20th century...

Some people are born to be a burden on the rest...and guess who gets to decide who is a burden?

"Society, as the great trustee of life, is responsible to itself for every miscarried life - It also has to pay for such lives:  Consequently, it should prevent them.  In numerous cases, society ought to prevent procreation:  To this end, it may hold in readiness, with regard to descent, rank, or spirit, the most rigorous means of restraint, deprivation of freedom, and, in certain circumstances castration."

- Friedrich Nietzsche, A Will To Power 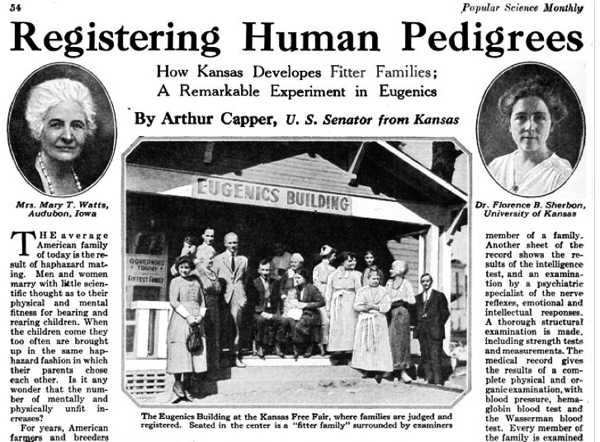 "Encourage the increase of families of good blood, and of discouraging the vicious elements in the cross-bred American civilisation."

"'Race suicide' among the well-to-do classes means that their places will speedily be taken by the unintelligent, uneducated, and inefficient.”

- Irving Fisher, considered to be the greatest American economist of all time,  co-founded the Race Betterment Society; was an active member of the Eugenics Research Association, a group of scholars in the field; and served as founding president of the American Eugenics Society, which organised research, lobbying, and propaganda for the movement.

What were some founding goals of US Eugenics at the turn of the 20th century?

2.  Sterilise 14 million in the US and millions worldwide.

3.  Eradicate the “lowest tenth” until only Nordics left.

Money from the Carnegie Foundation helped fund the Cold Spring Harbour Laboratory in conjunction with the Federal government where data on millions of Americans were catalogued on index cards.  The Rockefeller Foundation helped found the German eugenics programme and even funded the programme that Josef Mengele worked in before he went to Auschwitz.

"Fisher was a leading voice of the eugenics movement, which aimed to improve human populations through carefully controlled breeding. The aim, more precisely, was to build up the white northern European population, and discourage all others. This agenda, as it found its way into state laws, would mean evicting other Americans from their homes, depriving them of the ability to have children, and locking them away in institutions." 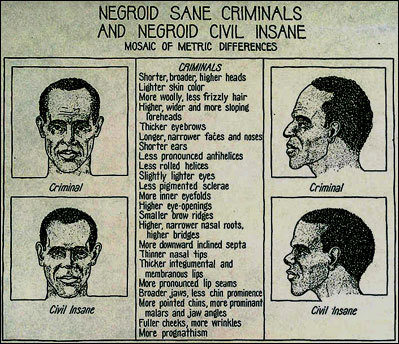 'Carrie Buck, "Three Generations, No Imbeciles, But A Mandate'
'War Against the Weak--Eugenics and America's Campaign to Create a Master Race'
Progressivism, Eugenics, and the Jewish Butcher of Buchenwald
Progressives' Dirty, Little Secret
When It Comes To Abortion, Progressives Can Be Counted On To Fully Reveal Their Racism And Ignorance
'Being A Progressive Means Never Having To Admit That You Were Wrong Or Saying You're Sorry.'
How Progressives Killed Robert Goldstein Through Censorship, Police State Tactics, Unconstitutional Laws, & Railroading All The Way Into A Cattlecar On The Road To A Nazi Concentration Camp
Sterilisation in America
Eugenics And The Nazis — The California Connection
The Left’s Lie About Fascism Will Outlive Cockroaches In A Nuclear Winter
The Nation's Top 50 Progressives… and Socialists and Communists
Killing Babies No Different From Abortion, Experts* Say ... Alternative Title: Leftists Demand The Resurrection of the Nazi Aktion T4 Programme
I Love Abortion....Ban Adoption!
Life Is Not Sacred: Why Killing Someone is Morally Acceptable But Disabling Them Is Immoral
The Left's War on Fertility
Declaring War on Newborns
George Bernard Shaw Favours Euthanasia
Taking Life: Humans