Oradour-sur-Glane: When The Nazis' Guns Fell Silent, This Is What Was Left (Photo Essay) 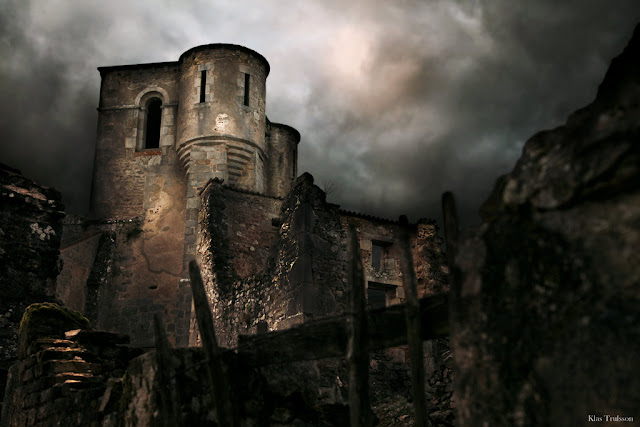 Ruins of Catholic Church in Oradour-sur-Glane

'Down this road, on a summer day in 1944 . . . The soldiers came. Nobody lives here now. They stayed only a few hours. When they had gone, the community which had lived for a thousand years . . . was dead.   This is Oradour-sur-Glane, in France. The day the soldiers came, the people were gathered together. The men were taken to garages and barns, the women and children were led down this road . . . and they were driven . . . into this church. Here, they heard the firing as their men were shot. Then . . . they were killed too. A few weeks later, many of those who had done the killing were themselves dead, in battle.  They never rebuilt Oradour. Its ruins are a memorial. Its martyrdom stands for thousands upon thousands of other martyrdoms in Poland, in Russia, in Burma, in China, in a World at War . . .'

The Catholic Church at Oradour-sur-Glane...BEFORE THE MASSACRE.

On 10 June 1944, four days after D-Day, the Der Führer Regiment of the 2nd SS-Panzer Division Das Reich quartered in south-eastern France, is getting ready to leave for Normandy to fight the Allied landing. On orders of Sturmbannführer Adolf Diekmann, the 4th SS Panzer Grenadier Regiment marched into a small village in the Limousin region of France and slaughtered all of its 642 inhabitants, including women and children.

A typical repast on the bank of a typical river in the oh-so-typical Oradour-sur-Glane...BEFORE THE MASSACRE.

A typical day on a typical street in the typical French village of Oradour-sur-Glane...BEFORE THE MASSACRE.

All the women and children were locked in the church while the village was looted. Meanwhile, the men were led to six barns and sheds where machine guns were already in place. 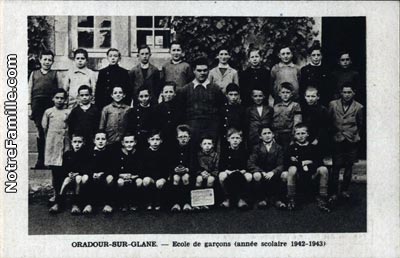 According to the account of a survivor, the soldiers began shooting at them, aiming for their legs so that they would die more slowly. Once the victims were no longer able to move, the soldiers covered their bodies with fuel and set the barns on fire. 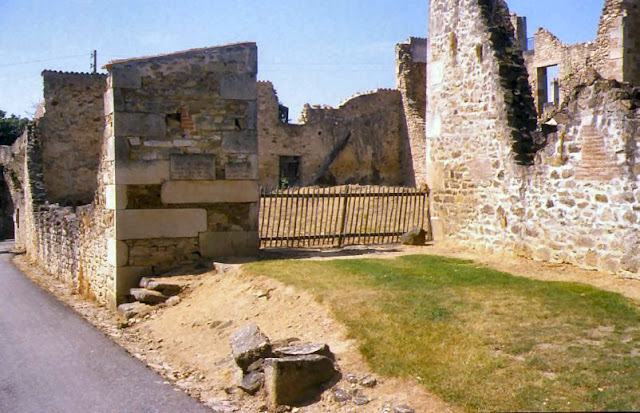 Remants of the Grange Bouchoule, the most isolated of the killing sites in Oradour. 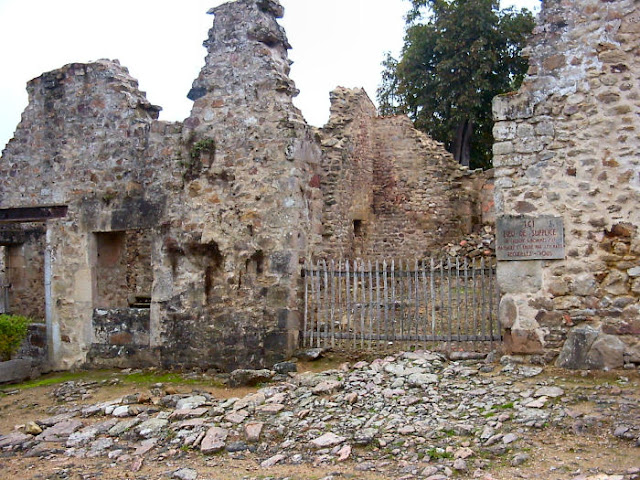 Le Grange Milford:  Opposite the Milord hotel and is the closest of the execution sites to the church. The inscription on the plaque reads:


'Here at this place of torment a group of men were massacred and burnt by Nazis. Collect your thoughts.' 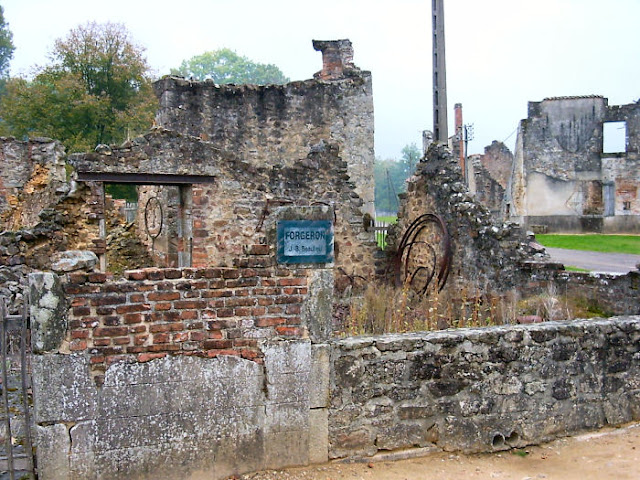 Atelier Beaulieu -The site of 25 executions

The photo above shows two of the survivors searching for the remains of their loved ones in the Beaulieu garage and smithy, one of six locations where the men of the village were shot and their bodies burned.

Only six men escaped; one of them was later seen walking down a road heading for the cemetery and was shot dead. In all, 190 men perished. 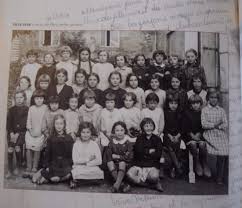 A box of explosives was detonated within the church, but the roof did not collapse as expected. So the SS came in with machine guns and hand grenades to finish the job.  After it was ignited, women and children tried to escape through the doors and windows of the church, but they were met with machine-gun fire. A total of 247 women and 205 children died in the carnage. Again, they spread straw on the bodies of the dead and wounded alike, and set them on fire. The whole church was set ablaze. 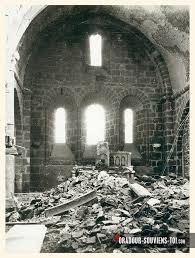 The Church after the massacre 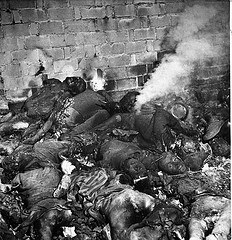 The interior of the church following the massacre

Initially, only two women and one child survived the inferno.  One was 47-year-old Marguerite Rouffanche.  Madame Rouffanche, whose daughter laid dead by her side, clambered over the corpses, seized a step-ladder used to light candles and managed to climb out from a sacristy window, the stained glass of which has been blown off.  She fell three yards, but was otherwise unhurt. She realised she was being followed by another woman, who threw her baby to her through the broken window and jumped in turn.

Bodies from the church.

Bodies of women and children burned in the church.

All three fled, but the infant’s cries attracted the attention of the SS, who mowed them down. The baby and its mother were killed. Madame Rouffanche, with only a bullet wound, crawled away and hid in a garden of pea bushes behind the church. Of the hundreds of women and children locked in the church, she was the sole survivor.  Her husband, her daughter and sons, and her infant grandchild all perished in the massacre.
Madame Rouffanche was wounded and her companions were killed. She remained hidden overnight until she was rescued the following morning by another group of about twenty villagers, who had fled Oradour-sur-Glane as soon as the soldiers had appeared.

Madame Marguerite Rouffanche, the only survivor of the massacre in the church.  She spent over a year convalescing from her five gunshot wounds, but testified at the war crimes trial at Boudeaux in 1954 - two years before she died.  She lost her entire family.

The SS then turned their attention to the thorough looting of the village. In particular, they pillaged the wine store and celebrate this glorious day by emptying bottles of champagne at the sound of  an accordion.  Undoubtedly, one of their stops was the Dépot de vin Denis wine store... They left late that night, after setting whatever remained of the place on fire.  That night, the village was partially razed. They came back two days later to bury bodies in an attempt to at least partially erase the traces of the massacre. 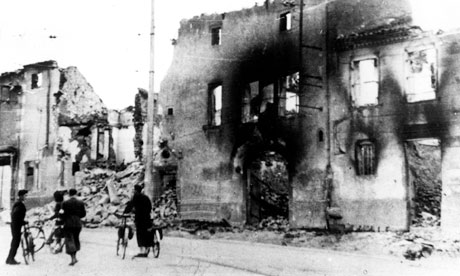 A few days later, survivors were allowed to bury the dead. 642 inhabitants of Oradour-sur-Glane had been murdered in a matter of hours.  They left the village as a memorial to the dead. 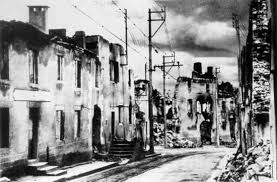 What happened to the murderers? Many, including the commanding officer, were killed in Normandie during the following weeks. Alsatians, who had been forcibly enrolled into the SS, were sentenced to prison terms after World War II, but later pardoned. Obersturmführer Heinz Barth was sentenced to death in absentia by a French Court, but managed to hide in what is then East Germany under a false identity. He was finally caught in 1981, received a life sentence and was paroled in 1997 with a pension as “war victim.”  The strangest turn of all is that some Nazi apologists and other revisionists have claimed that the massacre was fully justified by the presence of Résistance fighters within or near the village.

Two of the survivors of the village removing the ashes of the men, who were murdered in the village. 'Just fate, I did like the others did. Cleverer ones died in it. Its just destiny, nothing heroic at all.' 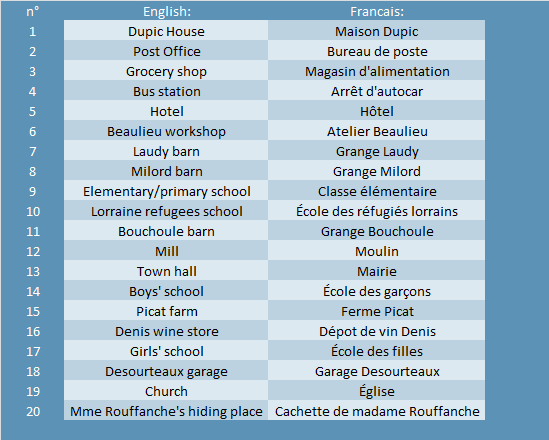 Left As A Monument...

The tools of daily life can be found throughout Oradour-sur-Glane:  Sewing machines, pots, prams, bicycles, lathes, etc.  Left as they were when the Grim Reaper came dressed in the form of a Waffen-Schutzstaffel Stoßtruppen. 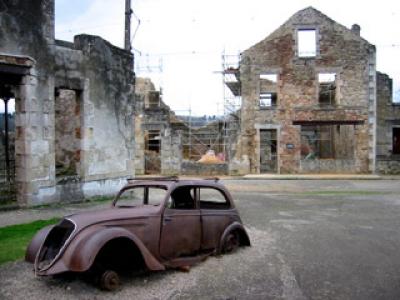 This car belonged to the village's doctor, Médecin Desourteaux, who had been making a housecall at the time of the attack.

Left:  The melted church bell located within the church.  Right:  The remnants of a baby's pram in front of the altar. 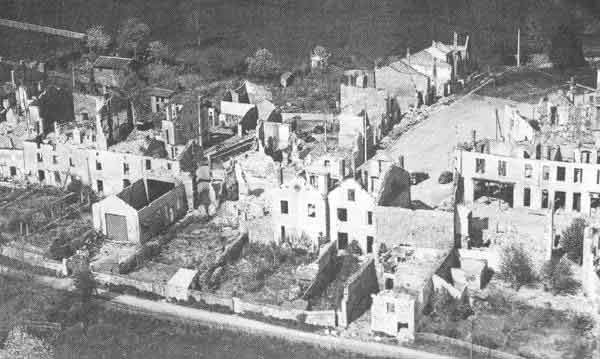 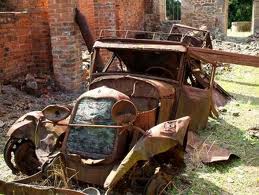 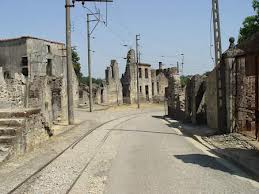 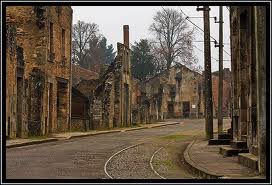 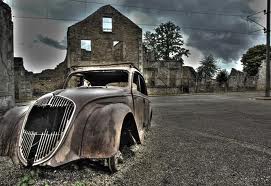 The Three Pinède Children and the 'Friendly' Nazi The figure in the foreground is looking into the remains of the Hotel run by the Avril family on the rue Emil Desourteaux, opposite the junction with the old road from Oradour to St. Junien. It was within this building that the three Pinède children (Jacqueline, Francine and André) hid until they were driven out by smoke and fire later in the afternoon / evening. The rear of this building, where they encountered the SS trooper who let them escape, looks out onto open land: see Village Plan.

For much, more information and photos, please see:   http://www.oradour.info/.

These sites are also good:

But I thought that the German Holocaust was merely a fictional story?

These pictures are unreal. My hope is that we never have a government large and powerful enough to execute these types of atrocities or a people willing to support a government that is large enough to do so. Or is it already too late?

Congratulations on an excellent presentation. Just a minor correction--Madame Rouffanche miraculously
lived to the ripe old age of 91 (she died in 1989).

Thank you for this... I did not know of these people and the horrendous evil perpetrated upon them.

Most people think war is the greatest enemy of humanity. But governments have murdered far more people than wars.

The greatest enemy of the human race is government that is allowed (sometimes even encouraged) to take too much power and so become driven by corruption of mind and soul.

Even the the Nazi's seemed benevolent to many of their supporters.. at first.

As did those who supported Stalin, Mao, Pol Pot...

They all promised utopia and delivered hell.

Thank you for this wonderful presentation. I was aware of this tragedy, having researched it in detail, and my recently-published novel, Wolfsangel, is based on this tragedy:
http://www.amazon.com/Wolfsangel-Liza-Perrat-ebook/dp/B00FKWIY7Y/ref=sr_1_1?s=books&ie=UTF8&qid=1386668993&sr=1-1&keywords=Wolfsangel