Pic of the Day: The Party of Slavery, Secession, and Segregation Returns To Its Racist Roots

Buttons on display all over the convention hall... 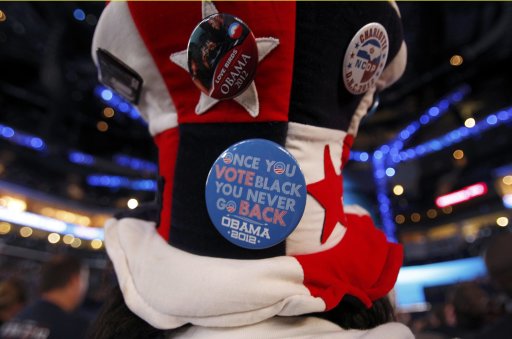 
So, let's see what we have learned from the Party of Slavery, Secession, and Segregation's convention thus far:

“Regardless of where you live, you’re gonna be OWNED BY SOMEONE at some point. I think the American government so far has been a fair government and I don’t necessarily hate that I’m owned by them at this point.” - Delegate to the DNC


2.   People can be "owned" like property.  Dred Scott is spinning in his grave.

3.   "Chicago," "golf," "angry," "experienced," "Food Stamp President," "Constitution," "professor," "kitchen cabinet," "Obamacare," "welfare," "Founding Fathers," "first principles," "Fourth of July," "privileged," etc. are all "code words" for race when Obama's opponents use them and they can make Mr B.O.Tingles have a meltdown on the telly, but the use of a sexually-offencive phrase specifically referring to Barack Obama's skin colour is, ahem, NOT racist when it is used to call FOR his reelection.

4.  The GOP is the "Party of Old, White, Southern, Racist, Christian, Conservative Men" even though:

Republicans boast FIVE minorities as governors or senators -- that means that they have run and won statewide elections:

And should have a SIXTH when Ted Cruz wins a gimme Senate race in Texas.

Democrats have only FOUR:

Of the four, only Patrick has been touted as a possible contender for a future presidential ticket.

5.  Comparing your opponents to Hitler, Goebbels, and Eva Braun is part of the Democrat's NuTone© of Civility and from here on, they should have their hypocrisy and vile words thrown in their faces at every opportunity.

7.  Having a serial adulterer and 5-star general in the War on Women (Broaderrick, Jones, Flowers, Lewinsky, Willey, Stronach, Karimova, etc.) is the perfect way to show how much you care about real American women.  While he is waxing poetically about his presidency and how Obama should be carrying his bags, er, be reelected, we can remember Gloria Steinem's "One Free Grope Rule," which gave support to the notion that a man may:  1)  open-mouth kiss a woman uninvited; 2) fondle a woman's breast without prior consent; and 3) uninvited, take a woman's hand and place it on his genitals; and as long as the man retreats once the woman says "no" that this does not constitute sexual harassment.

My, Big Bubba, What Big Eyes You Have!


"No, I don't think that it is fair that [corporations] make that many profits."

"We should tax corporate losses.  [In response to the interviewer saying "I don't think that we should go that far and actually force corporations to lose money"] Yes, I think so."

"[In response to the statement "Corporations have profits and I want to ban those profits so that workers can have higher wages and that the consumers can get lower prices"] That is something that I would obviously be in favour."

"[In response to the question "What do you think happens with corporate profits?"] Um, they keep it and they get bigger and bigger.  ["I know, I know.  They squeeze the people.  They exploit their customers.  They gouge them with high prices.  Take away those profits."]  Exactly."

"[In response to the question "Can they just fire people to make a bigger profit?"] Absolutely not.  ["Oh, so you want to control who they can hire..."]  Regulate it.  I'm a part of a labour union."

"[In response to the question "Would you support it if President Obama came out in favour of a law to ban corporate profits?"] Yes."

"If you're talking about just pure profit ["Yeah, the stuff that is just left over for the greedy capitalists"] I could, I can actually support that."

"[In response to the question "What about putting a cap on corporate profits?"] I think so.  I think that a cap is the way to go.  That is something that we looked at with our corporate giveaways in Louisiana.  We couldn't get folks to come to the table.  It's our right. Our appeals on those people, um, we were able to get them to cap."  - Congressman Cedric Richmond (D-LA)

"I would be in favour of a Federal law to limit corporate profits."

"[In response to the statement "I don't believe that one person should be able to make $100 million in one year and just keep all of that money."] I tend to agree with you."

"[In response to the statement "There should be a limit as to how much profit corporations can earn."] Absolutely...and individual CEO caps, as well.  Caps in general."

"[In response to the question "How about a cap on profits?"], I could agree with that.

"[In response to the question "Would you be in favour of a law banning corporate profits?"] Of course."

"My concern is education of children and families and working women and single parents.  ["Oh, absolutely.  Me, too, but would you be willing to pay for that by banning corporate profits?"]  I'm not going to make an opinion on that because I don't know enough about it.  ["But, what if Obama wanted to do it?  Would you support him?"]  I will support anything my President wants to do.  ["Anything?"]  Anything."

"[In response to the question "Would you support a new Federal law to ban corporate profits?"] Give me a second to think about that.  I would like to put a cap on it.  ["So, a cap meaning that there is a certain amount of money and they can't make more than that?"]  Absolutely."

"[In response to the question "Would you support putting a cap on corporate profits so that one corporation would not be able to make too much money?"] Yes, I think that is a good idea."

"[In response to "I want to get the Democrats to put in their platform an official ban on corporate profits.  Would you be behind that?"]  Well, I'm not a member of the platform committee, so, unfortunately, the time has passed for your input to be put into the platform.  ["But, would you be in favour of something like that?"]  Well, that's something that I would have to consider."

"[In response to the statement "Those corporations want their profits, but we need the money, the people.  We deserve that money.  I mean, we do the hard work.  We do all of the shopping.  Right?"] That is true. ["Without the consumer, there is no profits."]  That is also true.  ["We need to demand our fair share of the pie."]  Also true.  ["Well, you're a good Democrat.  Thank you."]  Thank you."


Boy, I can't wait to see what they do next.  It's like the Star Wars bar scene.