What Obama's critique of Ryan tells us about Obama's budget plans.


Democrats in Charlotte are pounding away at the savage budget cuts that Mitt Romney and Paul Ryan supposedly favor and their phantom plan for "raising taxes on the middle class," as President Obama puts it. The truth is the opposite, but table that for a moment. The President seems not to realize his critique is really a scorching if implicit indictment of his own time in office.

Think about his logic like this: Mr. Ryan's House budget details a long-range plan to equalize spending and tax revenues without—ahem—raising tax rates. But if such fiscal restraint is as deep and draconian as Mr. Obama claims, then as a matter of arithmetic the White House must favor a tax increase of an equal size, or something close to it, in order to pay for the amount of government he wants to sustain.


The nearby chart dramatizes this reality. It shows the accumulation of outstanding debt as a share of the economy in the modern era. This is debt held by the public—the kind the country has to pay back to bond investors, and not the IOUs that one part of the government owes to another part. These debt projections are highly speculative, and faster economic growth would do a great deal to mitigate them. But we offer them to help readers compare the Ryan and Obama budget visions. 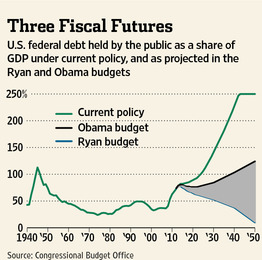 For reference, the top line shows the Congressional Budget Office's "alternative fiscal scenario," which it considers the most realistic prediction if current tax and spending policies continue. In that model, debt grows two times as large as GDP by 2037 and the economy crashes. Not good.

Barely better is Mr. Obama's 2013 budget, which is the second line from the top. The White House purports to "stabilize" the deficit and therefore the debt boom over the next decade. After four consecutive $1 trillion-plus deficits and a more than 70% leap in publicly held debt since Mr. Obama's inauguration, that's a pretty modest goal.

But even discounting the usual accounting gimmicks that the White House uses to show this "stability," check out the fine print. There, the document concedes that beyond 2022 "the fiscal position gradually deteriorates" and the deficit "continues to rise for the next 75 years, and the publicly held debt is also projected to rise persistently relative to GDP." In other words, Mr. Obama's budget does not change the spending and debt trajectory.

Even in this best-case scenario by Mr. Obama's own lights, debt soon exceeds the 112.7% debt-to-GDP high-water mark in 1945, incurred to win a war for civilization across the world. The U.S. would now be taking on a larger liability—well above the 90% ratio that most economists consider the general boundary between safety and crisis—simply because the political class refused to modernize the entitlement state that drives the debt.

Mr. Ryan's budget, as shown by the third line, would gradually reduce debt by 36% relative to the status quo by the end of the decade, by 59% in 2030 and 80% less by 2040. No question that requires reforms that by conventional political standards are large. But that's because they're commensurate with the magnitude of the fiscal problem.

Mr. Ryan's major contribution has been to expose the illusion that Mr. Obama's re-election campaign rests on: pretending that raising taxes on a few thousand "millionaires and billionaires" can fund an ever-growing government.

The shaded wedge represents the smallest possible tax increase Mr. Obama would need to achieve the same fiscal balance as Mr. Ryan—except that, in his budget, spending would be at a quarter of the economy and climbing fast. And that's by the White House's own most optimistic projections. The reality will be far messier.

Every time Mr. Obama warns about Mr. Ryan "gutting" this or that "investment," what he's not saying but is unavoidably implying is that taxes must be far higher to finance this spending. Assuming he can read the budget tables, he knows the government has made promises it cannot mathematically keep—but he hopes nobody notices.


Mr. Ryan had an instructive colloquy with Tim Geithner on this point in February. The Budget Chairman noted that the Administration doesn't "have a plan to make good" on the promises the political class has made to voters. The Treasury Secretary replied that "As I said, we're not disagreeing in that sense. I made it absolutely clear that what our budget does is get our deficit down to a sustainable path over the budget window."


Mr. Ryan: "And then it takes off." Mr. Geithner: "Let's ask ourselves why they take off again. Why do they do that?" Mr. Ryan: "Because we have 10,000 people retiring every day and health-care costs going up."

Mr. Geithner: "That's right. . . . We're not coming before you to say we have a definitive solution to our long-term problem. What we do know is that we don't like yours."

The only omission in Mr. Geithner's remarkable candor is that Democrats do have a plan, kind of. As debt continues to build, at some point U.S. creditors will lose confidence in the Treasury's ability to repay. Then Democrats and even some Republicans will impose a European-style value-added tax or another money machine to appease the bond markets.

What voters should know is that this taxing big bang won't only hit the affluent. Far from it. For evidence, consult a recent study by Eric Toder, Jim Nunns and Joseph Rosenberg of the Tax Policy Center. We know this Brookings-Urban Institute shop has credibility with liberals, because it is the source of the fiction that the Romney-Ryan team wants to boost middle-class taxes.

The researchers looked at how high income-tax rates would have to rise in the top two or even three tax brackets to lower debt to sustainable levels under something akin to CBO's alternative fiscal scenario. They conclude that even if the top rates hit 100%, the budget "cannot achieve the debt-reduction targets in some or any of the target years." Though conceding that near-total confiscation is "completely unrealistic," they report the results anyway "to indicate the infeasibility of achieving a high debt-reduction target simply by increasing top individual income tax rates." And this is from economists who favor higher taxes.


Another way of putting it is that the rich aren't nearly rich enough to finance Mr. Obama's spending ambitions. Sooner rather than later, Washington will come for the middle class, because that's where the real money is.

Another thing Mr. Obama likes to say is that Messrs. Romney and Ryan "know their economic plan is not popular." Perhaps he can read minds, but at least they have a plan they're willing to put before voters. The President knows that voters won't like his, which is why he isn't honest about it.

A version of this article appeared September 6, 2012, on page A16 in the U.S. edition of The Wall Street Journal, with the headline: Desperately Seeking Middle-Class Taxes.

Now my advice for those who die
Declare the pennies on your eyes
'Cause I'm the taxman, yeah, I'm the taxman
And you're working for no one but me.
Posted by Sophie Ro, PHUP at 8.9.12