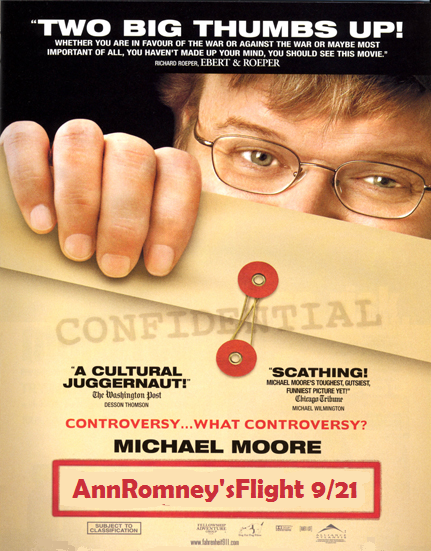 Progs claim that it was a “Romney false-flag operation” in combination with his earlier released tax information, which showed that unlike progressive “Patriotic ‘President Obama, Please Raise My Taxes’ Millionaires,” he didn’t need a law to force him to pay more than he owed in taxes, to generate sympathy for his wife and "de-Lizardmanise" him.

Michael Moore is in discussions with Miramax to produce a documentary to be entitled “AnnRomney’sFlight 9/21″ and release it before the election.  Promises to “really blow the lid off of this whole damn thing!”


"Romney contradicted a July interview in which he said that he should be disqualified from being president if he ever paid more taxes than he owed."

Are you sure you want to go down that road because, technically, he didn’t pay them until he filed his actual return. Isn’t that what you guys said earlier? So, when he made that statement, he had yet to pay more than he owed.  But, if you guys want to go down the road of keeping candidates strictly to their word…

"If I don’t have this done in three years, then there’s going to be a one-term proposition.”

Never mind.  I guess you're right. Americans are more upset by the fact that Romney paid more in taxes than he was obligated to rather than the fact that Obama failed to turn the economy around in 3 years.