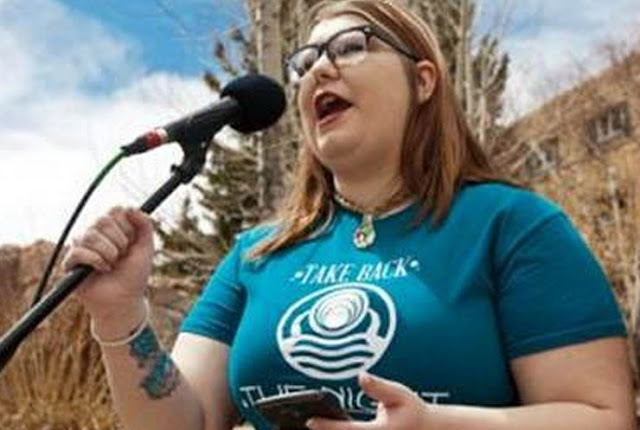 
When last we checked in on Think Progress award-winning blogger Meg Lanker-Simons, the progressive feminist was charged with making a fake Facebook threat to “hate-f*ck” herself. Now it turns out that “Meg Lanker-Simons” is the alias of a dangerously crazy criminal formerly known as Meghan Michelena, who in 2006 pleaded guilty to aggravated assault after getting fired from a Wyoming radio station:

According to court records, she was charged in November 2005 in District Court with aggravated assault.

Lanker-Simons, then Meghan Michelena, pleaded guilty to the charge in May 2006 as part of a plea agreement, records indicate. . . .

Lanker-Simons walked into an Albany County radio station she’d been fired from with a Glock 22 .40 caliber handgun.

She confronted a man who had decided to terminate her, the affidavit reports. The man also told her, the court documents state, that she would not be rehired.

Lanker-Simons “pulled a semi-automatic pistol from her purse, waved the firearm around and pointed (the) firearm at (the man),” according to the affidavit.

She was sentenced to six years of probation in July 2006.

The probation sentence was subject to numerous stipulations, including . . . undergoing counseling . . .

Court documents state she violated probation by being “unsuccessfully discharged” from a residential treatment program.

In April 2007, she was again sentenced to probation with the stipulation she complete a treatment program in Utah.

Uh, “counseling” and “residential treatment program” — do these terms sound to you like legal euphemisms for a trip to the nuthouse?

In 2012, Lanker-Simons’ blog Cognitive Dissonance, which has since been taken down, won an “honoree” award from the liberal group Think Progress for “live blogging the entire GOP primaries.”

Lanker-Simons was also in the news in 2010 when she was a plaintiff in a successful lawsuit against UW after it retracted its invitation to have Bill Ayers speak on campus.

According to a Facebook page that apparently belongs to Lanker-Simons she is a member of the University of Wyoming Gender & Women’s Studies group as well as the school’s chapter of The Nonviolent Communist.

“Nonviolent,” not so much.

It would be wrong to generalize from the example of Meghan Michelina (a/k/a Meg Lanker-Simons) to conclude that all progressive bloggers are in need of a “residential treatment program.”

Nor would it be fair to suggest that all Women’s Studies majors are potentially dangerous gun-wielding lunatics.

However, I would suggest, as atypical as Michelina/Lanker-Simons may be, on a scatter-chart of progressive feminist bloggers, her particular dot is not really that far from the main cluster.

She is the visible tip of a vast submerged iceberg of craziness.

Not every feminist is a criminal or a psychopath, and if every progressive blogger were locked up in the nuthouse, the burden on our mental-health system might prevent adequate treatment for genuinely crazy people who haven’t yet discovered the Internet.

"However, I would suggest, as atypical as Michelina/Lanker-Simons may be, on a scatter-chart of progressive feminist bloggers, her particular dot is not really that far from the main cluster."