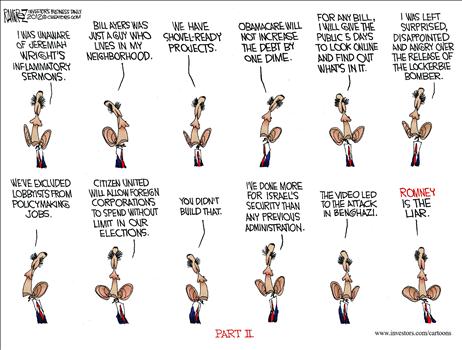 On Friday, a CNN reporter asked Hillary Clinton what she was doing as the attack occurred, and Clinton responded with a 400-word answer that avoided the question.

Here was the colloquy:
QUESTION: … COULD YOU TELL US A LITTLE BIT ABOUT WHAT YOU WERE DOING WHEN THAT ATTACK ACTUALLY HAPPENED?  I know Charlene Lamb, who as the State Department official, was mentioning that she back here in Washington was monitoring electronically from that post what was happening in real time. Could you tell us what you were doing? Were you watching? Were you talking with the President? Any details about that, please.

SECRETARY CLINTON: … I THINK THAT IT IS VERY IMPORTANT TO RECOGNISE THAT WE HAVE AN INVESTIGATION GOING ON. [Blah, blah for 222 words]. So that’s what an investigative process is designed to do: to try to sort through all of the information, some of it contradictory and conflicting. [Blah, blah for 76 words]. So I’m going to be, as I have been from the very beginning, cooperating fully with the investigations that are ongoing, because nobody wants to know more about what happened and why than I do. And I think I’ll leave it at that.

QUESTION:   MRS SECRETARY, IF YOU COULD, THE QUESTIONS WAS –

SECRETARY CLINTON:  I KNOW, BUT I'M GOING TO LEAVE IT AT THAT.

Later on Friday, the State Department spokesperson was asked why Clinton hadn’t answered, and provided this response:

"As you know, she’s not that interested in focusing on herself. But obviously, SHE WAS HERE VERY LATE THAT NIGHT.  SHE WAS GETTING REGULAR UPDATES FROM THE DS COMMAND CENTRE AND THE SENIOR NEA LEADERSHIP IN THE BUILDING, SHE WAS MAKING PHONE CALLS TO SENIOR PEOPLE, and so she was obviously very much involved. But I think she was not interested in sort of giving a personal tick-tock. It’s not the way she operates. [Emphasis added]."

So, we are supposed to believe that Charlene Lamb, who followed the attack in real time on video/telephone from the Command Centre, didn't tell Hillary that it was a terrorist attack and Hillary didn't tell Obama before standing next to him in the Rose Garden when he made his first address to the nation? 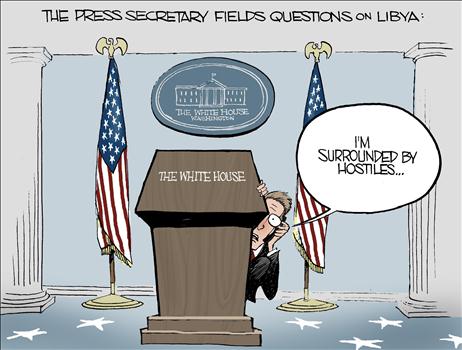 "Let me be perfectly clear:  As most Americans know, Hillary Rodham Clinton has balls.  Big balls.  Big, big balls.  Oh, and a HUGE stick.  My VP may have said that he knows that I have a big stick, but he's wrong.  I'm nothing more than a big, fat, pink, Code-Pink-vajayjay.

One last thing, I want you to listen to me.  I'm going to say this again, I am not a crook nor a liar. I never told anybody to lie, not a single time -- never.   These allegations are false. I am just an incompetent vajayjay, who will never ever evah accept responsibility for anything, and since Bill humiliated Hill and she survived, I figure she can manage it again.

And, you wimmins out there, I know that you might be a little peeved about my throwing a woe-as-me-man under the bus, but just remember that I gave you free contraception so vote like your lady parts depend on it.  If you could compartmentalise Bubba's lies to a point where you were willing to exchange BJs for his remaining in office since he would keep abortion "safe, legal and rare," just remember that I support 4th term abortions!

And, now, this muffin needs to go back to work for the American people. Thank you.”