For a certain segment of the Ron Paul fanbase, no evidence of his disseminating hateful, paranoid material will ever be enough. Citing James Kirchick's piece in The New Republic wasn't sufficient, because Kirchick could have just been "making everything up." Then, when I and others posted copies of  "The Ron Paul Political Report Special Issue on Race Terrorism," that too wasn't convincing.

"Proof that he said/endorsed racist things? Hardly. Doing it repeatedly in one document isn't enough to prove that he did it. Now, if there were many documents..."

Well, now there are many documents. Over fifty. Right here.

Reasonable fans of Dr. Paul now must accept that:


There's no way Paul could have been ignorant of the content [of] 8-12 page newsletters published under his name for over ten years. Paul supporters face three losing propositions:


Further, you can't dismiss this in the name of higher political or socioeconomic aspirations. Since Paul has no chance of winning — seriously, no chance at all — his only value is as a voice, a conduit for principles. And if your only hope is to change the discourse by amplifying ideas, you can do that via many voices and avenues.

"...when you opt to support anti-imperialist and civil liberties ideals by supporting Paul the Candidate, you end up supporting everything else about him. That includes those newsletters and the unambiguous message to those who enjoy them: You can write these things and succeed; this works. The other good ideas to which he's signatory can't erase the fact that he put his name to those words printed above. The moral weight of those newsletters drags down even the most high-minded aspirations he has about civil liberties, and everything crashes down on all of us."


It's fine to have convictions about things he believes in. But when you voluntarily whitewash his record or choose to ignore it and champion him anyway, you are complicit in supporting the idea that racism and homophobia are morally inconsequential to the process of running for President of the United States. And, while many Paul supporters consider racism a social injury subordinate to extra-legal military conflict, there are just as many who disgustingly handwave at racism because it's an inconsequential burp on the way to more tax cuts, Free Markets, Free Money, Free Black Peop — stuff for me!


And still, for the faithful, this will not be enough.


Below, I've tried to give helpful general (bold) titles to each excerpt of the various Ron Paul newsletters available. These come courtesy of a zipfile of scans sent to me by reader Heresiarch, who, along with others, compiled it from various sources back in 2008. I have omitted the over 65 pages of scanned federal earmarks Ron Paul requested for his district, in a fit of States' Wants pique. I have also omitted the scans of Von Mises Institute brochures about a Secession Conference at which Paul spoke.


No attempt has been made to organize these via topic, since pages of each newsletter are apt to feature mini-articles on multiple topics, making organization futile. (My summaries don't indicate all that go on in the scans, so please click away.) Finally, below some of the scans, I've offered some comments in plain text. Those within quotation marks are direct quotes from the text appearing in the newsletter scans. Those without quotation marks are my own observations.


(Open each image in a new tab to embiggen.)

Remember to try yoga.  It is really helpful in battling the PDTs:  Pauliac Delirium Tremens. 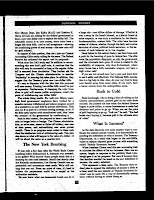 "Whether it was a setup by the Israeli Mossad, as a Jewish friend of mine suspects, or was truly a retaliation by the Islamic fundamentalists, matters little. The cities have become centers of violence, whether through the daily and routine terrorism of crime, political bomb terrorism, or the terrorism of mob behavior as in Los Angeles." 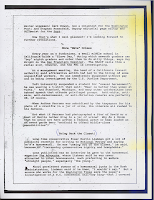 "And Stanford, Michigan, and many other universities have banned speech that offends privileged groups. Anti-white, anti-male, anti-heterosexual or anti-Christian remarks are perfectly OK, of course." You can imagine, then, what a relief it must be to minorities, homosexuals, women and non-Christians to find themselves the privileged people of America. The rest of this page and part of the second details a cabal of homosexuals in the Bush administration who like to lead "the young" astray. 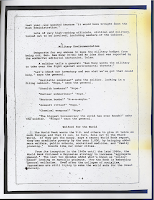 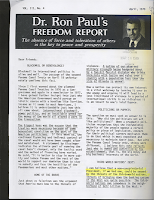 This is instructive because, if someone else was writing Ron Paul's newsletters for him, they've been doing it for 33 years, with a remarkable tonal consistency. Even in 1978, the patterns of paranoia about American government capture by international secret interests are apparent. To wit, "I can believe that a non-conspiratorial President, if we had one...." 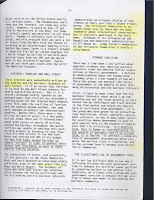 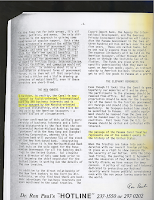 "I believe, in reality, the [Panama] Canal is now "owned" by facist-oriented [sic], international banking and business interests and is merely managed by the Marxist-oriented Torrijos dictatorship, with the bills being paid by the American taxpayers...."