Now you're in New York
These streets will make you feel brand new
Big lights will inspire you
Let's hear it for New York, New York,
New York 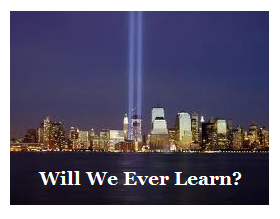 This was the statement from the Embassy...unanswered by the Administration for nearly 9 hours:

"The Embassy of the United States in Cairo condemns the continuing efforts by misguided individuals to hurt the religious feelings of Muslims -- as we condemn efforts to offend believers of all religions.  Today, the 11th anniversary of the September 11, 2001 terrorist attacks on the United States, Americans are honoring our patriots and those who serve our nation as the fitting response to the enemies of democracy. Respect for religious beliefs is a cornerstone of American democracy. We firmly reject the actions by those who abuse the universal right of free speech to hurt the religious beliefs of others."

The Egyptian government knew that the attacks were planned for 9/11. There was no organic uprising because of a movie. That's BS.

The attack on our sovereign soil was an act of war. We owed no one an apology.

Our embassy and consulate are sovereign territory. We don't apologise to those that attack it. We do not apologise for Americans exercising their First Amendment rights of free speech. What's next, my Useful Infidel, will you apologise for our SSM laws and women drivers? Should we have blasphemy laws? Will they apply to those that mock only Islam or will Christianity and Judaism be included?

Do not apologise for those that engage in acts of war, terrorism, and murder.


Because its freedom or surrender.... 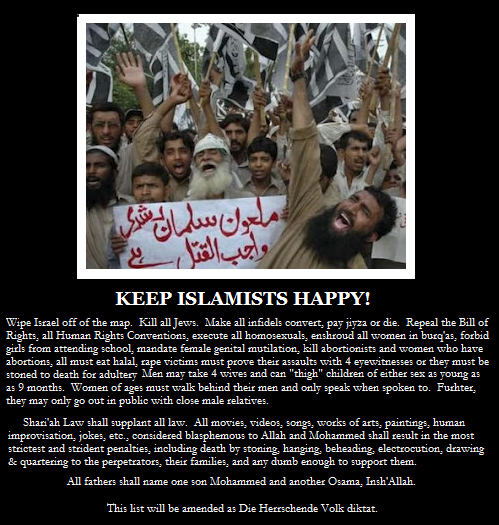 Yea I'm out that Brooklyn, now I'm down in TriBeCa
right next to Deniro, but I'll be hood forever
I'm the new Sinatra, and... since I made it here
I can make it anywhere, yea, they love me everywhere
I used to cop in Harlem, all of my Dominicano's
right there up on Broadway, pull me back to that McDonald's
Took it to my stashbox, 560 State St.
catch me in the kitchen like a Simmons with them Pastry's
Cruisin' down 8th St., off white Lexus
drivin' so slow, but BK is from Texas
Me, I'm out that Bed-Stuy, home of that boy Biggie
now I live on Billboard and I brought my boys with me
Say what's up to Ty-Ty, still sippin' mai tai's
sittin' courtside, Knicks & Nets give me high five
Nigga I be Spike'd out, I could trip a referee
Tell by my attitude that I'm most definitely from....

[Chorus: Alicia Keys]
New York, concrete jungle where dreams are made of
There's nothin' you can't do
Now you're in New York
These streets will make you feel brand new
Big lights will inspire you
Let's hear it for New York, New York,
New York

[Verse 2: Jay-Z]
Catch me at the X with OG at a Yankee game
Shit, I made the Yankee hat more famous then a Yankee can
You should know I bleed blue, but I ain't a Crip though
but I got a gang of niggas walkin' with my clique though
Welcome to the melting pot, corners where we sellin' rock
Afrika Bambataa shit, home of the hip-hop
Yellow cab, gypsy cab, dollar cab, holla back
for foreigners it ain't for, they act like they forgot how to act
8 million stories, out there in it naked
City, it's a pity, half of y'all won't make it
Me, I got a plug, Special Ed "I Got It Made"
If Jeezy's payin' LeBron, I'm payin' Dwyane Wade
Three dice cee-lo, three Card Monty
Labor Day Parade, rest in peace Bob Marley
Statue of Liberty, long live the World Trade
Long live the King yo, I'm from the Empire State that's

[Verse 3: Jay-Z]
Lights is blinding, girls need blinders
so they can step out of bounds quick, the sidelines is
lined with casualties, who sip to life casually
then gradually become worse, don't bite the apple eve
Caught up in the in-crowd, now you're in style
Anna Wintour gets cold, in Vogue with your skin out
City of sin, it's a pity on the wind
Good girls gone bad, the city's filled with them
Mami took a bus trip, now she got her bust out
Everybody ride her, just like a bus route
Hail Mary to the city, you're a virgin
And Jesus can't save you, life starts when the church end
Came here for school, graduated to the high life
Ball players, rap stars, addicted to the limelight
MDMA got you feelin' like a champion
The city never sleeps, better slip you an Ambien

[Bridge: Alicia Keys]
One hand in the air for the big city
Street lights, big dreams, all lookin' pretty
No place in the world that could compare
Put your lighters in the air
Everybody say "yeah, yeah, yeah, yeah"

Why were there no DevilDogs on the embassy roof with mini-guns and sniper rifles to clean off the top of that fence? Touch my flag, you DIE! Just that simple!