Baghdad Jay Strikes Again! The Unrest In The Middle East Is ***NOT*** The Result Of Some Stupid Film And There Were Warnings. Here's The Proof....


Um ba ba be
Um ba ba be
De day da
Ee day da - that's o.k.
It's the terror of knowing
What the world is about
Watching some good friends
Screaming 'Let me out'

Turned away from it all like a blind man

"Well, as you know, we, um, are very vigilant around anniversaries like 09.11.  The President is always briefed and brought up to speed about all of the precautions being taken, but let's be clear:  This, these protests were in reaction to a video that had spread to the region....We have no information to suggest that it was a pre-planned attack.  The unrest we have seen around the region has been in reaction to a video that Muslims, many Muslims, find offencive and, while the violence is, um, reprehensible and unjustified, it is not a reaction to the 09.11 anniversary that we know of or to U.S. policy."

Liar, liar, you and your 3 Hilary Rosens are on fire! 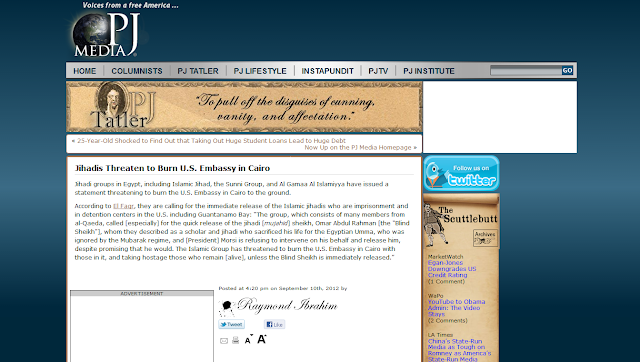 Jihadi groups in Egypt, including Islamic Jihad, the Sunni Group, and Al Gamaa Al Islamiyya have issued a statement threatening to burn the U.S. Embassy in Cairo to the ground.

According to El Fagr, they are calling for the immediate release of the Islamic jihadis who are imprisonment and in detention centers in the U.S. including Guantanamo Bay: “The group, which consists of many members from al-Qaeda, called [especially] for the quick release of the jihadi [mujahid] sheikh, Omar Abdul Rahman [the "Blind Sheikh"], whom they described as a scholar and jihadi who sacrificed his life for the Egyptian Umma, who was ignored by the Mubarak regime, and [President] Morsi is refusing to intervene on his behalf and release him, despite promising that he would. The Islamic Group has threatened to burn the U.S. Embassy in Cairo with those in it, and taking hostage those who remain [alive], unless the Blind Sheikh is immediately released.”

Here's what was in the Islamic press that PJ Media learned and the Smart Power Administration© run by the Smartest Man in the History of the  Entire Universe, as well as his coterie of Useful Infidels, could have learned had they deigned for a moment to stop patting themselves on the back, hanging out with Beyonce, and micromanaging Americans lives (As an aside, weren't these the same people who once told us to never trust "the man," i.e. the government, or anyone over 30?):

NOTICE THE DATE:  THE EIGHTH OF SEPTEMBER, 3 DAYS BEFORE THE ATTACK.  ALSO, THERE IS NO MENTION OF ANY MOVIE.


If you had been paying attention to what Mr Morsi, the Muslim Brotherhood, Al-Gama'a al-Islamiyya, and others have been saying for a very long time, you would know that they want Obama to release Omar Abdel-Rahman, the so-called "Blind Sheikh."  Morsi spoke about the matter as a candidate, as President-elect, and as President.  He has discussed the issue with President Obama. In fact, Obama and Hillary have allowed one of the Blind Sheikh's top associates in the terrorist Gema'a al-Islamiyaa organisation, Noor Eldin, to enter into our country and discuss a possible release with their subordinates.

THIS HAS NOTHING TO DO WITH A STUPID MOVIE. WE MUST STOP MAKING EXCUSES FOR THE BARBARIC BEHAVIOUR OF RADICALS.


I just have one question for Obama, Clinton, and the rest of the appeasing Useful Infidels:

How'd that whole 'OK, Herr Hitler, you can keep Austria and the Sudetenland as long as you promise not to invade anymore countries" work out for Poland, Luxembourg, Holland, Belgium, France, Greece, Britain, etc?

The idea that the Islamists will cease with their demands if we 1) ban all material and speech "offencive" to Islam; 2) ban all material and speech that hurts the feelings of Muslims; 3) behead all those associated with the "offencive" movie; 4) leave Iraq and Afghanistan; 5) abandon Israel; and 6) "Let there be light:  Blind Sheikh, go forth and enjoy your freedom in the sun!", then I am determined to out Sanger, Margaret Sanger.   All Useful Infidels should be forcibly sterilised.  They are simply too stupid to seed and multiply.

(Anyone, who has ever read my posts or articles on Carrie Buck and the ATROCIOUS policies of the Progressives concerning forced sterilisations knows that I'm being facetious here; however, Supreme Court Justice Robert H. Jackson once said, "The Constitution is not a suicide pact."

As Chief Justice Oliver Wendell Holmes said -- most incorrectly on the facts in Buck v Bell, "Three generations of imbeciles are enough."  Aren't three generations of Blame America Firsters and America Haters enough?  Do we really need any more...especially teaching your children?

(A semi ~~wink, wink~~ is in order here.  Part of me wants to invest millions in sterilisations or Planned Parenthood lifetime gift certificates; provided, they are used solely by white Progressives).


Are films that offend Muslims only worthy of a Presidential denouncement, Federal investigation, and hand-wringing by the Nattering Nabobs of Newspeak when they are made by Christians, who can't buy Obama's protection?

The Muslim Brotherhood in Egypt, especially the Salafists, had planned the protest on Cairo for weeks. The stated reason was simple: RELEASE THE BLIND SHEIKH.

I am not in the intelligence community nor employed by the government, BUT I KNEW ABOUT THE PROTEST BEFORE IT HAPPENED

The Saturday before the protest, 8 September 2012, the protest planners had aired a snippet of the video on a show hosted by Sheikh Khalid Abdallah, a firebrand extremist, on the Salafist television station Al-Nas, which is owned by a Saudi media group. Al-Nas has been regularly described as a channel known for ‘promoting religious or sectarian hatred.’ It was thusly labelled by the Mubarak government and was and has been described as such by governments, organisations, and those that cover Egyptian news for years.

EVEN THOUGH THIS ‘VILE, DESPICABLE, AND DISGUSTING’ VIDEO WAS AIRED ON SATURDAY, 8 SEPTEMBER 2012, THERE WERE NO PROTESTS OR OUTRAGES ON THAT DAY, SUNDAY, OR MONDAY. Just ‘coincidentally’ the crowd that was already planning on protesting at the American Embassy in Cairo on 11 September 2012 to demand the release of the Blind Sheikh ‘spontaneously protested’ and expressed their ‘outrage’ over the ‘youtube video’ ONLY on the day they were ALREADY planning a protest.

The Egyptian government was aware of the planned protest days before the video was ever aired on television and notified the US government.

The video NEVER had ANYTHING to do with what happened in Benghazi. Furthermore, it is a demonstrable LIE that there were ‘protests happening at American embassies and other installations over the youtube video’ on 11 September 2012. The protests that spread around the world did NOT happen until AFTER Benghazi took place and the US government set out to rend its garments over the constitutionally-protected speech of Nakoula Basseley Nakoula. Indeed, the administration sought its censorship and was denied. Then, it had Nakoula arrested in the middle of the night by 10 Federal agents, perp-walked, and thrown in solitary confinement in a Federal detention centre on a probation violation, without bail, where he would remain until his court date: THE DAY AFTER THE AMERICAN PRESIDENTIAL ELECTION. He is still in jail.

I laid out all of this not long after Benghazi with the links where the information was available BEFORE 11 September 2012.