The Republican Party And Loyalty Oaths 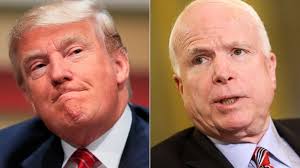 A response to Jonah Goldberg...

Listen, I have no use for Donald Trump, but, frankly, I'm unimpressed with the idea of pledging loyalty to the GOP absolutely, under any circumstances, forever, etc. My problem, you see, is this sort of thing only goes one way. It is easy to get upset with Trump for not pledging his fealty to the Republican Party. Why? It is said that, if one is a Republican, Then. S/he. Must. Support. The. And. Vote. For. The. Party's. Nominee. Period.
But, how does that work when the loyalty shoe is put on the GOPe's foot? Must I really cite the myriad of examples or can I just offer up the Party's 2008 presidential nominee as wholly and clearly illustrative?
In July of 2013, the aging, bombastic, insulting, insincere, go-along-to-get-along a/k/a 'crossing the aisle' a/k/a complete surrender and capitulation to the Democrats Senator from the Great State of Arizona, one John Sidney McCain III, was asked by the lefty mag, The New Republic, for whom would he vote in 2016 if the presidential contest was between Hillary Clinton and Rand Paul.
And, what did the alleged 'Reagan Republican' stalwart and one of the so-called leaders of the GOP in Washington say in response?

'It’s gonna be a tough choice.'

Wait. Wut??? Where's the loyalty? If one is a true Republican - in fact so much a Republican that he was given the Republican nomination for President - how could one ever contemplate voting for the disingenuous, corrupt, 'bimbo'-bashing (#WarOnWomen, indeed), achievement-less, disastrous Progressive, Hillary Rodham Clinton, who was to the left of Barack Obama on many issues while in the Senate?
If the establishment believes that all candidates must pledge all-encompassing loyalty to the party and 'get behind' the eventual nominee, then why does that only seem to apply to upstarts like (the buffoonish) Trump and (the brilliant) Cruz? In other words, why shouldn't Senator McCain be forced to pledge to support the eventual nominee? No. Matter. What.
I admit that I am not now nor have I ever been a Republican (but I am certainly not a Democrat, Liberal or Progressive, but I repeat myself). The Party has the absolute right to set its own rules and demands, but shouldn't those, in the very least, be consistent?
I am not a Trump supporter although I do like people who take it to the Establishment. This whole loyalty oath brouhaha is emblematic of one of the Republican Party's core problems: You will vote for our moderate candidate, who will always choose pale pastels over bold colours. You will continue to support us when we betray you. (Remember our promises to limit the size and scope of government, cut taxes, reduce regulation, defund Obamacare and never fund 'President Obama's illegal and unconstitutional amnesty'? Well, never mind. Keep cutting those cheques!)
And, that is exactly how we wind up with people like McCain, McConnell, Boehner, etc. All hat and no cattle. Seriously, the bloody Iranians are better negotiators than Boehner and Putin has a spine where the Majority Leader is just another spineless, chinless, DC Corruptocrat, who buckles under as soon as the bullies, Obama and Reid, hurl their opening salvos. They are weak and, frankly, very different from their bases. They love Big Government...especially when they supposedly control the levers of power...and even as they cede more and more of that power to the Executive Branch...and the fourth branch of government, The Regulatory State.
Recently, I heard a clip from a hearing of the Senate Armed Services Committee wherein Senator Ted Cruz, in my opinion, completely eviscerated Secretary of State John Kerry, Secretary of Energy Ernest Moniz, and Secretary of Defence Ashton Carter over President Obama's insanely reckless and delusional nuclear agreement with the Iranian government, who are fanatical and apocalyptic.

Contrary to Obama's vile, crass, and, frankly, un-American assertion that, if one objects to his beautiful deal (that rests almost exclusively on the bet that, in a decade, the Iranian government will have moderated), s/he is making 'common cause' with the hardliners in Iran, it is precisely the opposite. I hate to break it to you, Mr President, but the hardliners in Iran ARE the 'Supreme Leader' (as you insist on calling him) and the government. The moderates - those with whom many of us, who oppose the Iranian deal, stood - were the ones getting shot in the street in 2009 during the Green Revolution. President Obama turned his back on the 'moderates' then. Out of ideology, a personal preference for dictators over democrats, or political expediency (‘I cannot piss off the hardliners 'cuz...my legacy!), who knows?
Anyhoo, during this colloquy, Kerry asserted that he has never seen anything from either the 'Supreme Leader' or the Iranian government that indicates a real desire to 'wipe Israel off the map or destroy the United States'. Seriously.
Only days before, the Ayatollah Khamenei, as he has done for decades, led a frenzied crowd in chanting 'Death to America! Death to Israel!' while holding a Kalashnikov. And, the supposedly 'moderate' President of Iran, Hassan Rouhani, has explicitly stated in the past that he and his co-religionists would be willing to sacrifice TWENTY MILLION of their OWN countrymen in a nuclear exchange with Israel if such resulted in the destruction of the Jewish State and its 6 million Jews (and 2 million Arabs).  As Senator Chuck Schumer said in his eloquent essay on why he is voting against Obama’s nuclear sell-out ‘agreement’, this deal is premised on the idea and ideal that treating Iran as an equal, letting it back into the ‘community of nations’, and introducing Western ideas into Iranian society through an opening of markets will result in either moderation or regime change is a bet that is almost certainly not going to pay off.  I’m paraphrasing him here, but as hard as it is to say, when he is right, he is right.
It is really indisputable – except to ideologues, sycophants, and antiwar organisations like Code Pink, who do, in fact, constantly make ‘common cause’ with the anti-Semitic, anti-American, Holocaust-denying regime in Iran – that the moderates and real democrats in that country are the very ones that had as much input into this ‘historic accord’ as did Israel, which is to say, NONE.
Sixty – SIXTY! – percent (60%) of Iran’s population of 73 million is under the age of 30.  They have made it clear that they do not want to live under theocratic rule.  They are the people that should be encouraged and enabled. Providing a path to nukes to the country’s nutters in government doesn’t just present an existential threat to Israel and the world, it crushes the moderates further under the iron fist of the 12th’ers, who want nothing more than to impose Islam on the entire world and to bring about the return of the Mahdi through bloodshed and chaos.  Don’t take my word for it.  Go read the ‘Supreme Leader’s’ book that was published days after President Obama’s 'great gift to America, Israel and the freedom-loving world.'
So, in light of the quite obvious reality with regard to Iran, the nuclear deal, and his own hawkish national security positions, one would believe that Senator McCain would have been silently cheering on Senator Ted Cruz as he deftly and expertly interrogated Kerry, Carter, and Muniz. (There's a reason that the liberal Alan Dershowitz has said that Cruz was his most brilliant student in 50 years and why he won 9 cases before the Supreme Court). But, of course, we are talking about John McCain. So, instead of supporting or, at least, remaining silent during Cruz's time, the self-proclaimed 'Reagan Republican', John McCain, came to the rescue of his old buddy, Lurch Kerry, and cut off Cruz.
This is EXACTLY what you get when your party requires absolute loyalty under any circumstance, but refuses to be loyal to you, their constituents. With the GOP, there's always another hill to die on...Obamacare, immigration, the IRS, the budget, debt/deficits, taxes, regulations, and even the funding of Planned Butcherhood is just not that hill. Impeachment and using the power of the purse have been taken off the table so the Republicans have no leverage.

If the country's Constitution, sovereignty, national defence, and unborn aren't 'hills to die on', then, perhaps, the Republican Party just isn't that in to you. Further, I would suggest, that you not continue to submit to the GOP Establishment's loyalty demands.

'I didn't leave the Democratic Party. The Democratic Party left me,' Ronald Reagan once said. Perhaps, it is time for the 'Hobbits and Whacko-Birds' of the Republican Party to tell the Establishment, loudly, clearly, and once and for all, that:

After another Bush loses to another Clinton and cements permanently the 'fundamental transformation' of the United States of America into something that would have, in generations past, resulted in citizens taking up arms against their elitist rulers?

We owe ourselves, our children, and generations unborn a better country led by better leaders.

Trump isn't that guy, but neither is any spawn of the Bush-Dole-Romney wing of the Republican Party and the Washington Cartel.

PS: If you think that I am unduly pessimistic, ‘extremist’, ‘warmongering’, and ‘partisan’ in my contempt for the Iranian nuclear deal, then let me disabuse you of that notion summarily and forthwith.  I need only one example to prove to how naïve and delusional that President Obama, Secretary Kerry, and all of their colleagues and supporters. While President Obama grudgingly was forced to admit that Iran ‘might’ use some of the billions of dollars gained as a result of sanctions’ relief, he asserted that the Iranian government will definitely use most of the money on ‘paying government pensions and repairing crumbling infrastructure.’  I. Am. Not. Kidding.

Do you know what happened immediately after the deal was announced?

Did Soleimani travel to Russia to get advice on pension funding and infrastructure remediation from Vladimir Putin?

No, he was sent at the behest of the ‘Supreme Leader’ to secure an arms deal.

So, just exactly who is the delusional, naïve, extreme, and reckless one here?