A Special Message To Those Jeep Manufacturers In Ohio

The Goddess of Democracy stands in Tienanmen Square.   She shines in the light of Beijing spring.  And from the universities.   Many hundred thousand strong.  Young people speaking out. As one, 50 days in the square,﻿ we dissent. We dare to defy our government.  Here, we stay!  Come what may!   Ccause the risk is our burden to bear in Tienanmen Square. We must be free now! 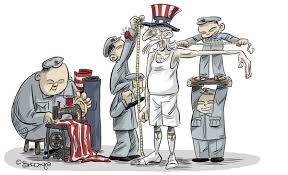 Can't wait for those Jeeps that would have been manufactured in Ohio to be built in China for local sale so that Jeep will not have to pay the steep tariff.  To remain competitive, it was either build Jeeps in China or let you build them, export the vehicles into China and eat into its profit margin.  We know what the 99%ers and union thugs would have said for Jeep to do!:

Keep the jobs in America.  Build Jeep in the land of her Birth.  Either promote it as a luxury automobile purchase worth the 25% tariff or eat the tariff yourselves.

Now, as a capitalist, I say, "Move to China!  Don't pay the 25% tariff.  Pay workers $1.00 plus per hour per employee in China.  Sounds like a plan to me, but don't wrap yourself in the American flag while doing it.  In case anyone hasn't noticed lately, you're an Italian company."

"Sergio Marchionne has said Jeep has the best opportunity among all of Chrysler’s brands to succeed globally. Fiat, which is working on a production plan for Europe to account for the region’s slumping demand, said today that it will build a small Jeep in Italy for export beginning in 2014.  The Jeep, which wasn’t identified by name, is a new model for Europe and the U.S. that isn’t currently in production, according to a Fiat presentation.


While it is true that since its bankruptcy in 2009, Chrysler has announced about $4.2 billion in investments for Jeep models and plants that produce them in Detroit; Belvidere, Illinois; and Toledo, Ohio. The three investments will add about 5,700 jobs combined by next year, Marchionne wrote in his message to employees.


While that investment and the job additions (if the figures are truly correct) are indeed nice, it doesn't change the fact that Fiat will be making a Jeep model in Italy which could have been made here. If the company continues to choose Italy or any other locale outside the U.S. for Jeeps to export to America, older models made in the U.S. will gradually move through their product life cycle. If they're not replaced with newer models, at some point U.S. production will end up coming down and the need for the entire cast of current U.S. workers will diminish.

Can't wait for those new model Jeeps to be built in Italy for export to Europe and North America.  Jeeps that would have been built in Ohio will now be built in Northern Italy.  But, don't fear, UAW!  Marchionne, CEO of Fiat, said that older model Jeeps will continued to be manufactured in Ohio...until they are phased out.

I'm sure that you will have lots of work to do until that is, of course, you don't.  Oops!

But, a funny thing happened on the way past the Roman Coliseum between the promises made prior to the election and, well, now.   It seems that Fiat is not really much concerned about the UAW or its retiree health-care trust.  Instead, it's main goal is getting its Italian manufacturing and sales stoking, especially in Europe.  The concerns of the UAW are being fed to the lions.

The UAW has the choice of pushing the Chrysler stock public, but we've seen what has happened to GM stock since its big IPO.  Look out below!!!!

That's what you get for giving an American auto company $10s billion of dollar BEFORE managed bankruptcy only to BEGGED an Italian company to take it for NOTING.

UMW is dead and the UAW is on its last legs (GM earnings down 14% last quarter!)

Per Gallup, 57% of Americans will not buy a car from a company that was bailed-out by the Fed govt.  Yes, I am looking at you GM & Chrysler!

One for Billy Jeff...


"I saw the reports of Governor Romney's latest ad saying that the president had allowed Jeep to move to China... And so this morning, before he left Florida and went back to Washington, he said, 'You know, of all the things Governor Romney has said that probably hurts my feelings the most.' He said, 'You know, I never had any money when I was a kid. and the first new car I ever owned I was 30 years old it was a Jeep.'"

THERE'S NO CRYING IN POLITICS, especially about a Jeep, which you bought when you were 39 years-old, NOT 30!!!!

One of you is all about Pussy and the other is ALL Pussy. ALL.OF.THE.TIME!

Excellent post, bet the UAW didn't see that one coming.