Heartbreaking: A 6 Year-Old Boy & Dogs Wait For Their Daddy, Cpl Nathan Cirillo, To Come Home, But He Never Will... 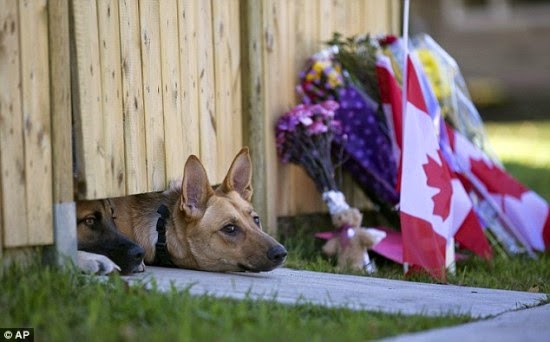 Corporal Nathan Cirillo was a single dad to a six year-old boy,
who had just started school. 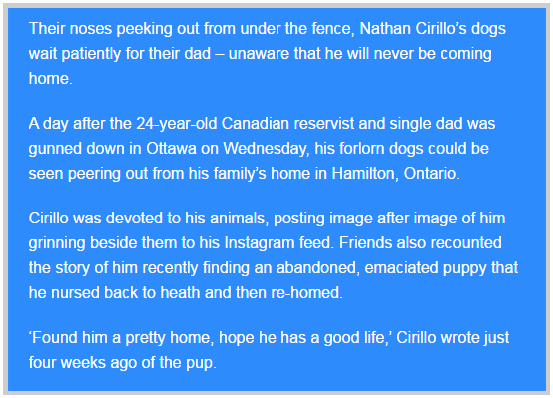 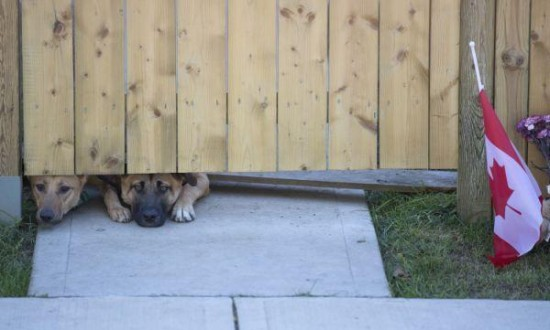 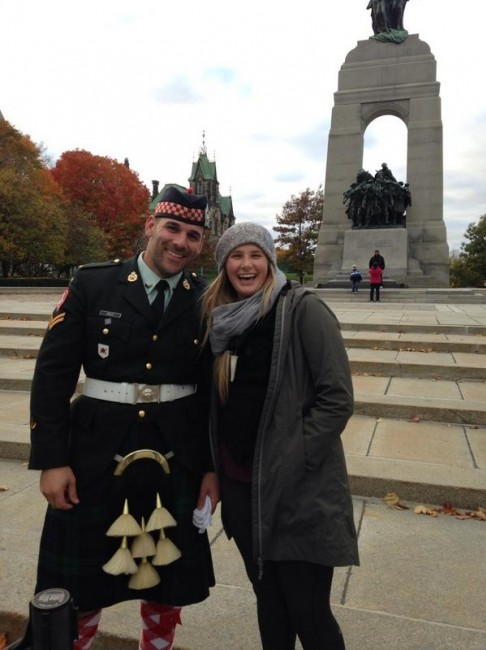 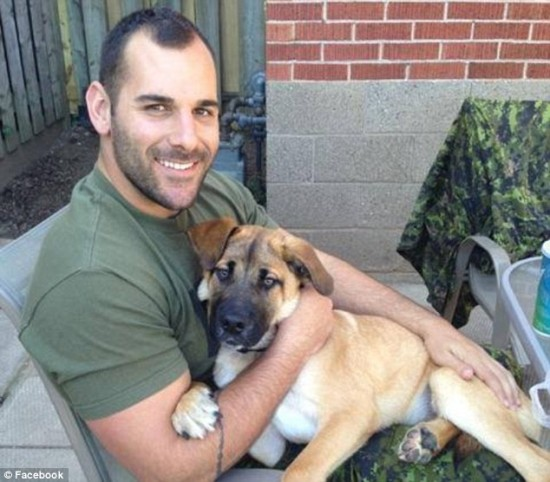 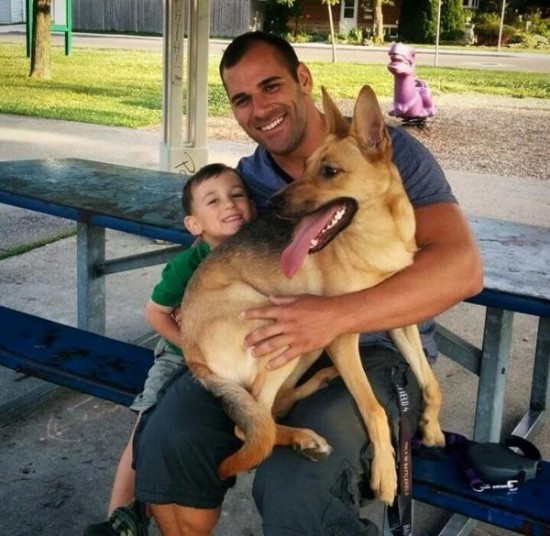 This photo was taken seconds before Corporal Nathan Cirillo was shot in the back and killed by an IslamoNazi Supremacist by the name of Joseph Paul Abdallah Bulgasem Zehaf Bibeau*, who then ran into the Canadian Parliament Building firing randomly...until a real hero, Sergeant of Arms Kevin Vickers, shot him in the head... 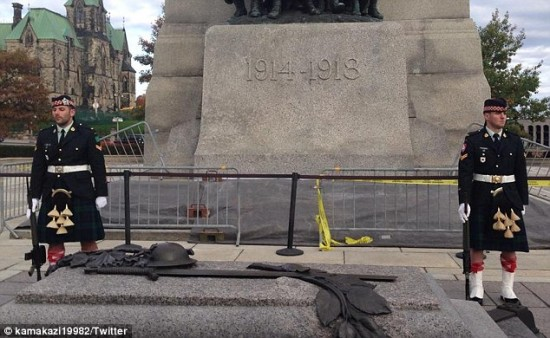 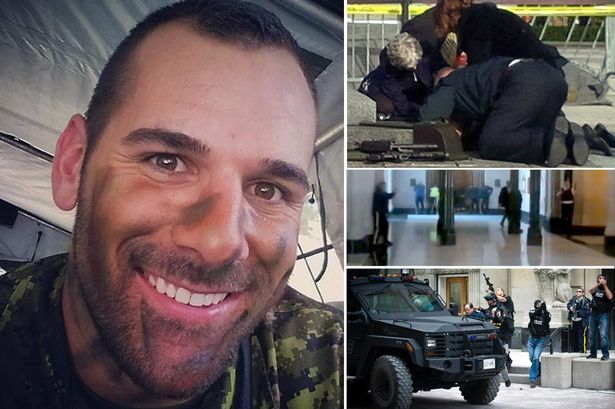 Here are more pictures of Corporal Nathan Cirillo, via a poster named Blue Sky at WeaselZippers.us.  Incredibly touching, Canadians are praying for him to have 'a great time in heaven' on his Instagram account. 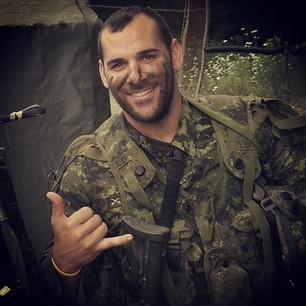 The cartoon that has moved the world... 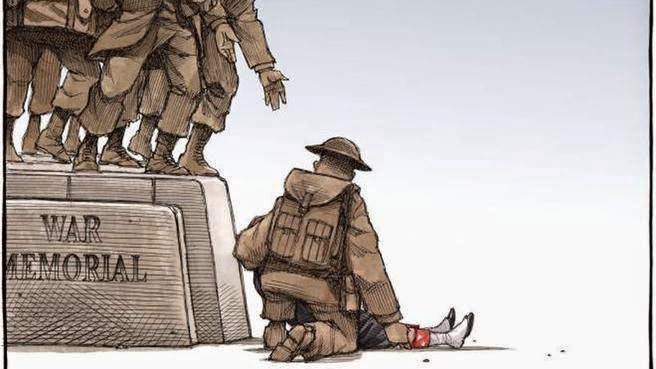 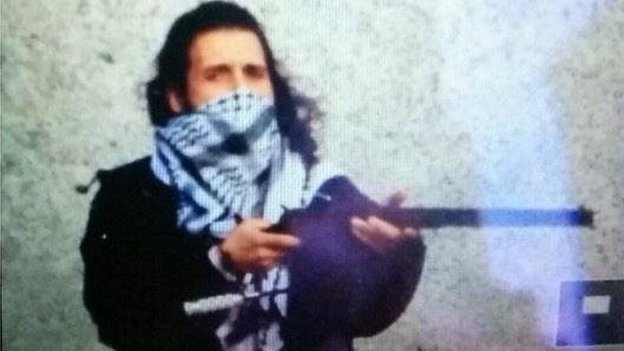 'A loner. A drug addict. A criminal. A drifter. And lately, an Islamic radical...But a closer examination of his past draws a somewhat different portrait: one of an increasingly troubled, mentally unstable man who initially may have embraced religion not as a political cause, but as an attempt to scaffold a disintegrating life.'

There The New York Times goes again. Remember when they claimed that Faisal Shahzad, the would-be Times Square bomber, who had traveled several times to Pakistan to train at terrorist camps, was driven to do what he did because he had lost his house to foreclosure a few years earlier?

And, Zehaf-Bibeau is no ‘recent’ convert to Islam despite what the media is reporting.


Court records in Montreal show Zehaf-Bibeau was born in Quebec on 16 October 1982 as Michael Joseph Hall to Susan Bibeau, the current Deputy Chair of the Immigration Committee at the Immigration and Refugee Board of Canada, after she had a brief relationship with Bulgasem Zehaf, a Libyan national who appears to have fought in Libya in 2011, according to The Globe and Mail. In an affidavit, Bulgasem Zehaf claimed that the couple had a 'rocky relationship', but, nevertheless, married in 1989.

Included in the aforementioned affidavit, Zehaf said, 'After his birth, his mother, Susan Bibeau and I renewed our relationship and I also established links with my son...I was entitled to...look after his education, his security, and to give him all my love.'

Court documents show that a man with the same name, who appears to be Zehaf-Bibeau, had an extensive criminal record for petty crimes in Quebec and Vancouver in the early 2000s. Twelve of the 13 cases brought against him in Quebec resulted in convictions. Four of them were for drugs possession – three for marijuana and one for PCP, for which he received 60 days in prison.

He was convicted of assault causing bodily harm in 2001 and received a suspended sentence and a fine. His longest sentence was for robbery, possession of break-in tools, theft and conspiracy in 2003, for which he was sentenced to two years in jail and three years probation.

According to CNN, in December 2011, as part of a psychiatric evaluation prior to a trial in Vancouver, Zehaf-Bibeau said 'he wants to be in jail as he believes this is the only way he can overcome his addiction to crack cocaine,' according to a psychiatric assessment provided by a Canadian court. The 2011 assessment continues, 'He has been a devoted Muslim for seven years and he believes he must spend time in jail as a sacrifice to pay for his mistakes in the past.' The psychiatric expert who completed the assessment wrote, 'I am unable to find any features of signs of a mental illness.'

A friend and fellow Muslim convert, Dave Bathurst, however, told The Globe and Mail:


'[H]e met Mr Zehaf-Bibeau in a Burnaby, B.C., mosque about three years ago. He said his friend did not at first appear to have extremist views or inclinations toward violence – but at times exhibited a disturbing side. 'We were having a conversation in a kitchen, and I don’t know how he worded it: He said the devil is after him,' Mr Bathurst said in an interview.

He said his friend frequently talked about the presence of Shaytan in the world – an Arabic term for devils and demons.  'I think he must have been mentally ill.'

Mr Bathurst last saw Zehaf-Bibeau praying in a Vancouver-area mosque six weeks ago. He spoke of wanting to go to the Middle East soon.'

RCMP commissioner, Bob Paulson, said officials were still investigating Zehaf-Bibeau’s motive behind the attack. Zehaf-Bibeau had recently applied for a passport. His application raised concern among the processors, and they contacted the RCMP to run a background check. After speaking to his mother on Wednesday, Paulson said the RCMP learned that Zehaf-Bibeau intended to travel to Syria.

According to The Guardian, Paulson also said on Thursday that Zehaf-Bibeau’s email address was 'found in the hard drive' of a Canadian who was charged by the RCMP with a terror-related crime. He said investigators were still working to understand the connection, if there was any, between to the two radicalised Canadian nationals. 'When we say a connection it is sort of the weakest of connections,' Paulson said. 'Clearly, given what’s happened, it’s strengthened.'

Police said they are investigating the now notorious photo of the shooter holding a gun with a scarf disguising the lower half his face. Who took the photo and where it was taken may offer important clues into the killer’s past that could shed light on his motivation for carrying out such a brazen attack.