Big Government Robs The Middle Class For The Same Reason That Willie Sutton Robbed Banks…That's Where The Money Is!

"Senate Democrats will push a one-year tax cut proposal for individual Americans earning $200,000 or less annually, setting the stage for a showdown in coming weeks with Republicans over extending the Bush tax cuts, according to a new plan circulating on Capitol Hill.  Couples with a combined $250,000 income will also be covered by the Democratic proposal."

Maintaining current rates for those individual earning $200,000 or less annually or couples with a combined $250,000 income IS NOT A TAX CUT.

I ask you to take note of the fact that Obama and the Democrats have gone from campaigning on making these "cuts" permanent to now offering a "one-year extension."

There is a reason for the change for those smart enough to understand math and to those of us who listen closely to the words Democrats say:

[From a 2010 article] "In the near term, House Majority Leader Steny Hoyer raised the possibility that Congress will only temporarily extend middle-class tax cuts set to expire at the end of the year. He pointedly suggested that making them permanent would be too costly.

Tax cuts enacted under former President George W. Bush are scheduled to expire at the end of the year, affecting taxpayers at every income level. President Barack Obama proposes to permanently extend them for individuals making less than $200,000 a year and families making less than $250,000 — at a cost of about $2.5 trillion over the next decade.

“As the House and Senate debate what to do with the expiring Bush tax cuts in the coming weeks, we need to have a serious discussion about their implications for our fiscal outlook, including whether we can afford to permanently extend them before we have a real plan for long-term deficit reduction.”

Following a speech before the Centre for American Progress, House Minority Whip Steny Hoyer (D., Md.) said Monday. 9 July 2012, he would support tax increases on those who earn less than $250,000 at some point in the future.

“The president initially has it about right, at the ($250,000 level). But I would be prepared to go lower at some time in the future than that.  Our economy is still struggling and I think going lower than that would have adverse impact on the economy. I don’t think going higher than that will have an adverse impact.” 
In 2009, the top 400 taxpayers paid almost as much in federal income taxes as the entire bottom 50 percent combined.


You will see a lot of news on this report. What you are unlikely to see, though, are these facts from the CBO report:
So when the President and the his supporters complain that the rich are not paying their fair share of taxes, and Warren Buffett suggests another tax to ensure that they start paying more, someone should show them this government report. If the argument is that America must ensure that the rich pay, it must just be rhetoric—because they are already paying.

THERE ARE COMING FOR YOU EVENTUALLY because, as I've always reminded: 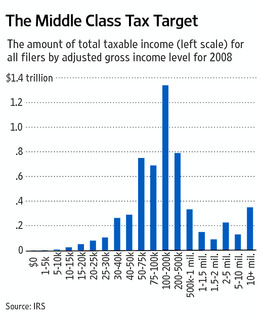 Big Government robs the middle class  for the same reason that Willie Sutton robbed banks…that’s where the money is!