The Riots & Looting in Ferguson Were Justified Because of 'Well-Placed Anger' or Something, Says MSNBC Guest 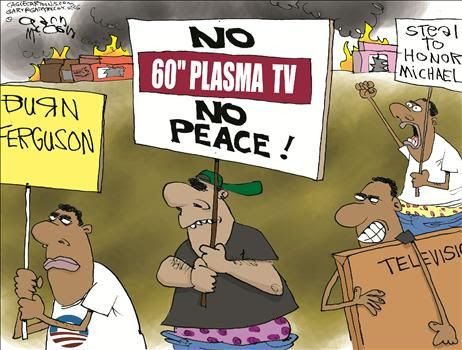 According to one of Ronan Farrow's Monday guests, the riots in Ferguson, Missouri were justified as “well-placed anger, disappointment, disenchantment with an aggressive militarized police force and with the apathetic government." Farrow agreed.

Farrow's two guests were Torrine Russell from Hands Up United and Philip Agnew from Dream Defenders. The two are organizing a national day for students to walk out of school in remembrance of Michael Brown. The host asked Agnew about the just-completed funeral of Brown. Agnew called it well-placed anger and followed it with a strange metaphor about making a cake.

Farrow: And we're still looking at those live images of people streaming out of the church.  Very emotional people. We saw people leaping to their feet angrily, sometimes euphoric at the prospect of change but also still a lot of anger there, and we've seen that on the streets. Philip, with so much rage surrounding this, how do you prevent these protests you're planning from turning violent?

Agnew: Well, first, I take issue with calling it rage. I think this is well-placed anger, disappointment, disenchantment with an aggressive militarized police force and with the apathetic government.

Let me ask you this. If I give you flour, if I give you eggs, I give you water, I give you milk, will you have a turkey sandwich? No, you have cake. And so the recipe is there. You have no jobs. You've got no opportunity. You have got low educational opportunities. And then you combine that with that militarized police force that's quelling up people who have righteous anger over something anybody should be angry over. I don't consider it rage at all. I consider it well-placed anger. I think youth around the country are going to conduct themselves in a very orderly manner because that is our nature. It's only turned violent when the police were in the, when the police in the community, when the police were aggressive, and when they came through a regular city block with tanks like they were in Afghanistan.

Farrow: Right. You make an important point about the recipe there, in that community and in so many communities around the country. Rage, anger, something that's an inevitable product.

'If you call it a riot (Rodney King riot) it sounds like it was just a bunch of crazy people who went out and did bad things for no reason. Riot implies to me wild, crazed, uncalled-for actions and I’m not so sure that’s quite appropriate for what took place in Los Angeles. It was unfortunate that it takes things like this rebellion to wake people up. I maintain it was somewhat understandable, if not acceptable...It was only a rebellion… a spontaneous reaction to a lot of injustice and a lot of alienation and frustration...There were mothers who took this as an opportunity to take some milk, to take some bread, to take some shoes.  Maybe they shouldn’t have done it, but the atmosphere was such that they did it. They are not crooks.'

Of course, they stole much more than some milk, bread, and shoes.

'Black man got beat, white trucker got beat, cops beat the rap, and my Latino but beat it with a love seat.  I ❤ LA!'

And, who can forget the righteous protesting and shopping in New Orleans in the immediate aftermath of Hurricane Katrina...

'Today's my lucky day!' is 'hood for 'well-placed anger.' 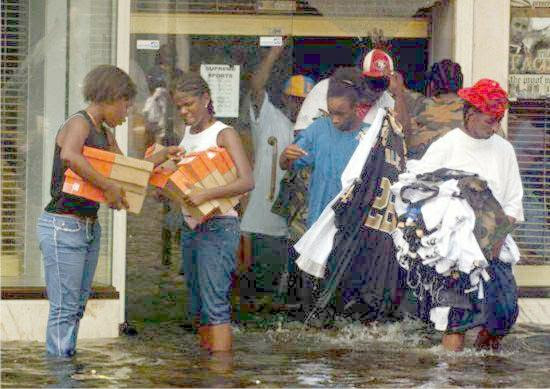 Just 'the essentials', you know? 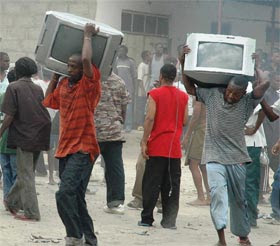 'Cuz, like, um, ya know, 'lectricity just magically comes from the wall socket...even when an entire city is without power. You were saying something about 'opportunity', Mr Agnew? 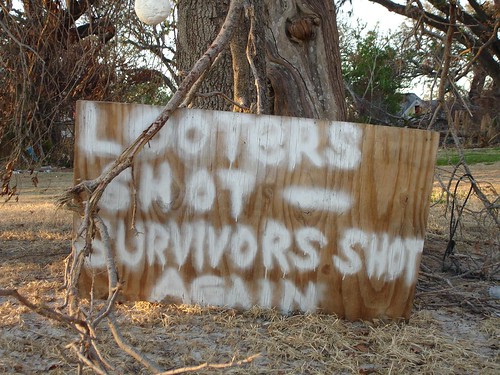